Just outside San Antonio’s scenic downtown, past the crowds that pack the Alamo and the River Walk, the city is becoming so expensive so fast that many Latinos simply can’t afford to live there anymore.

They have shaped San Antonio’s rich Mexican-American culture for generations. But like many minorities living in low-income and rapidly gentrifying urban neighborhoods, they’re struggling to keep up with some of the harshest side effects of economic development: rising property values and shrinking access to transportation. 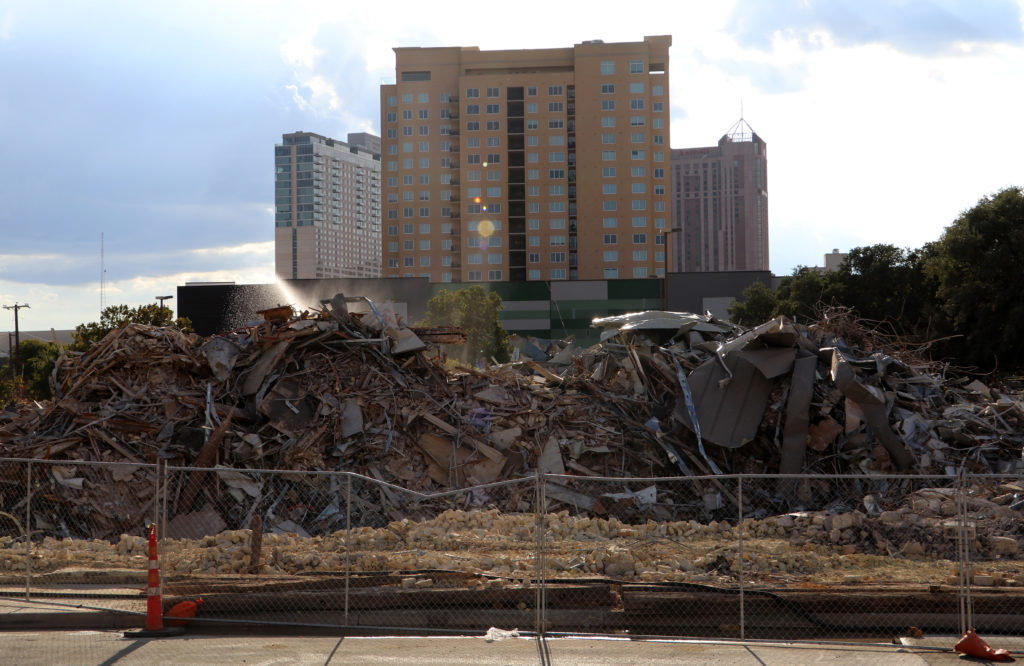 The East Side is experiencing a wave of gentrification as new construction takes over San Antonio, Texas. A new apartment complex on the East Side is shown on September 5, 2019 next to a demolished neighborhood clinic. (Latino Reporter/Laura Romero)

San Antonio’s East Side, and most recently, the West Side, are rapidly becoming inaccessible to Latinos and pushing them out.

“There is nothing being done to address the displacement of people who have lived all their lives here,” said Marlon Davis, an activist and member of the Tenants Union in San Antonio. “The character of the neighborhoods have changed. The local identity is gone.”

Hispanic residents make up 64 percent of the city’s population with 21 percent living below or at the poverty level, according to a report released this summer from the San Antonio Area Asset Funders Network and Texas Appleseed, a nonprofit promoting social and economic justice.

These residents don’t have enough money to cover a financial emergency. They have lower median credit scores, limited savings and have overall worse financial health outcomes compared to white residents.

A new apartment complex on the East Side of San Antonio, Texas next to an industrial equipment company warehouse on September 5, 2019. The East Side is seeing a wave of new development and gentrification. (Latino Reporter/Laura Romero)

The study reported that ZIP codes 78202 and 78208, located near the East Side, were among the four ZIP codes that had the highest poverty level and unemployment rate in the city.

And the problem is cyclical, said Maya Kearney, a doctoral student who specializes in gentrification in the Department of Anthropology at American University.

“Systems of support that working class communities rely on for survival are disrupted,” Kearney wrote in an email. “Their struggles, as a result of structural inequalities, are not addressed but displaced as well, which continues the vicious cycle of poverty.”

To tackle the rise of home values, the San Antonio Housing Authority is working with the U.S. Department of Housing and Urban Development to create affordable housing. Through an initiative created under the tenure of President Barack Obama, SAHA will use a two-year grant to help communities in San Antonio build mixed-income neighborhoods.

Although many support the policy, there has been some pushback by families who believe the policy ignores the root problem of displacement.

Besides the stresses of rising home costs, low-income Latinos also struggle with access to transportation. In a large, car-dependent city like San Antonio, transportation expenses drive up the cost of living significantly.

An analysis conducted by the City of San Antonio found that combined housing and transportation costs are considered affordable when they do not not exceed 45 percent of a person’s income. However in San Antonio, most low-income renters spend more than one third of their income on housing, causing expenses such as transportation to become disproportionately expensive.

When people don’t have access to a personal vehicle and depend on public transportation, their stress levels and physical health are affected. The challenges low-income Latinos face with public transit include unreliability and high costs.

As the Hispanic population grows, experts say, there is a greater need for better transportation and affordable housing.

Gentrification is not unique to San Antonio. Many cities across the country are struggling with how to balance development with the needs of long-standing communities.

But in this Mexican-American enclave, gentrification is threatening the very community that gave the city its identity.

Laura Romero is a 2019 NAHJ Student Project participant. She is a junior at American University with a major in communications, law, economics and government. She is an intern at ABC News with the investigative and justice department. Reach her at lr6714a@student.american.edu and on Twitter at @lauraromero1207.