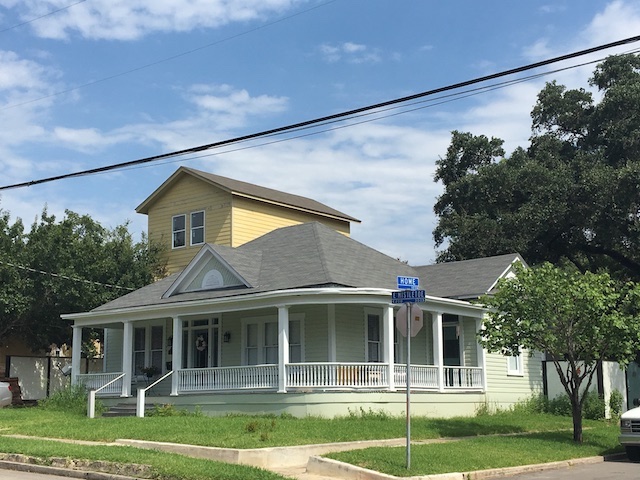 A Board of Adjustment member said he will ask for a re-vote in a hotly contested Tobin Hill case, after he and another board member said they got confused and cast votes the opposite way they intended.

The initial vote came Aug. 5 after two hours of testimony in which neighbors challenged the City Development Services Department’s decision to issue a building permit for a detached accessory dwelling unit at 225 E. Mistletoe that towers over the Tobin Hill neighborhood. (Watch video of the Board of Adjustment Hearing here.)

Joe Salinas, who lives directly behind the accessory dwelling unit, filed the appeal, arguing that the structure 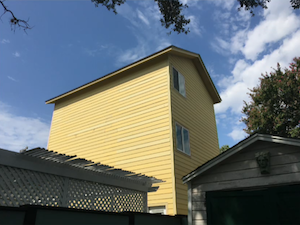 violated the Unified Development Code, city regulations that require it to “have a (roof) pitch, siding and window proportions identical to that of the principal residence.” (Read the code here.)

Tobin Hill neighbors nicknamed the structure “Jack and the Beanstalk” because of how it looms nearly three stories over the single-story main residence and other nearby homes.

Salinas’ challenge to the building permit was supported by the Tobin Hill Community Association and the Beacon Hill Area Neighborhood Association. Board members from each neighborhood testified in support of his appeal.

But the presentation by the city’s Development Services Division (DSD) further confused the issue,

showing board members an image saying that the Tobin Hill Community Association and Beacon Hill Area Neighborhood Association were “in opposition,” when, in fact, they supported Salinas’ appeal.

The DSD image also labelled some properties with a large red “X,” again suggesting opposition, even though residents who lived there so strongly supported Salinas’ appeal they came to testify before the board. Even Salinas’ property was marked with a large red “X.”

After listening to hours of testimony, four members of the Board of Adjustments sided with the neighbors and voted “yes” on the appeal. Seven members voted “no.” But after the meeting, Board members Henry Rodriguez and Maria Cruz said they voted “no” because they intended to vote against the structure and in support of the community.

“Tobin Hill and Beacon Hill are the tipping scales for me,” said Henry Rodriguez, a mayoral appointee, just before casting his vote. Minutes after the vote he told bystanders, “I vote with the community every time.'' When told his “no” vote went against the community, he responded:  “I messed up… It was very confusing.”

Board member, Maria Cruz, a District 5 appointee, agreed. “Yes,” she said. “They [the city] never should have approved it [the structure]  in the first place. I voted no... because... the way he talked about it and the way some of the other people talk about it. They didn’t like the building to begin with, so they were also saying no… The way he got the permission and the way they made the building, it doesn't look like something anybody would want in the neighborhood.”

San Antonio Chief Communications Officer Laura Mayes said that while it is rarely done in city board and commission meetings, Robert’s Rules of Order does allow a board member on the prevailing side of a vote to call for a re-vote at the next meeting.

When he was told about the Robert’s Rules provision by NOWCastSA, Rodriguez said: “I have no problem whatsoever in changing my vote… I will do it for sure.” He said he would call the board chair to have a re-vote put on the agenda.

Tobin Hill Community Association and Tier One Neighborhood Coalition member, Anisa Schell said she was relieved to hear about a possible re-vote on the issue: “I'm glad to hear that there is a possibility of another vote since the Board of Adjustment seemed confused after DSD’s presentation.”

During much of the two-hour hearing, representatives from Development Services Department parsed the meaning of the word “identical,” as used in the city code, which intended to ensure that accessory dwellings conform to the style and character of the main residence.

Hernandez said when building permits are approved, the city requires that the structure be similar, not identical, to the main structure. City staff insisted that the towering structure was similar to the 100-year-old main residence in many ways.

Hernandez also suggested the Board’s approval of the appeal overruling her department would have a sweeping impact on all accessory dwelling units in San Antonio ”If you approve the appeal, then the use of the word identical means that everything has to be identical,” she contended.

Schell, who testified in favor of the appeal at the meeting, expressed frustration with the city’s roundabout interpretation of the unified development code: “Development services tried to justify this permit by arguing over the definition of ‘identical.’ By no definition does this three-story structure meet the letter or the intent of the UDC’s requirements.”

Board Chair Roger F. Martinez, a District 10 appointee, acknowledged that the vote on the issue could be confusing, and promised to advise board members about what a “yes” vote would be supporting. (Watch the board wrap it up and vote here.)

Board member Donald Oroian, a Council District 8 appointee made the motion to approve the appeal. But he went on to argue against it and vote against it. He did suggest that the homeowner had “pushed the limits,” of the city code.

Board member Seth Patrick Teel, a District 6 appointee, also said he would vote against the appeal even though, “I do believe they (the contractor and homeowner) found some unique ways to meet the intent of the code, commonly referred to as ‘code-hacking.’ “

Dr. Lisa Katherine Zottarelli, the District 1 appointee, said “living in Tobin Hill, I know this neighborhood quite well. I get what you are concerned about.” But she said they should try to address their concerns by updating the Uniform Development Code. 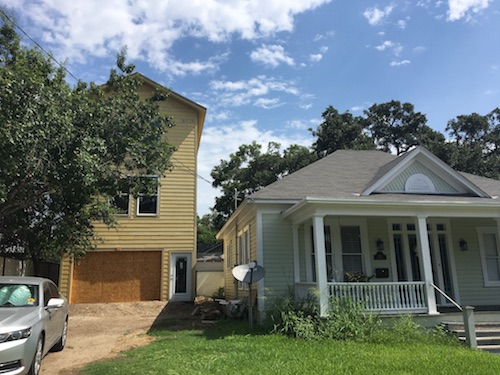 “It’s unfortunate that something was allowed to be built to this level of completion, but I still find that there was an error in reviewing that, and there are too many dissimilarities in the appearance of the ADU to the residence, to where it cannot be, in my mind, said to be identical or even closely similar.”

When the roll was called, board members voting against the appeal did so with the oblique phrase, “No, I do not concur with the findings of fact.”

“Yes, I do agree with the appeal,” Martinez said, casting the fourth vote of support to the seven “no” votes. “However, in this instance the board has selected to support Development Services, so that’s where we stand on this.

“Thank you for attending, this was very trying… in fact, in this last case, it was a very difficult decision, it was down to the second. But I do believe that the neighborhood has the right to have some input.”

Disclosure: Anisa Schell and members of the Tobin Hill Community Association, Beacon Hill Area Neighborhood Association and the Tier One Neighborhood Coalition have been financial supporters of NOWCastSA, a nonprofit, nonpartisan news organization that is funded in part by  gifts, grants and sponsorships from individuals and organizations. NOWCastSA’s news judgments are made independently and not on the basis of donor support.  A list of funders and donors can be viewed here.