¡Vamanos! San Antonio's Julián Castro is running for President in 2020 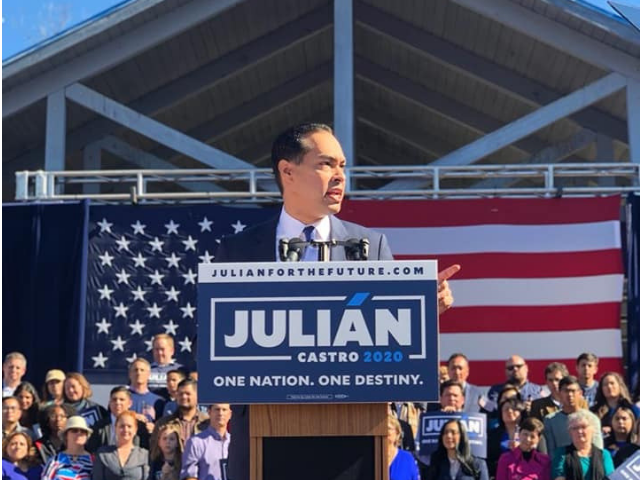 The No. 68 Via bus took Julián Castro and his brother to school when they were growing up on the West Side of San Antonio, along Guadalupe Street and through a few of the most low-income areas in the city. On Saturday, Jan. 12, 2019, the bus took Castro through his old stomping grounds for a different reason: As he explained on this video, he took the bus to the historic Plaza Guadalupe to announce that he's running for president of the United States.

"When my grandmother got here almost 100 years ago, I’m sure that she never could have imagined that just two generations later, one of her grandsons would be servings  as a member of the United States Congress and the other would be standing with you here today to say these words, I am a candidate for president of the United States of America," Castro said, shortly after stepping onstage with his wife Erica Lira Castro and their two young children Carina and Christian.

Watch our live stream of his video below.

Castro was most recently the U.S. Secretary of Housing and Urban Development under President Barack Obama, a position he held from 2014 to 2017. But has been directly involved in local San Antonio politics since 2001, when he the youngest city councilman elected to serve the city at age 26, a position he held for District 7 until 2005.

He ran for mayor against Phil Hardberger that year, but lost and opened his own law practice. He ran for mayor again in 2009 and won that election and the subsequent two elections. Castro released a memoir, "An Unlikely Journey: Waking Up from My American Dream" late last year. (Watch a video of him discussing the book at San Antonio Central Library here)

Castro's first focus was on his rise to where he is today with the help of his actvist mother Rosie Castro, brother and U.S. Congressman Joaquín Castro, and his community.

"I want you all to look around this neighborhood There are no frontrunners that are born here. But I’ve always believed that with big dreams and hard work, anything is possible in this country,” he said.

He put forward an progressive agenda, first saying he would work to expand Pre-K 4 SA, an early childhood program that gives children a jumpstart in their education, to Pre-K 4 the USA. He went on to talk about criminal justice reform, the Black Lives Matter movement, raising the minimum wage, affordable housing, climate change, and immigration reform.

"Yeah, we have to have border security, but there's a smart and humane way to do it. And there is no way in hell that caging babies is a smart or a good or a right way to do it,” he said, to thunderous applause and cheering from the crowd.

Hundreds of people stood in line for hours waiting to get into the plaza at 10 a.m., with some people arriving before 7:30 a.m. to ensure they got the best spot on the plaza, directly in front of the red, white, and blue adorned stage. The Thomas Jefferson High School mariachi played as people poured into the plaza, quickly filling the 3,000 capacity space. As the sun blazed down and Castro yelled "Vamanos!" to the crowd as he walked offstage, Tejano singer Selena Quintanilla Perez' song "Baila Esta Cumbia" started to play.