‘No Ban, No Wall’ protesters take to San Antonio streets

Liberty League of San Antonio, a grassroots organization, organized the peaceful event, which went viral via a Facebook invite.

Protesters, ranging widely in ages and backgrounds and abilities, first gathered at Travis Park. From there they walked with signs in hand, down Broadway and South Alamo Street into part of Southtown.

The marchers then returned north and arrived at U.S. Sen. John Cornyn’s downtown office on Navarro Street, where a staffer for the Republican Senator was due to receive many of their signs and messages. No trouble or agitation was reported during the event.

View a photo gallery of the protest below. 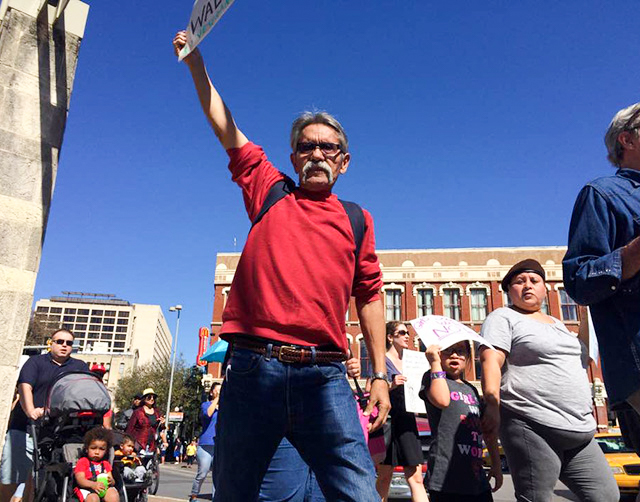 The protesters chanted “No Ban, No Wall!” and “Up with education, down with deportations!” While most of their signs and chants concerned immigration, some marchers carried signs excoriating Trump and fellow Republican leaders on other issues, such as Trump's pre-election dealings with Russia and whether that country interfered with the presidential vote.

But much of the protesters’ message was clear: They do not support President Trump’s push for a wall along the Mexican/U.S. border. Nor do they back Trump’s executive order temporarily barring citizens from seven Muslim-majority nations from entering the United States.

That initial executive order sparked a wave of protests nationwide, and caused commotion at several U.S. airports where refugees and green-card holders were detained or prevented from entering the country. (See NOWCastSA coverage here.)

The Liberty League-led protesters also denounced a series of raids that federal immigration authorities have been conducting around the country.

Trump had signed another executive order, expanding the number of undocumented immigrants that could be detained or possibly deported, including those charged with a crime but not convicted, and those who have abused public safety net programs. 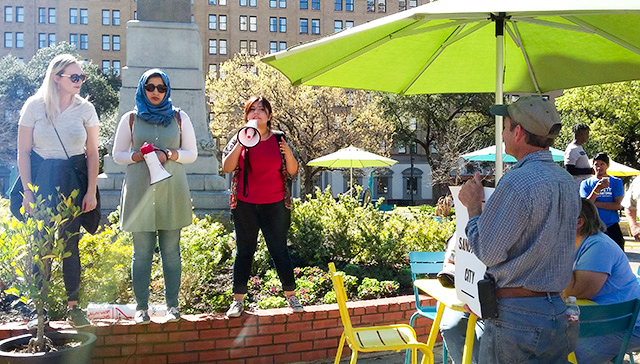 Immigration advocates worry that undocumented immigrants who have never been proven as criminals may be caught up in these wider round-ups. Advocates also worry that so-called “DREAMers” who are supposed to be protected under former President Obama’s Deferred Action for Childhood Arrivals (DACA) program maybe in danger.

Related fears were realized in San Antonio recently when Josue Romero, a 19-year-old native Honduran, spent two days in custody before being released by U.S. Immigration and Customs Enforcement agents.

Local media reported that Romero had received a work permit under the DACA program, which was created in 2012 to protect young undocumented immigrants.

Romero was 4 years oldwhen his mother, Norma Velasquez, arrived in the United States, as their family sought to escape violence and poverty in Honduras.

Deferred action can be revoked for a “significant misdemeanor,” designated for charges involving allegations of trafficking or distribution.

According to media reports and Bexar County records, Romero was arrested Feb. 14 for possession of two ounces or less of marijuana, a Class B misdemeanor.

The Refugee and Immigrant Center for Education and Legal Services (RAICES) was in contact with Romero's family during his detention. Officials with RAICES voiced concern that San Antonio police and Bexar County sheriff's deputies were working with ICE agents.

RAICES Texas' Facebook page carried a message from organization officials from Feb. 17: "We do not know what specific mechanisms are in place with either the San Antonio Police Department or the Bexar County Sheriff's Department to facilitate their collusion with Immigration and Customs Enforcement (ICE), but we do know that collusion is happening and it is aggressive. RAICES currently has a petition to Bexar County Sheriff (Javier) Salazar to keep ICE out of Bexar County."

No elected officials were on hand for the Liberty League-led protest, but a representative of U.S. Rep. Lloyd Doggett  (D-35) hared words of encouragement on behalf of her boss.

"You’re not alone, that we will continue to stand with you, and resist this president’s unfair, unjust policies,” said Doggett aide Eva Gutierrez.

Gutierrez said the Democratic Congressman wanted to applaud the Liberty League of San Antonio and similar groups in their efforts to rally opposition against the Trump Administration.

“Only by organizing and informing our neighbors that we will make a difference,” she added.

“I’m so glad to be seeing young people coming out, after November (elections), and stepping up and taking over some of this local organizing and having events like this,” Galloway said. “Today, this is a statement that this will not go on in San Antonio. No ban, no wall, no ICE, nothing like that.”

Galloway also told the crowd he had talked with Texas State Rep. Diego Bernal (D-123) prior to the march. Bernal was unable to participate because he was tending to an ill family member. But Galloway said the local Democratic state legislator was “very invested in this cause and he stands by us as well.”

Before the march got underway, lead organizers Lauren Hasha and Besan Radwan reminded the marchers to be peaceful and not to be encouraged by any outside agitators.

A small group of self-proclaimed “peacemakers” walked with their fellow protesters to ensure they used only sidewalks during the march. A few members of the Brown Berets also accompanied the group to make sure no potential of violence were to arise. A small police detail did briefly block intersections to ensure the marchers’ safety.

Radwan and Hasha said the march was a means to say there is a rising united front against Trump’s immigration stances nationwide. People must stand up for their civil rights, she added.

“America is a diverse place. It’s always has been and it always will be,” Radwan told the crowd. “It’s people like you who are really informed on that. Your voice matters.”

Hasha told the crowd the Liberty League will hold a variety of community events in the future. 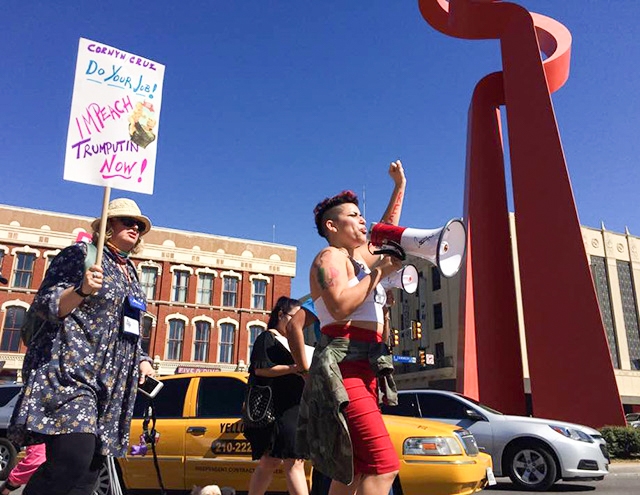