With the theme of “Magical Universe,” San Japan's 11th annual Labor Day weekend celebration of anime and manga attracted 18,500 people, according to organizers. The 2018 convention filled the expansive Henry B. Gonzalez Convention Center and Grand Hyatt and Marriott Riverwalk hotels with mainly young fans, outfitted as their favorite characters.

San Japan organizers have prided themselves on welcoming fans of all ages, backgrounds and abilities. Some panels this year covered how anime, manga and American superhero comic books have reflected the evolution of society’s attitudes toward LGBTQ livelihoods, body positivity, and cosplaying as a person of color.

The group Southern Cospitality returned to San Japan with several activities, including an annual discussion on LGBTQ representation in anime and manga.

This year's discussion was led by D-Maru, who briefly explained a history of anime and manga portrayals, which typically in past decades were more negative and one-dimensional.

On the other hand, the lives of transgendered individuals still are not fully reflected in today’s anime and manga.
“Yuri!!! on Ice” and “My Brother’s Husband” are two of the more popular series that feature developed homosexual characters and explore their lives in an honest manner.

“You feel like this is my experience,” D-Maru said in describing “My Brother’s Husband.”
“My Lesbian Experience with Loneliness” is a well-received manga autobiography following Kabi Nagata and her coping with mental health challenges and exploring her sexuality as a young woman.

Many fans and critics have especially praised Nagata’s willingness to recall the more difficult and confusing episodes in her younger days. “It gets real, sometimes too real for some folks,” D-Maru said.

Fans and critics of works such as “My Lesbian Experience…” say they are thankful for such products because they further help to provide a place for LGBTQ lives within Japanese fiction. “Representation matters,” D-Maru said. “There’s no world where it doesn’t matter.”

The panelists also explained how the slur “trap” is practically banned from anime and manga with LGBTQ stories. The slur has been used to describe a trans woman with male genitalia and female secondary sex characteristics. D-Maru and his fellow panelists described the word as a dangerous, hateful term that rivals the worst slurs commonly used against homosexuals and people of color.

Check out this short video for more on what the Southern Cospitality panel said about the slur.

Another panel delved into a history of LGBTQ characters in the superhero genre. For mainstream comic book producers such as Marvel and DC, homosexuals began slowly popping up as minor characters, some of which served purely as curiosity pieces with stereotypical personalities.

Some characters featured with dark subplots, some of which reflected the sobering reality of the unfolding AIDS epidemic. Others, such as Tony Mantegna, part of DC’s Secret Six series, were given disabilities - in his case, a loss of hearing — that they ultimately overcame.

Indeed, there were many visitors to San Japan who didn’t let their physical disabilities keep them from enjoying the festivities. Some made use of the SJ Cares booth where staff provided assistance, such as service dogs.
San Japan staff had a room that served as a safe space for visitors who may have sought sanctuary.

The convention had exhibitors such as disABILTYsa, a local nonprofit that facilitates events such as the upcoming AccessAbility Fest, and the Fiesta Especial festival.

There was also a blood drive in which the chance to score free Bill Miller Bar-B-Q and San Japan swag spurred a steady line of convention-goers-turned donors throughout the weekend.

As a result, Connect for Life collected 150 units and $130 in donations to benefit the South Texas Blood and Tissue Center.

The local chapter of Doctor Who Fans Unite, which helped to organize and staff the blood drive, was thrilled with the drive results.

“As always, we couldn't have done it without your support,” DWFU members said on their Facebook page. “If you weren't able to make it out to donate with us this weekend, please consider donating at one of the sites in your community. Remember, one donation can save as many as three lives.” 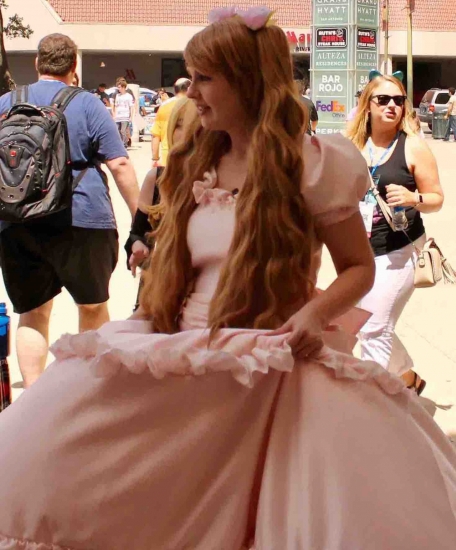