At 10 a.m. on Sept. 24, San Antonio- and Austin-area sharpshooters will descend upon Brick at the Blue Star Arts Complex prepared to capture life in the act of life for 4×5 Photo Fest, all the while listening to and learning from renowned local and national photographers.

The festival which is coordinated by San Antonio photographers and artists Scott Ball, Josh Huskin and Shannon Gowen. The 4×5 Photo Fest will spread its wings  with this inaugural one-day celebration. The intentions of the festival are simple: to build community and foster creativity among photographers of all experience levels.

While organizing a festival of any kind can be taxing, and while most event organizers plan a year or more in advance, the 4×5's creators dove head first into the olympic-sized feat that is festival planning. In May, photojournalist Scott Ball initiated the conversation of hosting a photography festival with local artist Shannon Gowen. Though both Gowen and Huskin credit Ball with conceiving the idea, Shannon Gowen's co-creators adamantly cite her as the tireless force that connected the puzzle pieces to bring 4×5 to fruition. Using her resources, Gowen helped Ball and Huskin coordinate and manage the community facet of 4×5.

The original idea, Ball says, was to just have a place where photographers could set up and display their prints.

That, Ball feels, is what he and his fellow organizers really wanted—the educational aspect.

Indeed, Gowen shares that coupled with education they are striving to bring together all these photographers so that they can make connections and start building relationships to better facilitate showcasing their work.

With education and community impact at the forefront of their minds, appealing to multiple learning styles was key for the organizers. To achieve this everyone called in favors. The organizers made a list of all the people they would want to include and began reaching out.

“A lot favors were called in or given out. Many of the photographers and editors that are speaking on these panels or talking are friends or friends of friends,” Huskin said.

Through their joint efforts, Ball, Huskin and Gowen were able to secure photographers and artists from around the city and country, including legendary photographer Dan Winters. Using a previous working relationship with Austin Monthly's photo editor, Huskin called his industry colleague to share that a photo festival was in the works, and he and his co-creators wanted to secure Winters as a speaker.

“I remember I got an email saying, 'Hey, Dan's in,' and we all kind of freaked out,” Huskin recalls.

From there, the number of photographers kept growing. With photographer Winters secured, the 4×5 organizers set out to develop an all-encompassing selection of speakers that include award-winning photojournalist and documentarians, among many others.

Given that community building and connectivity is at the center of 4×5, it is apropos that documentary photographers Benjamin Rasmussen and Michael Friberg will be sharing their project “By The Olive Trees.” Rasmussen and Friberg, based in Denver and Salt Lake City, respectively, collaborated in 2013 to document the lives of Syrian refugees in Jordan who fled the ongoing civil war. Friberg explained that the project was inspired by both the plight of displaced Syrians and the mismatched narrative that photojournalists were presenting to the global audience.

“It was just cliched photos of a refugee camp, even though 75 percent of the refugees in Jordan don't even live in camps but in urban situations,” Friberg said.

Their goal, the pair said, was to challenge the traditional narrative that presents refugees, or people in poverty, as both experiencing and defined by their suffering. Indeed, Rasmussen explained that both he and Friberg largely work as magazine photographers capturing celebrities, athletes and politicians, or “people who society in general has decided are 'important.'” From their mutual experience, those public figures are photographed drastically different than “victims, such as the poor, marginalized and displaced.” With this work, Rasmussen explained, they are “challenging those visual languages and using it as a way to help viewers connect with individuals impacted by this conflict.”

Naturally, the question arises of how two documentarians from Salt Lake City and Denver who collaborated on a project in Jordan came to decide to present their work in San Antonio.

Re-enter the contacting of friends, friends of friends and old classmates. It should come as no surprise in our ever-shrinking world that photographer Friberg met Huskin in high school in West Texas whilst playing in a hardcore band that toured “with his actually good hardcore band.” As is the way of life, the two lost touch and later re-connected. It was during their recent talks, Friberg recounts, that “he invited Ben and I to present and speak at the festival, and we jumped at the opportunity to share work in Texas.”

“That and since leaving Texas, I will take any excuse to come back and eat breakfast tacos,” Friberg half-jokingly shares.

Breakfast tacos aside, Friberg expressed that a point of excitement was the chance to share their work with a new audience whilst having an educational conversation with attendees about new ways to distribute and make impactful documentary work.

Aside from drawing the attention of photographers from across the nation, there was a buzz amongst local industry colleagues that something was in the works. Such was the case with local, award-winning photojournalist Carolyn Van Houten.

“It's a really big deal,” Van Houten said. “They (organizers of the festival) pulled something off that few people could actually pull off.”

The payoff of pulling off such a difficult task is largely the coalescing of the community, not just photographers but San Antonians. There's no shortage of photographers in San Antonio, but the united photography community is not necessarily as strong as it is in other cities across Texas.

“I think what's great is that they're bringing everyone together and doing actual community building in San Antonio that is bringing in people from across the city, and the caliber of speakers is really high,” Van Houten said.

Coupled with community building comes the educational aspect that Van Houten and her fellow speakers are voracious in spreading. Van Houten said she hopes 4×5 will help instruct and guide aspiring photographers with desires to conduct long-term projects on how to properly execute them.

“Hopefully 4×5 can either inspire people who have some fear stopping them from doing the work they want to be doing and push them to go do it, or if they have an idea then it can help them figure out how to execute it and look at the different ways to tell a story,” Van Houten said.

4×5 Photo Fest is a defining event for both regional photography and San Antonio at large. It represents not only an opportunity to network and mingle with other industry professionals, but the chance to legitimately learn from some of the most renowned local and national photographers. The possibility to listen to speakers like Winters, widely regarded as one of the most identifiable and sought-after editorial photographers in the world, would typically cost hundreds, if not thousands, of dollars and require a trip to one of the other major U.S. cities.

Yet, 4×5's organizers have brought major national names to the Alamo City and made the entire experience free for the public. Even the speakers have recognized this as a shift in being able to make education from high-quality sources at the top of their field available to an audience that may otherwise have not ever been able to access these people.

This sentiment is shared by the festival's organizers on a major level. Indeed, Ball has expressed that their return on investment is not measured in dollars, but rather in knowing that the festival, did something bigger for the city.

Whether you're interested in submitting work for the photo swap ‒ which is accepting submissions until Sept. 15, 2016 ‒ attending a talk from one of the venerated speakers, or just want to see good photography, 4×5 is an event intended to appeal to a citywide audience.

For one Saturday in September, San Antonio will be in full focus. Four events, five artist talks, a photo swap, photowalk and after-party, all of which are free, will unite both the photography community and city in appreciation for the art of photography. 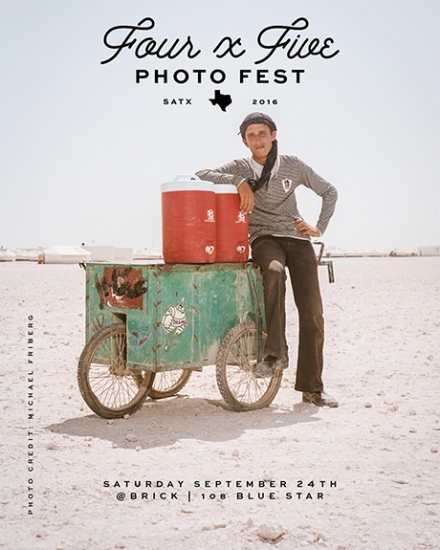