Ten families from Bonham Academy left San Antonio to join more than 11,000 education advocates from throughout the state at the Capitol in Austin to participate in the Save Texas Schools Rally.

Carrying their green Bonham Academy sign, the children marched Saturday, March 12 around the Capitol complex for an hour, chanting "Save Our Schools."

"This is Campbell's first rally," said Barbara Taylor, mother of a kindergarten student at Bonham. "It's for a good cause."

The state is considering a $9 billion to $10 billion cut in education funding for the upcoming biennium because the state is facing a $27 billion budget shortfall. The education advocates are asking lawmakers to tap into the so-called raining day fund, a $9 billion reserve of funds. They are also asking Governor Rick Perry to agree to accept $830 million in federal funds for education. And finally, they are asking lawmakers to correct the school funding system.

The speakers list included educators and leaders from throughout the state, including San Antonio Mayor Julian Castro and Northside ISD Superintendent John Folks, who inspired loud cheering with this line: "Legislators, do not balance this budget on the backs of children."

There were some state legislators in the audience, including Rep. Michael Villarreal,a Democrat from San Antonio.

"I am so energized by the crowd that's here today," said Villarreal, who has a daughter in the first grade at Bonham. "I have never seen this kind of outpouring for any cause in the last 11 years. So, I am hopeful. But we need to keep it the pressure up, because ultimately if the legislature does not prioritize education and does not balance this budget in a balanced way, then we need to hold them accountable come election time."

Update from Joe Ruiz, 10:17 a.m., Mar. 15: We were contacted Monday evening by Phil Ostroff (AKA: The Guvnah on Flickr) about using his name instead of his Flickr handle. By using the Storify tool (a tool I used on Saturday to create the collection below), it calls in whatever the user has chosen as their handle, in this case, "The Guvnah." Mr. Ostroff has since changed his handle on Flickr, so I have replaced the same photos so they show up with his given name rather than his handle. We appreciate Mr. Ostroff asking us for the change, and we especially appreciate his fine photos, which help tell a better story of Saturday's event. 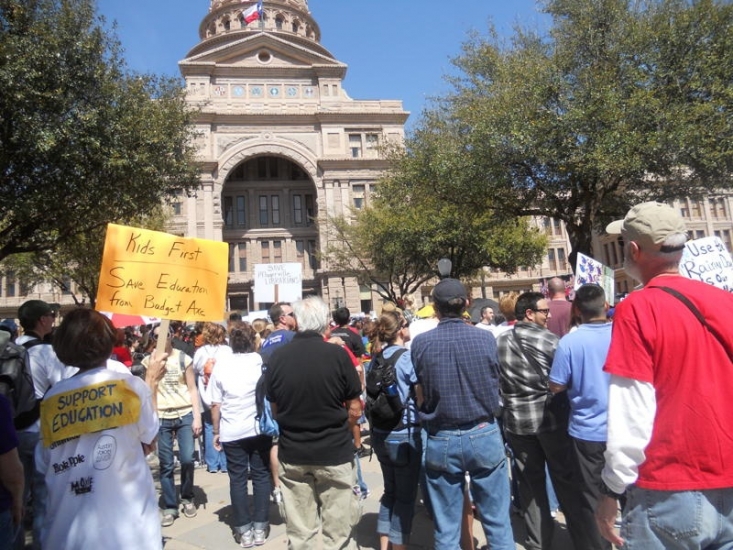