Marchers came from the North and West sides of San Antonio. Some stepped out their East Side doorsteps. Others hailed from Long Island, New York, and Baltimore. They all came to San Antonio’s Martin Luther King Drive to commemorate Dr. Martin Luther King, Jr. during the 25th annual official march, believed to be the largest such march in the nation.

San Antonio Police officials declined to give a crowd estimate, but the parade of marchers stretched a mile long, with crowd organizers believing that it exceeded past years’ estimates of 100,000 people.

“A lot of us weren’t able to be in the original march. So what we do is come to this march and commemorate what he did and to bring everybody to accomplish his goals,” said Moses Johnson, who lives in Converse and joined his childhood friend, Sid Miller, for the march.

“This is the one time that I can see that everybody comes together and I look forward to seeing friends and people that I haven’t seen in a long time,” said Miller, who lives in Live Oak.

The broad river of humanity honoring King was wide enough to include Girl Scouts and Boy Scouts, the Stonewall Democrats of Texas, sororities and the Masons, as well as volunteer groups from corporations such as Valero and Chase, and the Occupy San Antonio protestors.

“I believe that his memory, his legacy, his influence goes beyond the significance of being an African-American male or being African-American,” said Ray Howard, who has been marching since he arrived in San Antonio in 2007. (Editor's Note: Howard is a former board member of NOWCastSA)

“He has been able to expand his message of hope and promise and justice to all people. Every year that we are privileged to celebrate his birthday is an opportunity to recommit ourselves to his dream and his mission.”

Daniel Graney, president of Texas Stonewall Democrats Caucus and a San Antonio resident, said his group was marching “in solidarity with all people for justice and equality.”

“Dr. Martin Luther King was a transformational figure in our history,” said the 62-year-old Graney. “He stood up to injustice and discrimination of any kind. And I’m sure if he was alive today that he would stand up for GLBT people. What is important is that your life begins to end when you become silent about things that matter. When people make racist comments, we all need to stand up and say, ‘That’s not funny.’”

At his home on the corner of Ferguson and Martin Luther King Drive, former city councilman Joel Williams was hosting friends who were promoting the re-election of Barack Obama.

In the eight years since he moved to his home on Martin Luther King, Williams said, he noticed that the group of marchers has expanded to include people from suburban neighborhoods in San Antonio.

“There are communities from Windcrest and other communities that have made this grow bigger and bigger,” Williams said. “The spirit of Dr. King seems to infest all of us as Americans.”

On the corner of Lacey and Martin Luther King Drive, halfway through the march route, Diane Lozano said she has been hosting breakfast to friends and relatives coming down for the march for 20 years. Last Friday, she said, a group of workers from Home Depot painted her home to get ready for the march. This morning, she served breakfast tacos, cinnamon rolls, fruits, sausage and mimosas.

“There has been improvement, a lot of positive things that have gone on in my street since the march started,” Lozano said.

On Monday, Lozano was capturing video of marchers on her laptop computer’s webcam.

While this is cited as the 25th anniversary of the march due to the city of San Antonio's official participation, marches commemorating Dr. King's legacy were held for years prior on the city's East side.

Along Martin Luther King Drive, Heather Clifford, a recent graduate of the University of Rochester, pointed out the mural of Martin Luther King that she and other City Year volunteers painted and the home that they spruced up. And she pondered the significance of King’s contribution.

“He gave up his life for a greater cause,” said Clifford, 22. “And his legacy of service is definitely what has helped me continue with my service,”

Toward the end of the march, Orlando Woods, a 50-year-old San Antonio resident, who suffered three strokes and limps with a brace on his left leg, took a break to talk about why he has marched in each of the MLK marches since he had moved to San Antonio in late 1985.

“I march in memory of great grandmother Hattie Robinson Woods and my great great grandmother Roxie Washington and what they have endured, how they didn’t have the right to vote and now I have that luxury,” Woods said. “She would definitely be impressed that San Antonio would have the largest march in the nation. San Antonio is a large melting pot. If not for Martin Luther King, we would not have had Henry Cisneros as mayor."

See photos from volunteer participants Devonne Adams and Mary Ellen Burns, as well as a collection of reaction from social media below. 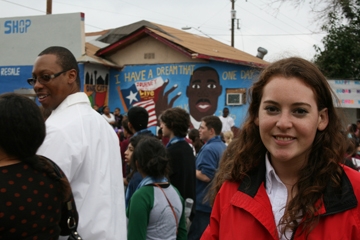