REPLAY THE VIDEO of NOWCastSA's webcast of the Save Texas Schools San Antonio regional conference on Feb. 3 at the Northside Activity Center.

At the conference, education advocates told the audience of about 300 parents and educators to focus on the November state elections and to take action against state lawmakers who voted to cut $5.4 billion in education funding last year.

“The fight begins now. It doesn’t begin in January 2013,” Northside ISD Superintendent John Folks told the group. “It’s about going to the polls, getting your friends, relatives, neighbors, pets, everybody out there and voting and electing candidates that support public education. That’s what it’s about.”

“There is no question about it, the state of Texas has totally failed in its mission to fund public education,” Folks said. “It’s one of the most inequitable and inadequate systems.”

Folks was among a bevy of public figures who addressed the group in the first part of a two-day regional conference that Save Texas Schools organized leading up to its statewide rally on the Capitol on March 24.

The second day of the conference included workshops to help people learn about the state's school finance system, how to become organize grassroots organizers, and how to understand the state’s new student exams.

The state’s new student exams – the STAAR – came under fire during the four-hour evening event on Friday.

“We need some action around reforming our testing system,” Rep. Mike Villarreal said during a panel discussion with other local state lawmakers. “It is a joke. It has instilled a culture in too many schools that is about regulatory compliance.”

Slideshow from Save Texas Schools Conference

According to Villarreal, at least 8,243 schools requested waivers and were approved to exceed the state’s class size limit of 22 students in elementary classes during the 2011-2012 school year.

During the discussion, Villarreal and fellow Democrat, Sen. Leticia Van de Putte frequently disagreed with their Republican colleague, Rep. John Garza, who told the group he advocated vouchers to reform schools and increasing consumption taxes as a way to make up for decreasing school funds from property taxes.

But on the matter of the state testing, Garza seemed to agree with the two Democrats.
“I agree that the STAAR needs to go,” Garza said.

Van de Putte described the legislature as “hostile” toward public education, and said in turn, school districts are fighting back with lawsuits challenging the legality of the school funding system.

Addressing the many teachers at the event, Mayor Julián Castro recounted his experience as a young college graduate, working as a permanent substitute at Jefferson High School, where class sizes reached up to 35 students.

“By the fourth day, I could tell I was in over my head,” Castro said. “Every day after I went home, I felt like I needed a nap. I felt I had worked hard. And I had. This taught me that teaching is hard work.”

Like other speakers at this event, Castro advised the group to mobilize other voters to change the make up of the state legislature.

“The only one way to change the direction is to lend our voice to a movement, to get out there and vote,” Castro said.

“The legislative cuts that were mandated this past session hurt everybody,” said Frances M. Guzmán, education associate for Intercultural Development Research Association, an education advocacy nonprofit organization based in San Antonio.

“Usually when there are cuts, it’s the property poor school districts that bear the biggest brunt. But everybody’s getting these cuts. Class sizes are getting bigger. They’re letting go of teaching staff. Afterschool programs for kids needing assistance are getting eliminated. Everybody is being affected.”

For more information go to the Save Texas Schools website.

This article was originally published before the conference and was updated after the opening events to include the speakers' remarks and a slideshow. 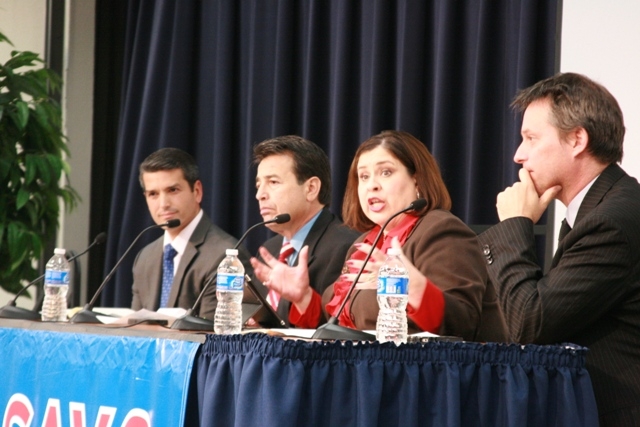