After widespread outrage, commission rejects edifice that would tower over Hays Street Bridge

In a victory for the Hays Street Bridge Restoration Group and its recently deceased founder, Doug Steadman, the Historic and Design Review Commission on March 9 rejected a developer’s proposal to erect a 72-foot-tall apartment building next to the 58-foot-tall Hays Street Bridge.

(click here to watch video of the entire meeting or click on any quote below to jump straight to that spot in the video.)

The five-story edifice would have blocked the view of and from one of the most recognized landmarks in San Antonio. The Hays Street Bridge is listed on the National Register of Historic Places and designated a Texas Historic Civil Engineering Landmark.

The 141-unit apartment complex was to be built on land donated by the Dawson family a decade ago for a public park for the enjoyment of visitors to the beloved pedestrian bridge.

After hearing 21 speakers condemn the project for more nearly three hours, the commissioners voted 5-3 to deny the request for Certificate of Appropriateness by Mitch Meyer, head of Loopy Ltd.

Those voting to reject the proposal were Anne-Marie Grube of District 7, who made the motion, Joel Garcia of District 9, who seconded her motion, Daniel Lazarine of District 2, Dr. Aza Kamal of District 8, and Chair Michael Guarino. Those who opposed Grube’s motion were Curtis Fish of District 1, Vice Chair John Bustamante of District 5, and John Laffoon of District 10.

The developer may appeal the decision to the Zoning Board of Adjustment and the City Council.

Monica Savino, Chair of the Dignowity Hill Neighborhood Association’s Architectural Review Committee, said the project’s height and mass were inappropriate and disrespectful of the modest homes across Cherry Street in the Dignowity Hill Historic District. 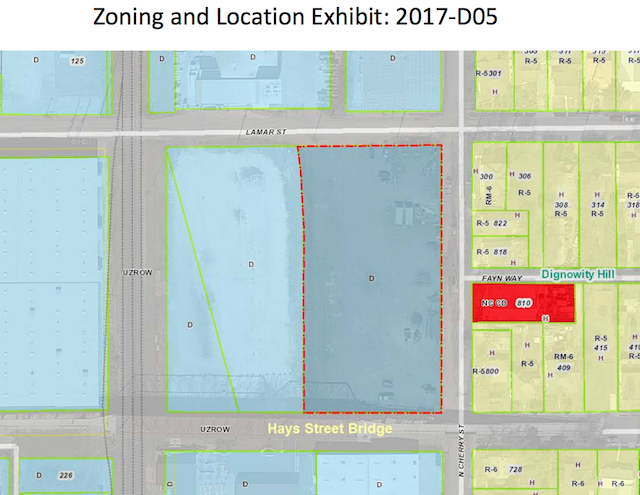 “The massing and street wall on Cherry Street is simply too tall,” Savino told the Commission. (Watch video of her comments here.)

Meyer’s original plan, rejected by the Commission in December, was four stories and 58 feet tall. The revised plan was for a five-story, 72-foot tall edifice.

“The Dignowity Hill Architectural Review Committee and our Dignowity Hill neighbors are very, very supportive of redevelopment in our neighborhood,” Savino said. “But we also know we want redevelopment that is respectful and responsive to the adjacent Historic District and the Hays Street Bridge.”

Patti Zaiontz read a statement from the San Antonio Conservation Society, which in 2002 invested $50,000 for the restoration and rehabilitation of the Hays Street Bridge (watch video of her comments here):

“This Bridge that serves as an icon of the near-East Side community, is a public space that must be accessible to all.
The Society has previously advocated for the preservation of sight lines, to and from the bridge.
The current development proposal has a modest setback from the bridge. But we would urge the creation of a larger space that would help preserve the views of the bridge.
We also suggest that the vacant land adjacent to the bridge be either donated as a park or preserved through a conservation easement to ensure that the bridge remains unencumbered.
~ Conservation Society President Susan Beavin

The Commission meeting and decision came two days after the funeral of Steadman, a respected engineer who spent 50 years fighting to preserve the bridge, and who co-founded the Hays Street Bridge Restoration Group. (Read his obituary.) 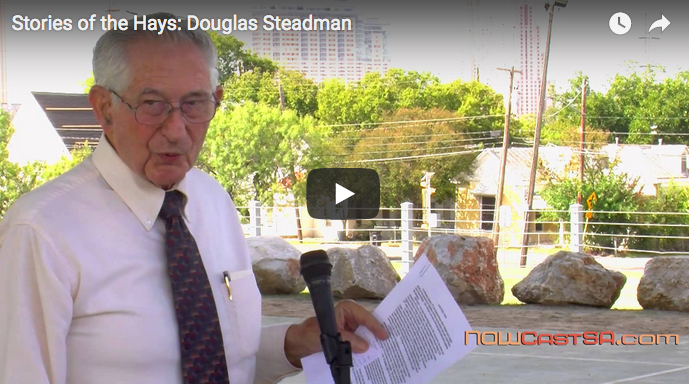 Steadman was honored by the Conservation Society as a Texas Preservation Hero in 2002 for his work on the bridge. (Steadman talks about the bridge and its history in this 2013 video.)

Steadman’s son, Darryl, was among those testifying against the development. (Watch video of his comments here.)

“I'm here because my father can't be here. Two days ago I buried him,” he said.

“On his deathbed, Sunday night before he died, he gave me this comment: ‘I should have never allowed the city of San Antonio to hold the land for me while I went to build the park and raise funds for it, because those crooks have stolen the land that belongs to the public.’ ”

In 2007, after meetings with the Restoration Group, the Dawson family donated 1.7 acres of land at 803 North Cherry Street for a public park next to the bridge.

“Doug and Marcie Ince (with the Conservation Society) and myself sat in the Dawson family offices… and asked them to donate the land to the city, so that when we got the federal money to restore the bridge, we would have a park next to it in order to facilitate the hikers and bikers," said Restoration Group member Nettie Hinton. 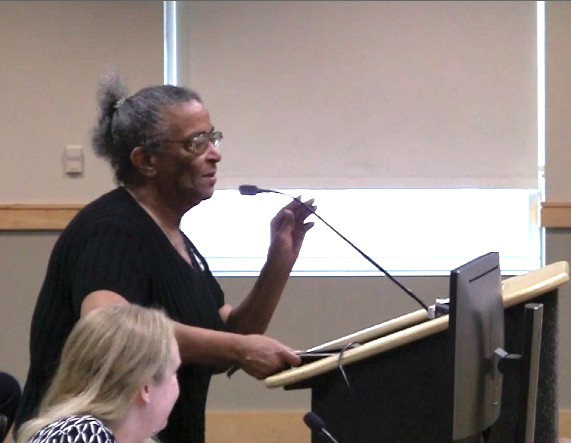 "It was going to be part of Howard Peak hike and bike trail, that connects the Museum Reach up the River, through Dignowity Hill over to the Salado Creek Greenway,” she told the Commissioners.

The Dawsons owned and operated BudCo. Ltd.,the San Antonio Anheuser-Busch and Grupo Modelo distributor, which was located next to the railroad tracks spanned by the Hays Street Bridge. The family moved operations out of downtown and sold the business in 2007.

Nettie Hinton speaks to the HDRC

“The Dawsons, they said, ‘The only thing we want you to do, is name the bridge after our family,’ “ Hinton recalled. (Watch video of her comments here.)

And they won, according to the judge and jury.

On July 11, 2014, a jury found that the City of San Antonio breached its contract with the Hays Street Bridge Restoration Group when it gave the land to Simor. Bexar County District Court Judge David Canales ordered the city to abide by its 2002 Memorandum of Understanding with the Restoration Group and return the land for the park.

Instead, the city appealed, and on March 1, 2017, the Fourth Court of Appeals reversed the decision - but not on the merits. The Appeals Court upheld the city’s claim that because the Restoration Group did not ask for monetary damages, instead demanding “specific performance,” (reclaiming the land and creating a park), the city was protected by sovereign immunity.

While the Restoration Group's attorney, Amy Kastely, is appealing that decision to the Texas Supreme Court (read her petition here), Meyer and Simor are moving ahead to co-develop the land.

Because the property is located inside the Downtown Historic District, development must be approved by the Historic and Design Review Commission, whose role is described in the city’s code here.

Only the San Antonio Missions, including the Alamo, have explicit “viewshed protection” limiting nearby development that would encumber the view. Because of the outcry in this case, however, the Office of Historic Preservation is seeking public input to add future specific protection for other scenic views and landmarks, including the Hays Street Bridge. (for more on viewsheds, see this article and video.)

In his opening remarks to the HDRC, James McKnight, the land use attorney for property owner Mitch Meyer, deflected the criticism. (Watch video of his comments.) 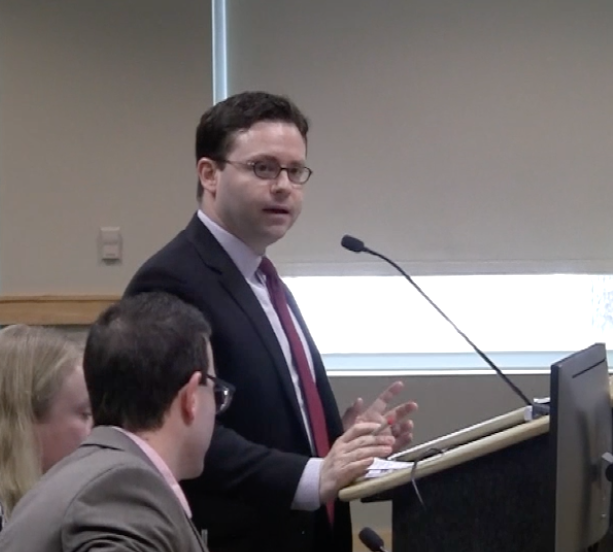 "I am sure you're going to hear from some folks about a lawsuit, viewshed protection, affordable housing, land swap, land sale, some public and private park issues. Please remember those are not design issues," McKnight said.

"We are not unsympathetic to the residents' concerns and care for their community. But this is not the forum, and this is not the body to address those issues. That's for City Council," he said.

James McKnight speaks to the HDRC

The guidelines for the Historic and Design Review Commission do not include terms such as “viewshed,” but they say new buildings should show respect:

“Special consideration should be given to maintain existing urban design characteristics, such as setbacks, building heights, streetscapes, pedestrian movement, and traffic flow. Building placement should enhance or create focal points and views. Continuity of scale and orientation shall be emphasized… Buildings shall be in scale with their adjoining surroundings and shall be in harmonious conformance to the identifying quality and characteristics of the neighborhood.”

In the first HDRC hearing on the development on Dec. 6, 2017, more than four dozen people including Steadman, then 90, signed up and waited hours to he heard. It was after 10 p.m. on a cold, rainy Wednesday, when the Historic and Design Review Commission voted to reject Meyer’s proposal to build a four-story apartment building. (Read more about that meeting and watch the video here.)

The revised plan for the “Bridge” apartment building was unveiled on Feb. 5, by Meyer’s new architect, Xavier Gonzalez, of GRG Architecture, at a town hall meeting at St. Philip’s College. The gathering was arranged by William “Cruz” Shaw, Councilman for District 2, which includes the Hays Street Bridge and Dignowity Hill.

When Restoration Group members finally elicited from Gonzalez that the four-story building had grown taller by another story and 14 feet, they were outraged. (Watch video of the architect’s presentation and the residents’ response at the town hall here.)

For many residents, losing the public view of the iconic bridge to an imposing building with unaffordable apartments would tear apart the very fabric and the heart of the East Side community.

“I'm here to speak on behalf of my grandchildren, my daughter, all the residents I know in those neighborhoods,” Antonio Diaz told the commission at the March 9 meeting. (Watch video of his comments here.)

“I have not spoken on the Hays Street Bridge issue because I saw it all as gentrification… As prices continue to go up, neighborhoods get dismantled, residents get displaced. 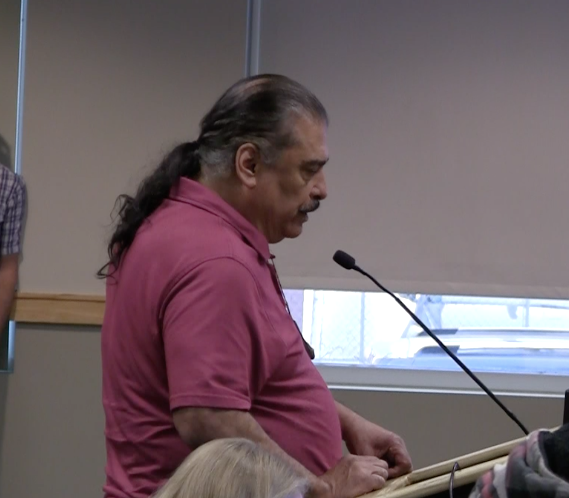 That's gentrification to me,” he said.

“I am in favor off the integrity of the existing neighborhoods surrounding the Hays Street Bridge, though I am opposed and against the development. I support the greenspace, the park. The land should stay for what Mr. Steadman fought for, for a park," he told the commissioners

"Hopefully you will side with the people's interest. Please hold this developer to a higher standard.”

Antonio Diaz speaks to the HDRC 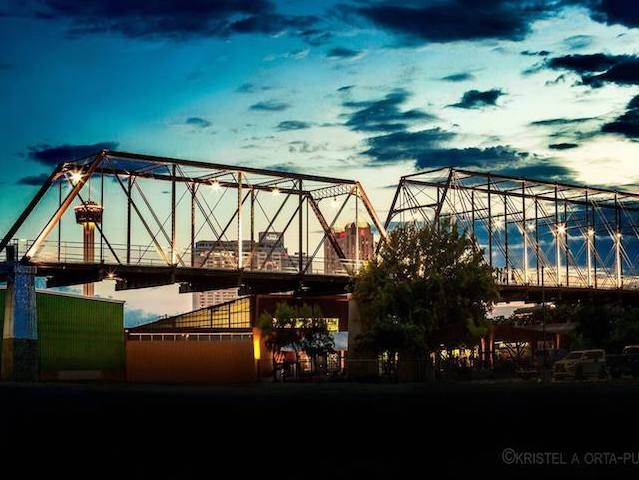