The Alameda Theater, which opened in 1949 at 318 W. Houston Street, has been shuttered for nearly 30 years. Despite water stains on the ceiling and eastern walls, despite the removal of nearly 2,500 seats, the theater retains its grandiosity.

One of the last films featured at the Alameda Theater was La Bamba, a 1987 movie about Mexican-American pop star Ritchie Valens. Therefore, it was only fitting a film projected at the Alameda last month was Selena, the 1997 blockbuster biography of the famed Tejano singer.

In partnership with several local sponsors, City Councilman Roberto Treviño and District One are hosting “Volver a la Alameda,” a series of special screenings of free movies.

View a photo gallery of the Alameda Theater rennovations below. 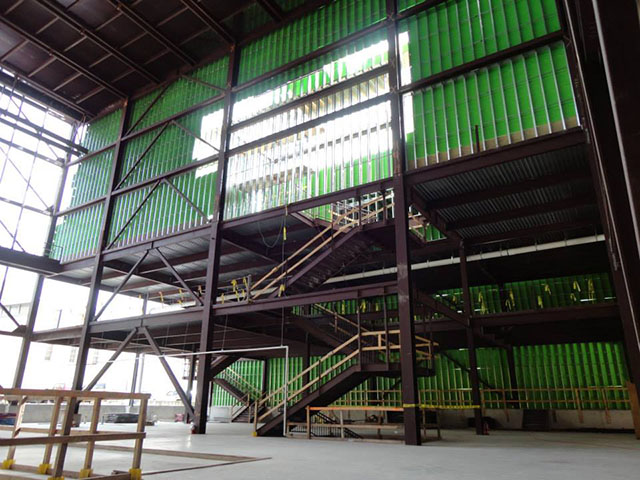 Alex Rodriguez serenaded the audience between movies. He said his father won a singing contest on the stage of the Alameda when he was a child.

“So I am honored to be carrying on that tradition,” Rodriguez said.

Councilman Treviño explained the formula for selecting the films for the series.

“(We want a) 1. Movie made by a local, 2. Mexican movie from the golden era of the Alameda, 3. Popular movie with Latino ties,” he said. “And we want to have music, poetry, and stories in between.”

The next movies (not yet selected) are tentatively scheduled for Feb. 25. Trevino said there will be free parking in adjoining City lots and food trucks will be on site to sell refreshments.

“The event will be similar to movies in the park, where folks will bring pillows, blankets, and chairs to set up on the floor of the main theater in the Alameda,” he said. The name of the theater goes back to the name of a nearby street in Spanish colonial days. In one definition, Alameda means Centro Comercial, a pretty direct translation for Commerce Street. In other definitions, it means Grove or Walkway. Alamo means Poplar or Cottonwood, and a line of trees bordered Commerce Street all the way to the Alamo.

The original Mission San Antonio likely stood at the site of the Christopher Columbus Italian Society, just a few blocks north along the San Pedro Creek. Some say the second location was at the site of St. Joseph’s Church (Saint Joske’s); others say it was in La Villita. A Marmac Guide to San Antonio may place the second location of the Mission in close proximity to the theater.

According to page 246, “Near here, where a ditch crossed Alameda (aka, Commerce Street), was the second location of the Alamo mission from 1719 to 1724, when, because of hurricane destruction, it was relocated to its current place.”

If the ditch mentioned in the Marmac Guide was the San Pedro Creek, then the Alameda Theater was at or near the old Mission. In later years, old-timers remember the San Antonio Gas Company formerly stood at the location of the theater.

The glory of the Alameda Theater begins almost 70 years ago at the peak of the Golden Age of Mexican Cinema. The Época de Oro del Cine Mexicano, roughly between 1935 and 1960, was when the Mexican film industry gained international recognition for their quantity and quality of production and their economic success. Mexico City became the movie capital of Latin America and the Alameda Theater reaped its success.

View another photo gallery of the Alameda Theater below. 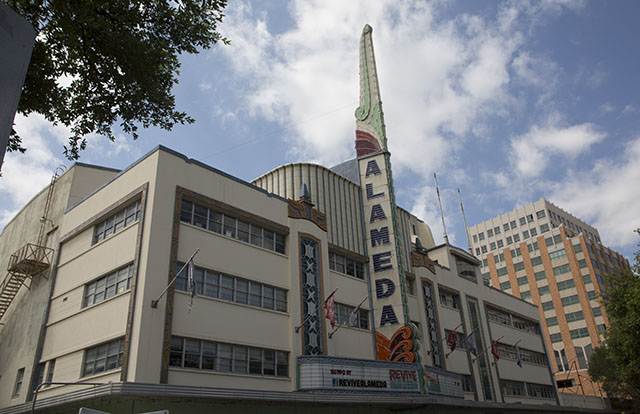 The Alameda was financed by philanthropist G.A. Lecchese and designed by local architect N. Straus Nayfach (who built many homes in the Monticello Park neighborhood) specifically for Spanish language films and live performances. Costing $1.6 million, it was one of the last grand movie palaces in the U.S.  Patrons would enjoy the water fountain in the lobby, fed by a spring beneath the building.

The murals in the Alameda Theater, painted by Pedro Teran with florescent colors, depicted scenes of San Antonio’s Mexican heritage. They glowed with a three-dimensional effect under the ultraviolet lights. Spanish ships sail into Mexico on one wall while a vaquero herds cattle beneath a star on the other wall.

The grand opening in 1949 included the film Revancha (featuring Cuban actress and dancer, Ninon Sevilla) and a surprise appearance of Gene Autry who sang a popular ballad in Spanish.

Countless other films and performances followed. Movie star Pedro Infante, comedian Cantinflas, actress Maria Felix, and singer Vicente Fernandez are just a handful of the stars who appeared at the Alameda.

This gran teatro was cut up into a tri-plex as television began taking bigger bites into the movie industry. As video stores and multi-screen theaters in suburbia began to proliferate in the 1980s, the Alameda Theater finally gave up the ghost. The City purchased it in 1994.

A half-dozen plans to renovate the Alameda Theater have been proposed – and then disposed – throughout the last 30 years. Around the turn of the century, there were plans to renovate it to house performing arts mediums such as television studios, Broadway productions, theater, opera, dance, concerts and film. Sponsors, such as the Smithsonian Institution and Ford Motor Company, have come and gone.

Texas Public Radio is currently working with the City of San Antonio and Bexar County to move their headquarters from Datapoint Drive to a space behind the Alameda Theater.

In addition to the theater, the Casa de Mexico International Building once held offices for the Mexican Consulate and the first Mexican-American Chamber of Commerce. Today, the Henry Ford Academy: Alameda School for Art + Design is a tenant in Casa de Mexico. The Academy is the city's only tuition-free high school that focuses on art and design.

Current plans for the Alameda Theater include a connection to the San Pedro Creek Improvements Project. An amphitheater is planned (see image, here) to be completed by 2018, the Tercentennial of San Antonio.

Bridget Hinze, an executive offices administrator for the San Antonio River Authority, shared a rendering that shows the plan for that section of the San Pedro Creek.

“As you can see (in the drawing here), the amphitheater will still be adjacent to the Alameda Theater,” Hinze wrote in a recent email to NowCastSA.

Visitors to the Amameda Theater in February should be aware of the San Pedro Creek project construction on Houston Street. Pedestrians will be able to pass but the street is blocked to vehicles.

Slab Cinema reminds movie-goers, “There is no theater seating, please bring your own chairs.”

Editor's note: This article has been updated throughout.

**Cover Image: The sign for the Alameda Theater has remained a historical marker within the city for decades. Photo by B. Kay Richter. 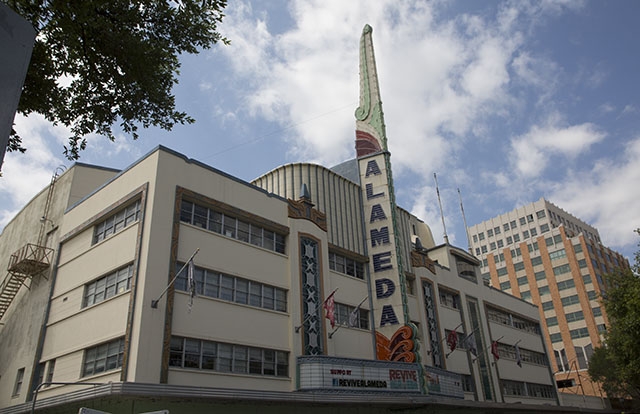