Surrounded by figures clad in period costumes, including a Davy Crockett look-alike, Texas and San Antonio officials gathered in front of the Alamo on Thursday to formalize a long-awaited agreement to preserve the historic mission and spruce up its appeal to visitors.

Representatives from the Texas General Land Office, the city of San Antonio and the Alamo Endowment Board put pen to paper, signing an agreement to develop a master plan for the Alamo Historic District and Complex. Although similar past efforts have failed, state officials are optimistic that this time the plan will stick.

“Coming together with the city is the best start we could possibly hope for,” said Alamo Director Becky Dinnin, who works out of the land office. “This is what gets us started to begin outlining the true scope of what we want to accomplish.”

The agreement has been in the works since early spring, following a push by then-newly elected Land Commissioner George P. Bush to promote the Alamo's development and fundraising efforts. After taking office, Bush formally established the Alamo Endowment Board and altered the management of the Alamo – cutting ties with the Daughters of the Republic of Texas (DRT), who have long overseen operations of the site.

In July, the United Nations Educational, Scientific and Cultural Organization (UNESCO), gave the San Antonio missions, including the Alamo complex, a World Heritage designation, placing the monuments on par with international landmarks like the Statue of Liberty and the Acropolis in Athens, Greece.

“It was truly a great victory for all of us — for the city, the state of Texas and the United States, as we’re now one of only 23 designated sites in the U.S.,” said San Antonio Mayor Ivy Taylor at Thursday’s signing. “That was a great day, but this is also a great day. This partnership opens the door to creating the very best design and plan, and it means we will have the ability to build what we envision.”

Notions of drafting a master plan to revamp the Alamo are not new, as Dinnin said the presentation of the Alamo and the surrounding area have long underwhelmed visitors. Previous efforts to revamp the monument and prevent growing downtown San Antonio from completely swallowing it failed to take hold or stalled due to a lack of funding.

Dinnin said she is optimistic this plan won't run into similar roadblocks. While discussions about forming an agreement were in the words before the UNESCO designation, Dinnin said it demonstrated the need for serious work to be done at the historic missions.

“It’s really obvious physically when you’re here,” she said. “The city has grown up around the Alamo, and it’s hard to find ... you have to look at little bit harder than we should have to look. It’s right in the middle of the heart of downtown San Antonio and, in one way, that means it has served its purpose — it was put here to establish a city. But at the same time, it’s hard to find and a lot of the pieces, and the important history is lost unless you already know what happened here.”

Gene Powell, who serves on the Alamo Endowment Board alongside prominent philanthropists including Red McCombs and Ramona Bass, said he hopes to see the Alamo gain the same notoriety as places like Gettysburg, Pennsylvania, or Jamestown, Virginia. Most visitors now, he said, only spend an average of eight minutes at the mission.

"There's just not that much left of it," he said.

Hotels, shops and roadways have crept closer over the years, encroaching onto land once part of the original mission property. Last week, the land office announced plans to buy three buildings neighboring the Alamo, but Dinnin said the buildings' fate will be determined by the master plan.

"There is a lot of opportunity, and we’re just getting up to the starting line," Dinnin said. "There’s been a lot going on in San Antonio, and master plans have come and gone. Right now, it just seems that the efforts of everybody collaborating and working together are making this finally happen."

A developer by trade, Powell said he has lofty goals for the Alamo District but is focusing first on assembling a “dream team” to work on drafting plans and securing appropriate funding. During the session, the Legislature approved $31.5 million for development of the master plan — funding secured in large part by Sen. José Menéndez, D-San Antonio.

“Everybody has been underwhelmed by what the Alamo experience currently is,” Menéndez said. “No one gets the feeling of the magnitude of what actually occurred there, or the length of time the mission itself played a role in the founding of Texas. For the first time, the state of Texas is taking a role that’s more than just a caretaker that they hadn’t really taken in the past.”

The city of San Antonio will also contribute $17 million to the plan, but the bulk of the funding will come from the endowment. While a lack of funding stalled similar projects in the past, Powell said he is confident the board will be able to pull together significant contributions from private donors to supplement the state and city’s contributions.

While no official timeline for the project has been established, Powell said he thinks they will have a completed plan by next year.

Disclosure: Red McCombs was a major donor to The Texas Tribune in 2011. A complete list of Tribune donors and sponsors can be viewed here.

This article originally appeared in The Texas Tribune at http://www.texastribune.org/2015/10/15/alamo-historic-district-prepares-change/. 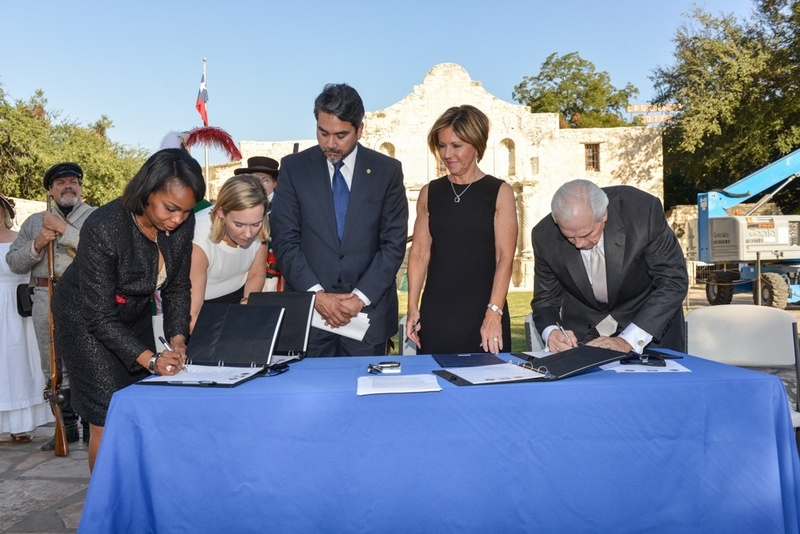