Analysis: Alamo plan long on Orwellian Newspeak, short on respect for the public

For a document obsessed with events of 1836, the new “Alamo Comprehensive Interpretive Plan,” reads more like “Nineteen Eighty-Four,” a dystopian novel that satirizes hypocrisy by the state.

To be fair, this Interpretive Plan, revealed in a public presentation on June 7, 2018, mitigates some of the worst features of the Alamo Master Plan developed last year by a different consultant team. (My take on the 2017 plan ) (Video of the 2018 presentation)

The new plan would bring more shade trees into the footprint of the original Alamo mission compound, though a large shadeless space would remain in the center.

The high structural glass walls that were proposed last year to define the perimeter of the original compound have been eliminated in favor of discreet railings, and gates would provide more potential points of access than were previously envisioned – but the Interpretive Plan leaves unclear the extent to which those gates will be open.

A small but welcome improvement in the new plan is the proposal for a traffic-calming device generally known as a speed table covering the entire intersection of Commerce Street and South Alamo – the street surface would be raised a few inches to ease pedestrian movement while also encouraging drivers to slow down.

But the Interpretive Plan carries forward some of the most troubling aspects of the earlier plan, and adds new outrages.

The Master Plan envisioned closing Alamo Plaza and Crockett Street to vehicular traffic. The Interpretive Plan sees and raises: It would also close Houston Street to vehicles in the three blocks east of Broadway. Worse, during hours when the proposed museum is open, Houston Street would be closed even to pedestrian traffic on the block in front of the post office, greatly complicating life for guests of nearby hotels, among others.

The previous plan would have retained only the facades of three historic commercial buildings on the west side of the plaza – the Alfred Giles-designed Crockett Block, the Palace Theater building and the former Woolworth store – and built a new museum structure behind them. The new plan offers a range of options for those buildings but shows a clear preference for reducing the Crockett Block to its facade – thus eliminating the irreplaceable massive stone interior structure – and replacing the other two with new construction.

But the new plan also would demolish the former H.L. Green store and its immediate neighbor, significantly eroding the building line, partially erasing Alamo Plaza’s history as a retail center, and losing the intimate scale of Crockett Street between Losoya and the plaza. There’s little to be gained in compensation. The ostensible reason for the demolition is to make room for an expansive pedestrian approach to the plaza from Losoya Street. But the proposed closure of Crockett to vehicles would provide ample space for that purpose.

Historical cluelessness with a sprinkle of Disney

Moreover, those buildings lie entirely outside the boundary of the original Alamo compound. Their elimination would not in any way advance the interpretation of the Alamo story. Indeed, it would do the opposite: An important part of the Alamo’s legacy is the late-19th century development of a vibrant commercial and cultural spine on the ruins of the western wall.  It is only by dint of historical cluelessness that the Interpretive Plan dismisses all the buildings on the western edge of the mission compound as “non-contributing.”

The previous plan proposed closing Alamo Plaza to all vehicular traffic – currently, one southbound bus lane and two northbound general traffic lanes – but didn’t address what to do with the displaced vehicles.

The new plan would partially compensate for the loss of northbound capacity by adding one northbound lane to Losoya Street’s existing two southbound. But that lane can’t be added without either eliminating all the loading zones that serve Losoya Street’s many businesses or unacceptably narrowing the sidewalks and eliminating trees. (An entirely reasonable course would be to eliminate the Alamo Plaza’s southbound bus lane, making considerably more pedestrian space available without losing northbound capacity and an important part of the plaza’s traditional function.)

The previous Master Plan, for all its faults, at least avoided Disneyesque fakery. The new Interpretive Plan, showing no such scruples, proposes a reconstruction of a long-vanished cannon platform at the southwest corner.

Taking the public out of the plaza

The Interpretive Plan carries forward the worst aspect of the Master Plan: The Texas General Land Office would take ownership and control of Alamo Street and its adjacent sidewalks and open space within the footprint of the original Alamo compound. (The new plan actually shows GLO control extending about 100 feet beyond the compound’s original south wall, essentially all the way to Crockett Street.) 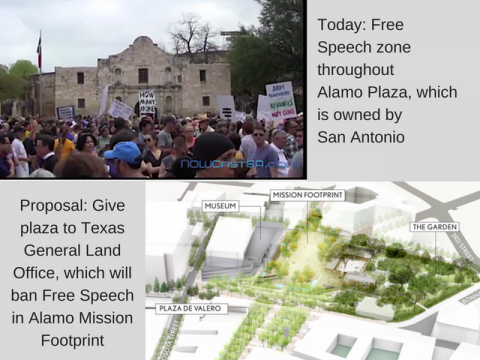 That space, now owned by the city, has traditionally served as San Antonio’s most prominent and most important public forum, where citizens’ right to  expression and protest is protected by the First Amendment.

If City Council allows the property transfer to take place, that portion of Alamo Plaza would cease to be a public forum.

The General Land Office has made it clear that the First Amendment will not apply within the property it controls.

The Interpretive Plan notes that the open space south of Crockett Street – in front of the Menger Hotel and Rivercenter – would remain subject to First Amendment protections, but the amount of contiguous space practically available for public assembly will be determined in the design phase, yet to come. The renderings in the interpretive plan suggest that the usable space might be quite limited.

A historic site and a living urban space

All the major faults in this Interpretive Plan have their roots in the language of last year’s Master Plan.

That plan posed an important and entirely proper question: “Is the Alamo Plaza a historic site of extraordinary significance or is it an urban space?” The plan’s answer to that question was to consider the plaza almost exclusively as a historic site, and only tangentially (and, it appears, grudgingly) as an urban space: “Most people agree that restoring the dignity and reverence of the site and recapturing the footprint of the historic mission are primary goals that the Master Plan must accomplish.”

The correct answer would have recognized that Alamo Plaza is both a historic site and an urban space, and that those two aspects cannot be disentangled. To alter the urban character and urban function of the plaza as extensively as the Interpretive Plan proposes is to reject the “continuum of history” the plan purports to embrace. Treating the plaza as equally both urban space and historic site would have produced a much more modest intervention, and one that is more respectful of the Alamo’s actual history and legacy.

Myth over a matter of facts

But the Texas General Land Office, the agency that will be in charge of implementing the plan, is less interested in the actual history of the Alamo than in the Hollywood myth.

In a brief summary of the Interpretive Plan on the GLO’s web site, the word “reverence” or “reverent” appears six times. Reverence for what? For “the ground where heroes died to make Texas free” – a spectacular example of Orwellian doublethink.

The proximate cause of the American immigrants’ rebellion against the Mexican government was the latter’s decision to enforce a prohibition against slavery. The prevailing intention of the rebels was to have Texas annexed by the United States as a slave state – as the Missouri Compromise required.

So it would be more accurate to describe the Alamo as the ground where criminal immigrants died to make Texas free for white people to own black slaves and dispossess the indigenous population.

As Orwell put it in Nineteen Eighty-Four: “Freedom is Slavery.”

The Interpretive Plan itself, like the Master Plan before it, is fatally infected by a blindered fixation on the 1836 battle and the aim of enforcing a misguided “reverence” at the site of the battle. The street closures, the transfer of city property to the state, the restrictions on pedestrian movement and free speech, the demolition of historic urban fabric – all stem from that fixation.

None of those interventions would be required by the legitimate, modest goals of clarifying the experience of the site, conserving its historic resources and interpreting its history in an intellectually defensible way.

A return to the drawing board would be an excellent next step. 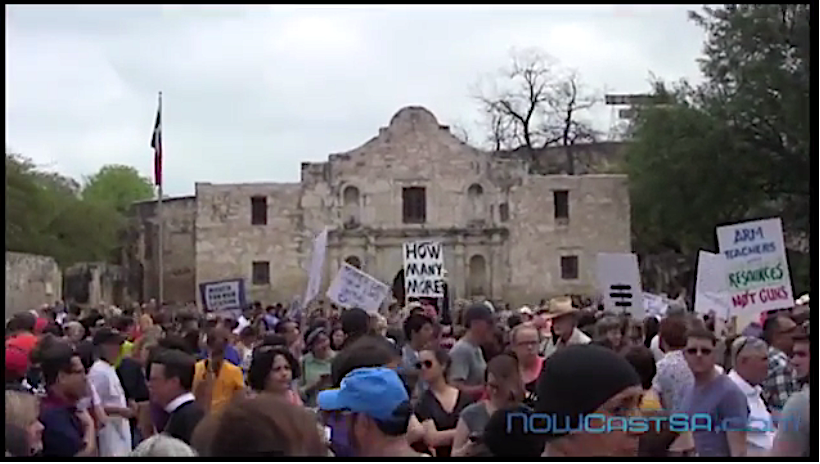