In the face of citywide opposition led by a well-organized East Side coalition, the developer of a four-story apartment building adjacent to San Antonio's iconic Hays Street Bridge had his request for a Certificate of Appropriateness rejected by the Historic and Design Review Commission on Dec. 6, 2017.

This is what revenge looks like for a majority of involved Dignowity Hill residents who believe they were wronged, and they were.

Mitch Meyer, the head of Loopy Ltd., wanted to negotiate terms that evening with the HDRC as if the sordid history underlying his development deal could be treated as a bygone affair, a closed chapter. But for three hours, dozens of affected citizens gave on-point and passionate arguments in opposition to a project they see as a gross injustice, a brazen exploitation of stolen land. (Replay video of the first hour of their comments here and the second hour of their comments here.)

The commissioners, sensitive to the charged atmosphere and weary over a public meeting that dragged beyond seven hours, raised their own concerns.

The objections raised were many, but the key issues of concern to the commissioners boiled down to three:

Of the three issues, Meyer sensed that the parking garage design might be resolved on the spot. Meyer said he had proposed a “green” brick wall along Cherry that would be screened with vines and other landscaping because he had seen such walls in Mexico and thought they were beautiful. Recognizing that the neighbors considered it ugly, he offered instead to put a row of apartments facing Cherry Street.

The offer was too little, too late.

Commissioner Joel Garcia, whose motion to deny the project prevailed, argued the design only barely met the spirit of the guidelines. He said the garage should be underground or repositioned as it was not truly, per development code guidelines, behind the apartments if it went up to the sidewalk at Cherry.

(Replay complete video of the developer's defense and the commission's rejection of the project here.)

Meyer’s land use planning attorney, James McKnight of Brown & Ortiz said that would add 25 percent to the cost and kill the project.

To hide a ground level parking garage, Loopy Ltd. proposed use of a brick wall facing Cherry Street that would be partially screened with plants. Image courtesy of Loopy Ltd., COSA public records.

Garcia also noted that Meyer’s claim of this being a mixed-use project was a joke, since the retail component facing the bridge was barely 1,000 square feet. Meyer admitted that the retail location would not make him a dime, but he inserted the retail to assure there would be a public activity, as requested by the neighbors. The suggested retail activity was an ice cream shop or similar business that invited foot traffic in a recreational setting.

A more serious threat to Meyer’s plans was the opinion of Commissioner Azza Kamal, who concluded that even though City Council was only now initiating a study on a viewshed ordinance, the HDRC had a right to consider the visibility of the bridge.

Meyer had argued it was the visibility of the city, particularly of the downtown skyline, from the pedestrian bridge platform that was pertinent. He would have preferred to invalidate concerns of neighbors and their claims that views of the bridge from street level merited consideration.

Commissioner John Bustamante threw another dagger into the project when he raised the issue of a narrow lot that exists between the Meyer project and the bridge. He noted the HDRC had no legal assurance that future development on the lot, which is labeled as a possible retail development, would not further obstruct access to the bridge at some future date.

Meyer argued that his project should not be judged based on what might happen with land that he did not own. Meyer obtained rights to develop on the lot from developer Eugene Simor.  Bustamante countered that it was Meyer that split the lot in two when he replatted the site, leaving the narrow section in Simor’s hands.

“You created the condition that makes this an issue. You severed it and at the same time you are trying to rely on it,” Bustamante said.

Some citizens speaking in opposition disputed the accuracy of Meyer’s schematics, claiming they fudged distances in ways that made the building seem less of an obstruction. McKnight offered a convincing rebuttal, defending the numbers, but Commissioner Daniel Lazarine expressed doubts.

Lazarine prefaced his comments by stating he really wanted to accept the project, but then added, “the drafting in general, for a project under this much scrutiny, should have been of much higher accuracy.”

The opposition forged a few awkward alliances. Former District 2 Councilman Keith Toney called the building design “hideous.” But in the preceding breath said he was not opposed to development and had supported Simor’s proposal to develop the Alamo Beer Company on the south side of the bridge.

That put him at bitter odds with his constituents once.

The Stab in the Back

Since its restoration and reopening in 2010, the Hays Street Bridge has become one of the most recognized landmarks in the city, rivaling the Alamo shrine and the Tower of the Americas as one of the most photographed locations. It is a popular foot and bicycle bridge that also attracts tourists who enjoy the views it provides of downtown and surrounding neighborhoods.

The bridge was constructed in 1881, but was put into service in other locations in the 19th century before being installed in San Antonio to provide access from the East Side to downtown over a railroad. It closed to vehicular traffic in 1982 and to pedestrian traffic in 1994. For its design and service, the bridge has been recognized by the National Register of Historic Places, the Texas Historical Commission and has been designated a Texas Historic Civil Engineering Landmark.

In the late 1990s, a grassroots effort began to save the bridge and the Hays Street Bridge Restoration Group was formed. The Group identified federal grant money and worked with the city on an application that led to a $2.89 million award in 2002.

The award was conditioned on the city providing a $718,114 match in cash and/or in-kind contributions. The city insisted on a written contract for “fundraising services” between the Group and the city, memorialized in a Memorandum Agreement. It was the Group’s responsibility to raise the matching funds.

The group raised $200,000 in cash and secured $400,000 through in-kind contributions such as volunteered professional engineering services and the donation of the land, which belonged to the Dawson family.

It was always understood that the Dawson family was donating the land in the 800 block of North Cherry Street so that it would be reserved for the public's enjoyment in conjunction with the bridge.

The land gift to the city was announced at a large fundraising event hosted by the Hays St. Group in March 2005.

“Potential donors were shown preliminary plans for the land to be used for parking, restroom facilities, and educational information to enable and enhance public enjoyment of the historic Bridge,” according to the Hays St. Group’s Amended Appellee Brief to the Fourth Court of Appeals, drafted by attorney Amy Kastely.

The city accepted the gift in 2007. And once the bridge restoration was complete, the Hays St. Group continued its work to complete the construction of educational and recreational facilities, parking, and restrooms on the adjoining land, the appellate brief said.

“Unbeknownst to the Group, however, a new City administration had decided to transfer 803 N. Cherry to the Alamo Beer Company. Finally, in June 2011, city staff met with representatives of the Hays St. Group and informed them of this decision.”

The group objected, and when the transaction went through they responded by filing a civil lawsuit. In the trial court, a jury sided with the Group and found that the city had breached a contract, and the district court judge entered a judgement in the Group’s favor.

The city appealed on several grounds, but the issue that the Fourth Court of Appeals focused on in its Memorandum Opinion was the immunity of a government entity. On March 1, 2017, the city obtained a reversal.

The city claimed that because the Hays St. Group did not ask for money damages, instead demanding “specific performance,” (reclaim the land and create a park), the city was protected by law.

The Fourth Court then took the additional step of denying the Hays St. Group’s request that the case be sent back to the trial court so that they could amend their complaint to seek alternative damages. The case was appealed to the Texas Supreme Court but the high court has not made a decision as to whether it will be heard.

Opponents have raised the issue of pending litigation at every turn, such as when Meyer sought a tax abatement from the Bexar County Commissioners Court.

McKnight has argued the Fourth Court decision settled the case and the Supreme Court is unlikely to accept the case, and he may be right. For that matter, Meyer may push forward and try his luck with City Council. The HDRC would prefer he redesign the project to something more to the neighbors' liking, but it's clear the majority won't settle for anything other than the park they have long worked toward.

To reach this point, the city has made some very dubious claims that make for very bad optics. For instance, the city claimed there was never an understanding that the land was to be used for a park.

Never mind that the Dawson family never intended that the land they donated should go to Eugene Simor so that he could profit from its development.
The city also claimed that the Hays St. Group “did not suffer injury.”

“The City’s breach of the Memorandum Agreement has caused injury to the Plaintiff: (1) The City’s breach exposed the Group to public ridicule and potential liability because both City employees and Group members represented to potential donors that the donated land was to be available to enhance public use of the renovated Hays Street Bridge, (2) the breach had the effect of diverting the benefits of the Group’s unpaid work to a private developer, the Alamo Beer Company, over the strong objection of the Group itself, (3) the City’s breach has severely diminished the Group’s reputation and credibility within the community and among potential donors and supporters, injuring its future fundraising ability, and impairing its ability to fulfill the mission for which it was created.”

The city did not win in court because it was in the right. The city won because it was able to hide behind the shield of sovereign immunity when it betrayed a trust. And it was in that poisoned atmosphere that  Mitch Meyer tried to breath life into a new project.

He didn’t help himself any by replatting the site and leaving a land wedge in Simor’s hands.

A common complaint among opponents has been a trend toward gentrification in Dignowity Hill and other neighborhoods that border downtown. Meyer’s project, which he named The Bridge to brand it as proximate to the Hays Street Bridge, is seen as yet another domino that sends the poor tumbling away from once affordable communities.

Marlon Davis, a young man born and raised on the East Side, made note of annual reports that conclude the inequality gap between affluent and low income families in San Antonio is one of the worst among American cities.

“Why does Eugene Simor want to widen the gap?” Davis asked.

He then chained the landmark to the income gap.

“You’re not just developing this bridge. You’re burning one.” 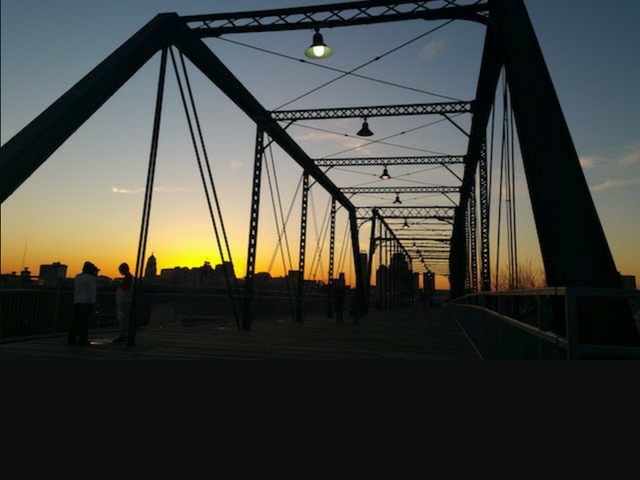