San Antonio is, without question, the most backward city of any of the major urban Texas municipalities when it comes to making public records available. Opacity seems to be the rule.

I know this because it’s my job to track real estate development across the entire state. The company I work for  provides leads to the construction industry on what kind of projects are coming.

General contractors, subcontractors, building material manufacturers and suppliers/distributors rely on construction information services such as ours to stay abreast of what is going on and plan accordingly.

For the past four years, I’ve been assigned to track development in Texas from Amarillo to Brownsville. Every city has its own system for maintaining public records related to real estate development, and as might be expected, many of the smaller markets have very rudimentary - some might say primitive - means of keeping records.

I’ve become very familiar with the record keeping methods of well over 100 Texas cities, and I can tell you that San Antonio is nowhere near the top.

If we were to start with the 12 largest cities by population, I would rank San Antonio 12th. If we counted 25 cities, San Antonio would probably drop to 20.

I’ve made an attempt at scoring the 10 largest Texas cities according to how records are made available on the Internet. I limited the scoring to two political bodies that exist in practically every city. All cities have a City Council (or City Commission), and all cities have some version of a Planning Commission, although some cities split its duties into two or three boards.

Of these two political bodies, I checked on whether a backgrounder packet is included in advance with the agenda, where video is posted, and how well minutes are reported.

The background packet, ideally, provides a history and crucial identifying data that helps residents understand the scope of a project, who is behind the project, and what public and city administrative staff input has gone into the review process. Most cities provide some version of a backgrounder packet for City Council sessions.

However, by the time a matter reaches the City Council, developers normally have gotten all their ducks in a row and the council decision is usually a pro forma procedure.

In our business, the sooner one can get information on a project, the more likely it is that our clients will be able to bid or contract on some aspect of the job. Therefore, our preference is to catch these projects when they appear before a planning or zoning commission, or an architectural review board.

The more informative a planning commission packet is, the better. Video (preferably live and very recently posted after the meeting) is invaluable, because it is a means to get better acquainted with the owner/architect team. Video also gives viewers a sense of the public’s interest and the board members’ specific concerns.

Barring the availability of video, it helps to get timely access to the minutes, assuming the transcriber thoughtfully records the most essential elements of a case.

I did not weight Planning Commission records higher, although I should have. In that sense, I graded San Antonio and the rest on a curve.

On this list, Austin ranked first, and San Antonio ranked 10th out of 10, even behind Laredo, one-eighth its size. 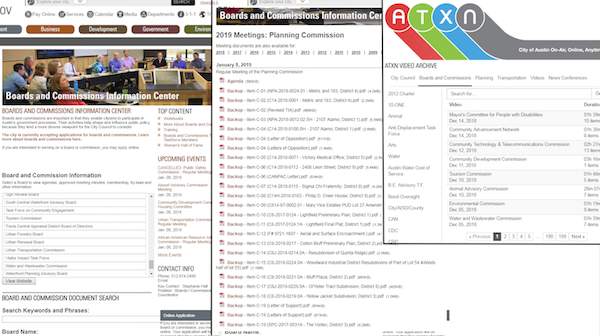 My criticism of San Antonio Planning Commission and Zoning Commission (there are two separate entities in this city) is that compared to most cities, the background information on land use amendment or zoning change requests is more sketchy. It’s harder to follow who the developer is and what they are planning.

San Antonio, incredibly, is also in the minority of cities that do no provide video of any kind for anything other than City Council. It is also difficult to find minutes online. Although the San Antonio Legistar system provides a column for linking to minutes, they’re never entered. You have to go another area where it lists City Council A Session and search Meeting Details to find the link.

I can get a full agenda packet for a TIZ Zone board in the City of Waco. The Dec. 20, 2018 packet was 106 pages and provided detailed information on three commercial projects. The only advance information on a San Antonio TIRZ board meeting is an outline of the meeting on a one-page or two-page agenda. And if I want the packet after the meeting, I would have to put in a special request in writing.

As a general rule, I’ve found that text files (whether PDF or Word, etc.) and video (live and post-meeting) are readily available in the major cities and the suburbs all along the I-35 corridor from Denton in Denton County all the way down to New Braunfels in Comal County.

San Antonio falls into a different, much more opaque group of cities that includes the Rio Grande Valley and the Permian Basin.

Fortunately, our company is based in San Antonio. This allows me to travel to the meetings that I have an interest in covering. But I find it a shame, given its size and the pride of its leaders in the city’s supposed modernity, that the ONE major city in Texas where I really have to leave the office to get work done is San Antonio.

I have brought this to the attention of city officials before. When I first came into this role and realized the technological disparity, I wrote a letter to my City Councilman. I never heard back.

A year later, I complained to the San Antonio Mayor’s office and to the office of media communications. I did hear back from a woman, whose name I don’t recall, and she was sympathetic. But her response was that San Antonio is a “poor” city and cannot afford the capabilities one finds in Austin or Houston.

I did not think that was an accurate assessment of the situation. It is easier to harvest data from small cities such as Frisco, or McKinney, or Garland, Texas. Anyone familiar with doing a data search for records in a municipality would see that San Antonio is not keeping up.

We should be embarrassed.

A note on Video: Video quality varies. I took points off in Dallas and El Paso because they usually (not always) use just two cameras, one for the dais and one for the podium. When documents such as plats, site plans and architectural elevations are presented on screen in the room, they can’t be seen online.