Slideshow and photo history map: San Antonio Then and Now

Come take a trip from past to the future in our San Antonio Then and Now photo essay and slideshow ...

For full descriptions of the photos, visit our Flickr photoset.

Photographs help us see a place that once was and compare it to what is now.

The technique of finding a picture in dusty archives of a library or a tattered scrap book and recreating the same shot, in the exact location, can be the key to unlocking a world that existed in your own backyard.

In San Antonio, history never lies too far away. The past sits right under the surface. The downtown streets are swamped with history, not a reference to the infamous floods of 1921; although photos will prove that the sunlight still glistens on Travis Street now as it once did across the watery pavement .

New photos capture commercial distributors speeding along once-quiet roads in their cargo trucks; sleek 2010 hybrids and self-parking vehicles replace the buggies and primitive motor cars once out in front of the Menger Hotel.

Drop down below street level to walk along the life-giving artery of the San Antonio River, and you will notice that things aren’t quite that different.

The same river flows through the city.

People still gather to share in the city’s collective ambiance. Distinctive architecture showcases the many styles that have adorned downtown through the decades.

The entire city is saturated with memoirs and Old West tales.

Walk down East Commerce Street on a Sunday to St. Joseph’s Catholic Church and you will run into German descendants whose families have been a part of the congregation for generations.

Stop just down the block at the old Dullnig Building, which in 1883 sold dry goods and sundries, for a McFlurry and some fries. Better yet, stare up at the same cypress trees that Mexican snipers once nested in to fire at Texian troops advancing along the river in 1835.

On the 300 block of Soledad you can park your car in the same parking space as one would’ve in 1915; sadly a photo will show that you won’t be attended to by a speedy crew at a full service gas station like before.

Stare across Lavaca Street from your porch at the foundation of your neighbor’s home, or at the crumbling structure next to it; it once was home to a Mexican shoemaker, or a settler and his family.

From simple snapshots to portraits, photographs forever capture the moments along the way, preserving the past and documenting our constantly changing world.

Inspired by what others are doing with Now and Then photos, we put some vintage images alongside photographs taken today from the same vantage point, then blended them to show how the present and the past are intertwined. The old photos are used with permission from the San Antonio Public Library Texana section and help from Texana/Genealogy Manager Frank Faulkner. The new photos were taken by Andrew Delgado, with a Canon PowerShot. He blended the old and new with Adobe Photoshop CS5.

San Antonio is brimming with old stories waiting to be unearthed and retold. In many ways, San Antonio now is San Antonio then.

You can do this too!

Check out more photos like ours in the group Looking into the Past on Flickr.
Or get started documenting your world with the help of History Pin!

View San Antonio Then & Now in a larger map 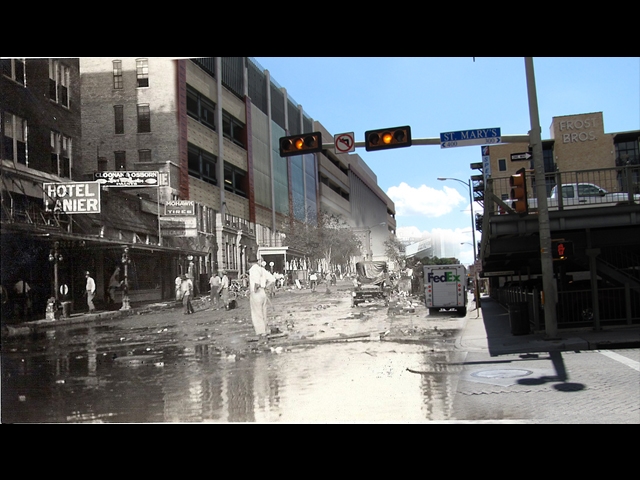