Films produced by teams of San Antonio filmmakers for the 48 Hour Film Project will be shown locally at 7 p.m. on Aug. 19 at the Cameo Theatre, 1123 East Commerce St.

This project has traveled from city to city all over the globe for the past nine years, pushing filmmakers to their limits by assigning a genre and required elements, such as a prop or line of dialogue, and setting them loose to produce a four-minute to seven-minute short film in just 48 hours.

Tickets for the screening at Cameo Theater are $10 per person. A "Best Of" screening will be held Sept. 3 at the Bijou Bistro Theatre. Winners from each city may receive up to $3,000, filmmaking equipment and a screening at the prestigious Cannes Film Festival. 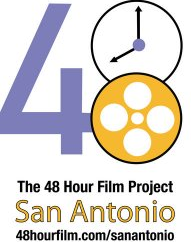