Within hours of their release from Karnes County Correctional Center, a privately-operated prison located about 60 miles south east of San Antonio, three refugee mothers volunteered to share their stories with NOWCastSA.

Since 2014, women and their children who fled violent and murderous gangs in Central America have been jailed by U.S. Immigration and Customs Enforcement, or ICE, in the 608-bed facility in Karnes City, Texas and a 2,500-bed facility in Dilley, Texas. ICE pays private companies more than $40 million a year to operate the facilities that were built to hold immigrants.

In the video, women from El Salvador, Honduras and Guatemala spoke about their months of imprisonment at Karnes with their children and hundreds of other families. In their statements, they confirm earlier reports of illnesses within the facility, as well as concerns of suicide among mothers. Mothers organized two hunger strikes that lasted from seven to 10 days, and describe how they were threatened with losing their children, or deportation and punished with solitary confinement for participating in the protest. The mothers describe how they were misled and mistreated.

Women and children have been held for as long as nine months without bond at Karnes and Dilley, and while some have been offered release on bonds as high as $20,000, most cannot afford to pay.

“After coming from a place where they had been lied to and had almost no one they could trust, they trusted us to tell their stories,” said NOWCastSA Managing Director Charlotte-Anne Lucas. “This is something we take very seriously. NOWCastSA exists to democratize information and promote an inclusive civic conversation, and it is clear these courageous women need our help to be heard.”

The San Antonio-based Interfaith Welcome Coalition, a network of faith communities, organizations and individuals working to help refugees, helped the mothers with their transition after being released and connected them with NOWCastSA to tell their stories.

Refugees seeking asylum were traditionally released to live with family or sponsors while waiting for a hearing on their case. But in 2014, the Department of Homeland Security announced that ICE would detain and deport people in order to deter others from coming to the U.S.

In May, ICE announced new standards for family detention and vowed to stop using detention as a deterrent for immigration. However, at least 97 national, regional and local organizations are calling for an end to family detention and assert that the practice violates the settlement agreement of the 1997 Reno v. Flores case.

After a rough cut of NOWCastSA’s video of interviews with refugee mothers was shown at a dinner hosted by the Interfaith Welcome Coalition at First Presbyterian Church in San Antonio last month, several national organizations contacted NOWCastSA asking for permission to share the video.

Thanks to generous donations from Interfaith Welcome Coalition, Paul Pfeifer and Holly Lucas, NOWCastSA was able to edit the footage into a mini-documentary.  The 10-minute video is free to share with credit on any website, and can be found at https://youtu.be/rxNEnyK7v0I. NOWCastSA plans to release four more videos to create a series of short documentaries over the next several weeks.

This story was produced and edited by NOWCastSA video journalist Clayton Price and narrated by NOWCastSA Managing Director Charlotte-Anne Lucas. Paola Retes generously provided the translation and voice-overs for the mothers in detention, while Rosalinda Maldonado, Jorge Montiel and Suzanne Montiel provided additional translations and support. The edited footage of two Texas detention facilities and Border Patrol was obtained from U.S. Immigration and Customs Enforcement (ICE). ICE does not allow journalists to film inside its facilities, citing privacy concerns.

NOWCastSA is a nonprofit organization that relies on public support to fulfill its mission. Those who wish to contribute towards NOWCastSA’s refugee coverage can make a tax-deductible gift at http://www.nowcastsa.com/donate. Corporate sponsorships are also available, and those interested can contact NOWCastSA at news@nowcastsa.com for more information. 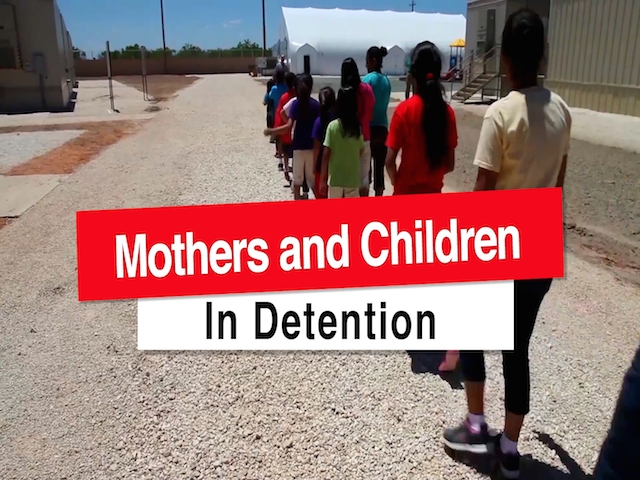