Faith-based groups, lawyers, community leaders and elected officials nationwide are imploring the federal government to release asylum-seeking mothers and their children who are being held in prison-like conditions in South Texas.

Since 2014, women and their children, who fled violent and murderous gangs in  El Salvador, Honduras  and Guatemala, have been jailed by Immigrations and Customs Enforcement, or ICE, in a  608-bed facility in Karnes City, Texas and a 2,500-bed facility in Dilley, Texas.

Lawyers say only a handful of women and children have been released, and that was after being forced to post bonds of as much as $20,000, despite a federal court judge's ruling against the government and a hunger strike that drew attention to the women's cause from human rights advocates and Congress, according to the New York Times.

Until the summer of 2014, people who came to the U.S. seeking asylum were routinely released on their own recognizance to friends and family while waiting for a determination.

After 66,000 asylum-seeking refugees came from Central America last year, the White House adopted a "no-release" policy of detaining people indefinitely to send a “deterrent” message back home to other would-be refugees.

"They are detaining women and children who have done nothing wrong, other than asking for our help," said Jonathan Ryan of RAICES Texas, a San Antonio-based a 501(c)(3) charity that provides free and low-cost legal services to under-served immigrant children, families and refugees.

The women and children are fleeing El Salvador, Guatemala and Honduras, countries that are experiencing unprecedented levels of violence from murderous gangs that the governments are unable to control.

The women fled because their lives were threatened, many were victims of assault, including sexual assault, and they have seen relatives and neighbors murdered or disappeared. They and their children face death threats for refusing to join the gangs.

Ryan equated the move with the government action during World War II that put thousands into internment camps. "It's not an American principle to prosecute refugees" he said. "People in San Antonio can help a woman and her child to get out of this prison." 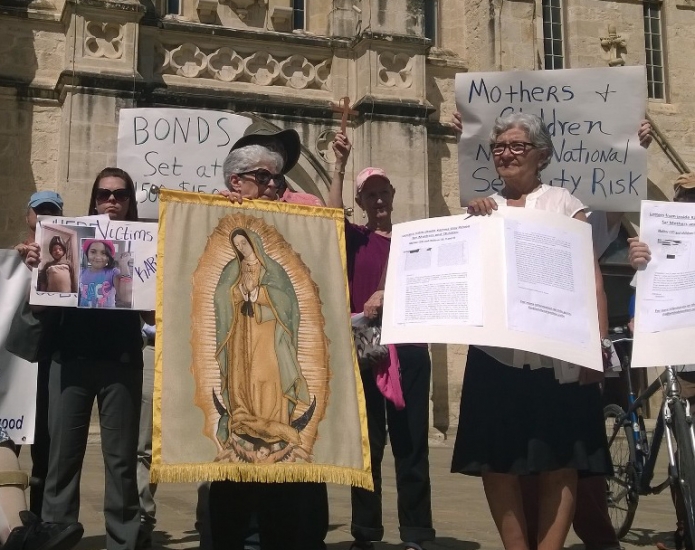