Despite Texas’ longstanding ban on same-sex marriages, two Austin women made history on Thursday morning when they became the first gay couple to legally wed in the state.

At a judge's direction, the Travis County clerk issued a marriage license to Sarah Goodfriend and Suzanne Bryant, who have been together for 30 years. But the order by state District Judge David Wahlberg of Travis County was temporarily blocked by the Texas Supreme Court Thursday afternoon. Attorneys for the state and for the couple disagreed on whether the marriage is valid.

Wahlberg's order — which did not clear the way for other same-sex couples to be married — directed Travis County Clerk Dana DeBeauvoir to “cease and desist relying on the unconstitutional Texas prohibitions against same-sex marriage.” The license was issued under special circumstances because one of the women has “severe and immediate health concerns,” a county spokeswoman said in a statement. Goodfriend was diagnosed with ovarian cancer last year.

Texas Attorney General Ken Paxton said the Supreme Court's action voided the couple's marriage license, "just as any license issued in violation of state law would be." But Chuck Herring, the couple's attorney, said it had no effect on their marriage.

"They’re already married," Herring said. "It's cold-hearted, mean-spirited and unseemly to try to do that to an ovarian cancer victim and her family."

The Supreme Court's action came after Paxton asked for the ruling to be blocked, saying Wahlberg's order was "erroneous." Paxton has also filed suit to keep the Travis County Clerk's office from issuing marriage licenses to other same-sex couples.

"The law of Texas has not changed, and will not change due to the whims of any individual judge or county clerk operating on their own capacity anywhere in Texas," Paxton said in a statement. "Activist judges don’t change Texas law and we will continue to aggressively defend the laws of our state and will ensure that any licenses issued contrary to law are invalid.”

Wahlberg’s order came on the heels of Tuesday's ruling by Travis County Probate Judge Guy Herman that said banning gay marriage is illegal. After Herman’s ruling prompted uncertainty among officials who were unsure what effect it has on gay marriage in the county, Paxton asked the Texas Supreme Court to intervene in the case and block Herman’s ruling.

Accompanied by their two daughters, Dawn and Ting, and their rabbi, Kerry Baker, the longtime couple said their vows at the county clerk's office.

"I want to finally be able to marry the love of my life," Goodfriend said in a statement. "In May, I was diagnosed with ovarian cancer and was rushed into emergency surgery. Having faced a life-threatening disease, I realized time is precious and that I wanted to spend it on the things that mattered most — my family."

"We want to open the door for all LGBT families to have the right to marry in Texas," Bryant said. "We were both born in Texas, came back to Texas after we met to build a family and establish our lives here. We plan to die here, and we have waited to get married because, as proud Texans, we want a Texas marriage license."

State attorneys have argued that the courts should respect a state's sovereignty and not overrule Texas voters, 76 percent of whom voted in 2005 to define marriage in the state's constitution as "solely the union of one man and one woman." On Thursday, Gov. Greg Abbott said he was "committed to ensuring that the Texas Constitution is upheld."

The constitutionality of the state’s gay marriage ban is also being considered at the federal level. After a January hearing, a three-judge panel of the U.S. 5th Circuit Court of Appeals is expected to rule on Texas’ gay marriage ban. The U.S. Supreme Court has also agreed to hear four gay marriage cases.

The statement from the Travis County clerk's office indicated the marriage license was issued to the “medically fragile couple” because they “may not get the chance to hear the outcome of this issue.”

Although the court order only applied to the one Austin couple, advocates for gay marriage were quick to celebrate on Thursday.

"This is a historic day for fairness and equality in Texas,” said Evan Wolfson, president of Freedom to Marry. “The family that Suzanne and Sarah have built together over more than three decades of commitment to each other mirrors the love between so many same-sex couples in Texas, all of whom deserve the freedom to marry.”

Goodfriend is a policy adviser to state Rep. Celia Israel, D-Austin, who said in a statement about the couple: "They love their family. They love our community. And I know they are thrilled to get married in the state they are proud to call home."

This article originally appeared in The Texas Tribune at http://www.texastribune.org/2015/02/19/travis-county-gay-couple-becomes-first-wed-texas/. 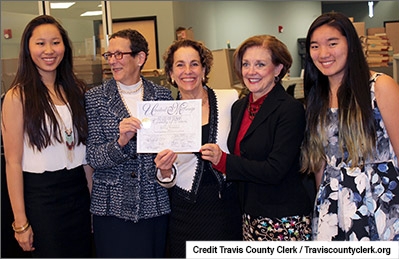