When they did, they uncovered a cache of previously unknown and uncataloged library items, including an early-edition King James Bible, dated 1615, and a Civil War-era photo album.

Judging by dates on magazines found in the old closet, staff at the San Antonio Public Library, which owns the building and is leasing it to the National Western Art Foundation, estimate that the area was walled off sometime around 1952 and then forgotten.

Why the books, photographs and other articles were left in the sealed room is unknown.

A partial list of items found in the closet:
The building most recently housed the Harry Hertzberg Collection and Circus Museum, which Mr. Hertzberg bequeathed to the San Antonio Public Library. It originally opened in 1930 as the San Antonio Public Library, replacing the original Carnegie Library, which had been damaged in the great 1921 flood. It became the Hertzberg Collection and Circus Museum in 1968 when the newer Main Library opened at 203 S. St. Mary’s St.
Because the building’s deteriorating physical condition presented a danger to the collection, it was closed in 2001, and the circus memorabilia transferred to the Witte Museum, the secondary beneficiary in Mr. Hertzberg’s will.
The books and similar items from Mr. Hertzberg’s gift were moved to the Central Library.
The building was leased to the National Western Art Foundation in 2006, which is conducting a renovation process to convert it to the Dolph and Janie Briscoe Western Art Museum.
Through both permanent and traveling exhibits, the museum will showcase art and artifacts depicting the Old West and the lives of cowboys and vaqueros. The museum will also house a History Center Portal operated by the San Antonio Public Library, featuring both electronic and static displays of the library’s historical resources.
Next to the museum will be a pavilion with a meeting facility, galleries and a sculpture garden.
The Briscoe Western Art Museum is tentatively scheduled to open December 2011 or January 2012. 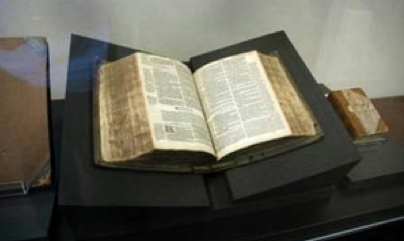