The weather is moving towards “brisk” temperatures in the 70s, pecans are falling from the trees and Los Spurs are back at it on the court. This means one thing: we’re on a fast track to Thanksgiving and that glorious food. As we all know, the centerpiece of any good Thanksgiving Day meal is the turkey—that glorious bird that’s either roasted, fried or smoked. But if you’re a trypto-fan like me, you want turkey throughout the year, not just on the holidays. One of the best places in San Antonio to order it is at the Big Bib BBQ on Austin Highway.

I’m an unabashed fan of the Big Bib. While the Granary, Smoke Shack and Two Bros. always seem to garner the awards and make the “best of” lists, the Big Bib churns out consistently good barbecue at the best prices in town. Once housed in a very small spot on Austin Highway, the restaurant moved up the road to a larger building at the end of a strip center. The inside is decorated with murals on bright blue backgrounds that feature the American flag, the San Antonio skyline and their saying of “You deserve to eat this good.”

Get there early because the line will quickly snake out the front door, often filled with men and women in the military. Additionally, the Big Bib has a patio with an outdoor stage called “The Big Bib Too” and features musicians on the weekend. It was a beautiful day—and the inside was packed—so we decided to eat outside on the patio.

While not listed on the menu, I favor the two-meat, two-sides plate. You have plenty of options on building out your plate, but I would start with the smoked turkey. It’s always right on the money. Unlike that one Aunt who serves such a dry turkey that you have to drink a gallon of tea with every bite to choke it down, the Big Bib’s turkey is incredibly tender. It’s easy to chew, incredibly flavorful (for all you sauce fans, try it with their Tangy Gold) and will make you want to up your turkey game for Thanksgiving.

If you’re not wanting to go “double turkey,” order the jalapeño sausage—they’re not trying to impress you with how hot they can make the sausage by packing it with peppers. Instead, it leaves a slow burn at just the right spice. The sausage pairs well with the Bib sauce.

View a photo gallery from the author's visit below: 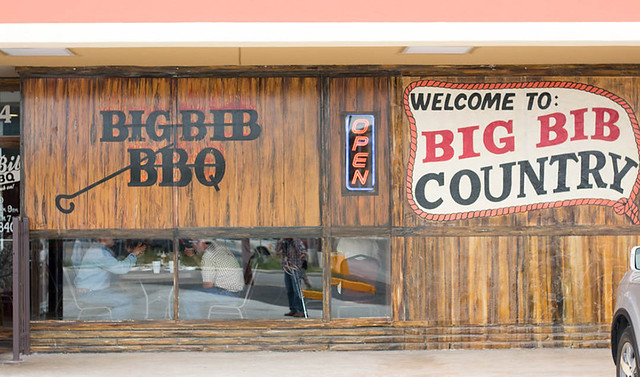 Their brisket is good, but I will say that it is the least consistent of their meats. Sometimes I’ve gone and the fat was perfectly rendered where it would just melt in your mouth; other times it has been a little over cooked. But, when they are on, they are on and rival any of the other joints in town. Just note that when you’re asked whether you want “marbled or lean brisket,” the answer is always marbled. The brisket doesn’t need a sauce, but if you insist, go with the Honey BBQ.

When it comes to sides, I love their green beans. They mix them with a lot of spices and sausage to present a side that even a seven-year-old-vegetable-hater would love. Your other side depends on what you’re going to do with dessert. If you don’t have the money to order their cobbler (more on this later) but still have a hankering for something sweet, get their sweet potato casserole. This side could stand on its own as a dessert (it’s chock full of brown sugar and butter) and is such a treat. But admittedly, it would be overkill if you plan on ordering the cobbler. Your other option is to get the baked potato casserole, a potato salad of sorts that is packed with sour cream and cheese, the perfect savory side for your meal.

But let’s talk now about their cobbler. Holy cow folks, this is the real deal. Not only do you get chunks of fruit in every bite, but that crust is so thick. Typically, the cobbler to order is peach (especially when peaches are in season), but they were sold out on this visit so I opted for the blackberry cobbler and wasn’t disappointed. Know that this dessert is incredibly rich and best shared with three or four people.

If you love turkey as much as me, you’ll find the Big Bib become your go to spot when you’re craving it after the holidays. And for you barbecue fans that haven’t quite ventured out of the new “Broadway BBQ Corridor,” make a trip to the North East side. The Big Bib might just become your new favorite.

Garrett Heath has written about the food and culture of San Antonio since 2009 on his blog SA Flavor. He also has an online store that sells Fiesta Medals and uniquely South Texan designs. 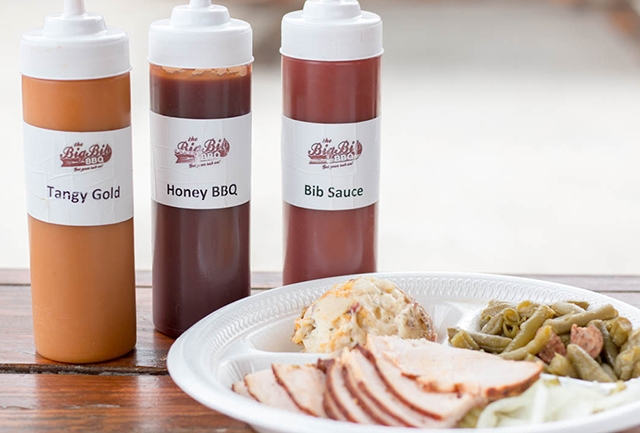