David Broder, the great Washington Post columnist who died Wed., March 9 was a giant in journalism – and a central help to me in a book, just published, which benefitted from Broder’s characteristic generosity and insight.

I first connected with Broder a dozen years ago through Karl Rove, the Bush political strategist, who invited Broder to join us by teleconference in a class at the University of Texas at Austin that Rove and I were teaching together in spring of 1998.

Asked by one our students what he thought of negative advertising, Broder replied, “I take a dim view of [it]…If, as Thruston Morton suggested, the essence of politics is really constructing a government, then the criticism of [media] campaigns" is that they produce "a climate [directed mainly] at winning."

Politicians in Washington “are running scared,” Broder said. “We’ve had smaller and smaller voter turnouts since 1928. If the strength of government rests on trust from people, when fewer give their votes, the government is weaker.” The result among voters is an “attitude…of deep cynicism…and [an inclination] not to help govern…for themselves.”

The analogy, Broder suggested, is to a physician: “If your patients distrust you, it’s a debilitating thing.” The increasing use of negative political advertising, he said, results in “declining participation, and declining trust in government."

“When politicians tell other people how rotten everybody else is…it’s not surprising we have the attitudes we do.”

Almost invariably, Broder said, “Politicians…make an effort to reconstruct the record in a way favorable to them…and so voters get less than they deserve.”

The “reconstruction of the record” is facilitated by the overwhelming use of media to wage political campaigns. Campaigns rely on messages divined and assembled with the help of careful polling, then conveyed through carefully selected media to drive voter response. The results undercut the power of party political organization, and have the effect of concentrating the power to reach and motivate voters in the campaigns themselves.

The result is to dilute not only the power of parties to exert influence in the give-and-take over policy, but to reduce the capacity of journalism to inform, and to deprive voters of what they need to make good decisions, Broder suggested.

Once they establish their messages, “Politicians are quite willing to indulge in repetition. But the press…abhors repetition. So meaningful stories are done only once -- and then are forgotten. The result is, there’s some dumbing-down of campaigns, and less content in them than in the sixties, when I was covering them.

“For example, presidential debates in 1960 were a dramatic innovation. Panels [of press people] compared the candidates side by side. There was a great upsurge in interest - and that was the last time.”

In more recent times, debates have increasingly come under the power not of the League of Women Voters or of journalists, as in earlier years, but of the candidates themselves, whose representatives carefully prescribe how the candidates will appear, and under what terms.

In the 2004 election, for example, the Bush and Kerry campaigns kept third-party candidate Ralph Nader out of the debate, and restricted the terms and conditions of the debates themselves through a thirty-two-page agreement (crafted in large part by Karl) that minimized the potential for each candidate to look bad. As a consequence, such debates, Broder said, are “more under control and there are conditions, rules, timing, format, that make them less useful. [They’ve become] exercises in manipulation, not in informing people and policy.”

At party conventions, Broder continued, “every single thing is done to evoke a particular emotional response. I call that manipulation. Others say that’s just smart politics… Everything is constructed, designed to produce an effect … to be positive for your side, negative for the other. Everything that does not is rigidly excluded.”

The preceding includes passages from Israel’s new book, A Nation Seized: How Karl Rove and the Political Right Stole Reality, Beginning with the News (Spokane, WA: Marquette Books, 2011). Broder was among leading journalists Israel interviewed for the book.

For Bill Israel's column on Egypt and the similarities between San Antonio and Cairo:   http://bit.ly/NCEgypt

Photos of David Broder provided by The Washington Post. Thanks, T.J.

Caption: David S. Broder, 81, a Pulitzer Prize-winning columnist for The Washington Post and one of the most respected writers on national politics for four decades, died Wednesday at Capital Hospice in Arlington, Virginia of complications from diabetes.

(Disclosure: Bill Israel is a member of NOWCast's Board of Directors) 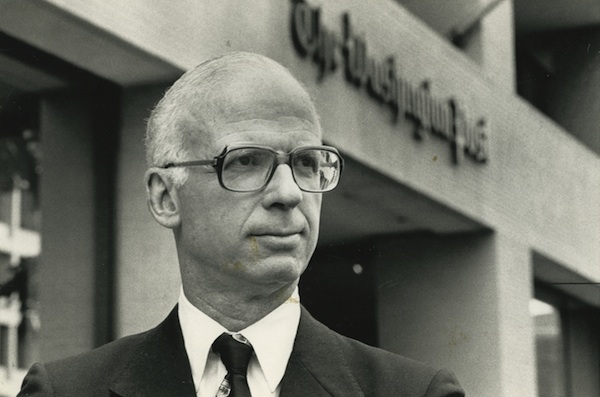