In my three-year tenure thus far at CPS Energy, I’ve received a great deal of valuable feedback, and lots of good questions from the community. One of those questions has been about the fuel adjustment charge.

As with many questions in our industry, the answer is complicated.  That particular line item on CPS Energy bills makes up for the difference between what the utility allots for fuel within the base rate, and the variation in fuel costs and types actually used each month.

Because some have asked to see a breakdown of those costs, CPS Energy will now publish that information on its website each month. Increased transparency, when possible, has been a CPS Energy goal since my arrival.

Starting in September, we will share what percentage of the fuel adjustment cost comes from the power we generate, renewables, the STEP program and, when applicable, what we buy from the open market.

For example, our energy market operations group estimated that for the month of August, CPS Energy would use roughly 32 percent nuclear power, 49 percent coal, 10 percent natural gas, 9 percent wind and slightly more than half of one percent of solar power.

By breaking down the components of the fuel adjustment charge, customers will now be able to see what percentage goes to renewable costs.

CPS Energy was recently challenged by the San Antonio Express-News Editorial Board for not releasing the price it pays for specific renewable contracts; non-disclosure agreements with our partner companies prevent us from doing so.

The challenge is a fair one, however, and going forward, CPS Energy will work with the private companies we partner with to craft agreements that are more transparent and would allow us the latitude to share the costs we’re incurring.

We can also, as we have in the past, share the cost of our renewable contracts in the aggregate.

Renewable power is more expensive than traditional fuels, and it makes up just a fraction of our overall generation portfolio. But renewables are also a hedge against future, and I believe certain, increased federal regulations on pollution emissions. Renewables are not only emission-free, they also use zero water for production — an increasingly relevant factor here in South Texas.

Solar in particular is incredibly valuable for CPS Energy, in that it is generating when we need it most, during hot afternoons when the demand for power, and thus its cost, can rise exponentially.

In fiscal year 2009, renewables made up 20 percent of the total fuel adjustment cost. By last year, that amount had risen to 28 percent.

In comparison, power generated by CPS Energy’s nuclear, coal and natural gas plants made up about 60 percent of fuel adjustment costs in the last five years; that amount is projected to shrink to 45 percent by 2018.

By saving 771 MW of power by 2020, CPS Energy will be able to delay building or purchasing its next fossil fuel plant — and that saves customers money. We’re doing that by offering rebates on efficient lighting, heating and cooling, weatherization and using demand response programs to decrease peak load.

The City Council in 2009 approved STEP and its funding mechanism – CPS Energy must certify, through a third-party, the amount of energy it has saved each year, which can then be recouped through the fuel adjustment charge.

The utility business is a complicated one, but it’s important to me that our community understands what goes into calculating a monthly bill. I encourage you to reach out with any questions or concerns you might have, either by leaving a comment at the right on this page, through our social media channels, attending one of our upcoming Customer Care Fairs or public input sessions. 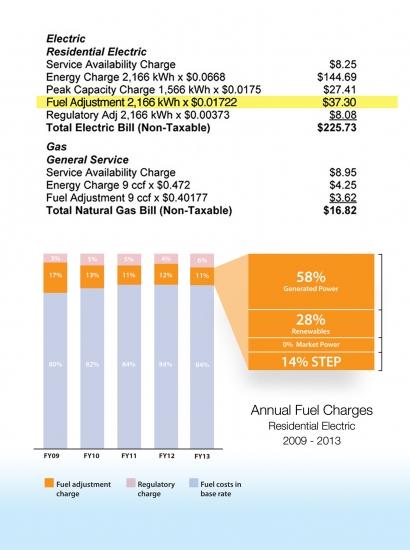