NOWCastSA streamed live video of an open discussion about food policy in San Antonio, and how to access fresh food in the community.

You can see the archived version of the video below. Video starts at 7:52.

The conversation was sparked by a free screening of "Food, Inc.," a feature-length documentary, at El Progreso Hall in the Guadalupe Street neighborhood.

According to www.foodincmovie.com, the film "lifts the veil on our nation's food industry, exposing a system controlled by international corporations that prioritize profit over the health and safety of consumers."

The discussion after the movie was facilitated by experts in food policy, treatment of animals, worker rights, privatization of nature loss of culture and health and illnesses.

The event was sponsored by Food Not Bombs, Peoples Power Coalition and Southwest Workers Union in partnership with Active Voice and Participant Media as part of the Ingredients for Change Campaign. 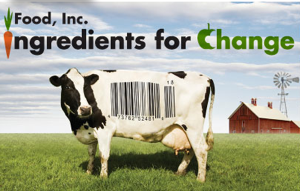