Five months into the SA2020 visioning process, San Antonio's enthusiasm hasn't dimmed, with as many as 1,000 people expected to gather again for a community conversation about charting the city's course for the next ten years.

Organizers say so many people have responded for the fifth and final SA2020 workshop meeting on Jan. 22 at TriPoint's 750-seat Grantham Center, that overflow rooms are being prepared at the nearby San Antonio Water System headquarters building. The event is titled "Putting it all together."

NOWCastSA will Webcast the event live from 9 a.m. to 11:30 a.m. Saturday, so those who cannot attend can watch and participate online through a live chat function that allows people to comment and pose questions to the organizers who will respond live in the chat. The webcast is free and available at www.nowcastsa.com to anyone with a computer connected to the Internet.

In this interview, facilitator Ben Warner, of JCCI talks about how the size, diversity and friendliness of these civil conversations make San Antonio special and goes to the core of our democracy: 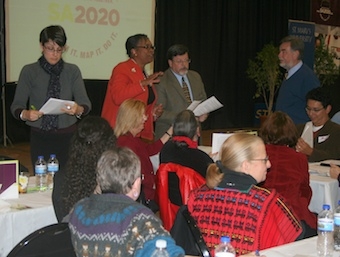