Christmas came early for the San Antonio Eastside Promise Neighborhood project: The collaboration, led by the United Way of San Antonio and Bexar County, won a $24.6 million grant to from the federal government to provide "cradle to career" services to improve educational achievement.

Mayor Julian Castro announced the grant at a news conference on Dec. 19.

"What this means is that education on the East Side will never be the same," Castro said.

The grant, distributed over five years, will go to support services from early learning to college and career in a 3.2-mile area that includes the Wheatley Middle School, the Bowden, Washington and Pershing elementary schools and the Tynan Early Childhood Center, along with Sam Houston High School.

This award follows a $312,000 planning grant awarded to the United Way in September 2010, to help community partners assess and map a vision for the Eastside Promise Neighborhood project.

The project grew from a pledge by President Barack Obama to create 20 Promise Neighborhoods designed to replicate the success of the Harlem Childrens Zone, which supports youngsters from pre-school through careers.

United Way Senior Vice President Toni Van Buren credited Castro with helping make San Antonio one of only five places in the nation to receive a Promise Neighborhood implementation grant from the U.S. Department of Education. More than 200 organizations from 45 states, American Samoa and Puerto Rico applied for the planning and implementation grants.

"Mayor, we never forget that, because you decided to put education out there, the feds look at us a little bit differently, Van Buren told Castro. "So thank you!"

From the outset, San Antonio's project aimed to break down the silos between governmental agencies and build a broad base of expertise, experience and engagement.

San Antonio District 2 City Councilwoman Ivy Taylor, a champion of the project located in the heart of her district, celebrated the community effort.

"This is about collaboration, it's not about any one individual or organization," Taylor said. "It's about all of us coming together to move forward in relation to a vision that we have for our community."

"I'm committing the District and all of its resources to making this work," Duron said. "We've climbed the hill and we're at the top … but our work is still ahead of us."

Among the partners in the collaboration are parents, neighborhood leaders, the City of San Antonio, the San Antonio Independent School District, the San Antonio Housing Authority, Family Service Association, the P-16 Council and City Year.

NOWCastSA also is a partner in the project and is scheduled to receive $50,000 a year in funding from the grant for the next five years.

The four other communities who received Promise Neighborhood implementation grants are: 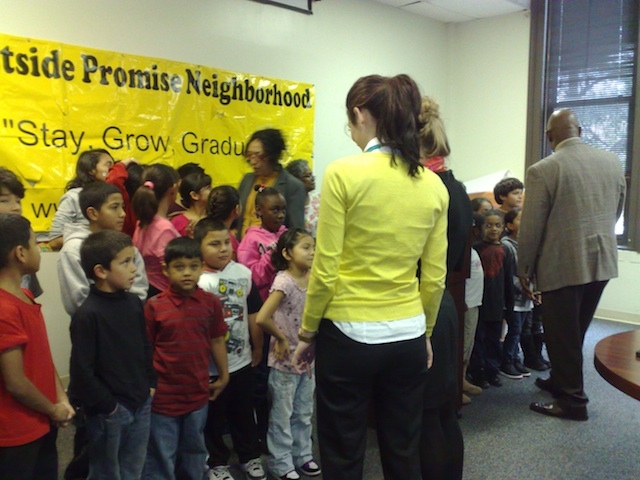