"This promises to be a big moment for our city which will position San Antonio as a national player in the New Energy Economy," Castro said when he invited people to the event in the Theater of the Buena Vista Building at the UTSA Downtown Campus.

"San Antonio is stepping up to lead Texas and our nation into a clean energy future and proving that investing in innovative technology to protect our health and the environment is also a great way to create jobs. Committing to cleaner sources of power will mean cleaner air for the families in San Antonio and opportunities for San Antonio's workforce," said Lisa P. Jackson, administrator of the U.S. Environmental Protection Agency in a news release. "By sending a strong signal of the local government's support for clean energy, San Antonio attracted innovative American businesses that will create jobs around technology that helps to keep the air clean."

The video is archived here for replay. You may add to the comments in the field on the right.

Editor's note: We've been looking at the numbers and it appears we had viewers today from throughout North America as well as multiple viewers in Poland, Denmark and Italy. A significant amount of viewers of today's livestream were from San Antonio and the surrounding area. 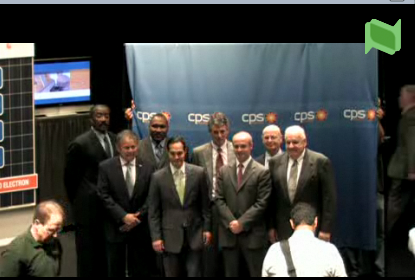