Replay the video: San Antonio Mayor Julián Castro delivered a United State of the City address to a crowd of more than 1,000 people, calling for an investment in a "Brainpower" community.

"Now is the time to have the conviction to say that if Austin or if Washington is going to pass the buck, we're not going to leave our destiny to chance," Castro said. "We're going to lead by investing when other cities are retrenching."

NOWCastSA Webcast the speech live and you can watch the archived video here:

(We started a little early, and they were a couple minutes late, so the event gets underway at the 7:23 mark. Scroll below the video for a detailed timeline.)

7:23: Welcome by Sam Dawson, CEO of Pape-Dawson Engineers, Inc., and Chairman of the Greater San Antonio Chamber of Commerce,

12:29: Remarks and introductions by Melinda Rodriguez, President of the Alamo Asiian American Chamber

17:23: Remarks and introductions by Theodore Guidry, II, Chairman of the Alamo City Black Chamber of Commerce.

Attendees at the address, titled "San Antonio:The New Face of the American Dream," filled the largest ballroom in the Henry B. Gonzalez Convention Center.

Note: This article has been updated several times to add addtional information and details. Photograph by Susana Hayward. 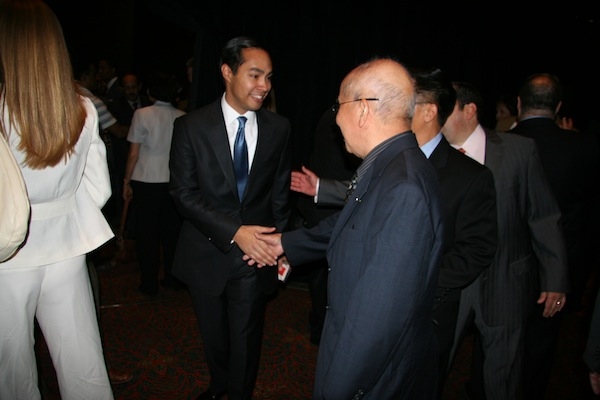