The event is the finale for College Week, which was organized by Castro, Generation TX, Cafe College and the San Antonio Education Partnership.

NOWCastSA webcast the event live, and you can replay the video here.  (Skip below the video for a timeline - we started way too early!)

Here is a timeline so you skip the playhead forward to what interests you most:

11:16: Audio begins, backed by JumboTron sponsor slides.
25:45: Video starts of people walking into the arena
32:08: Master of Ceremonies Gabe Zavala launches the afternoon with a series of contestants playing games
53:50: A series of paparazzi poses on the red carpet
57:11: Harlandale student April Arrendondo sings the National Anthem
59:30: Event begins with the Spurs Coyote and the Silver Fox dancing and throwing T-shirts to the crowd.
1:02:18 Mayor Julian Castro addresses the students
1:10:00: Senior Proclamation begins with seniors declaring their college choices as they walk across the stage.
1:20:46: The Spurs Coyote, Silver Fox and Castro throw T-shirts
1:23:14: Castro signs proclamation
1:34:20: Texas A&M Jaguar mascot interrupts
1:48:58: Mayor Castro and his twin brother, State Rep. Joaquin Castro, address the students
1:51:47: Event concludes
(Note: Please be patient while the video buffers after you drag the playhead forward. This is a long video file, so it will need buffering time even on a high-speed connection.) 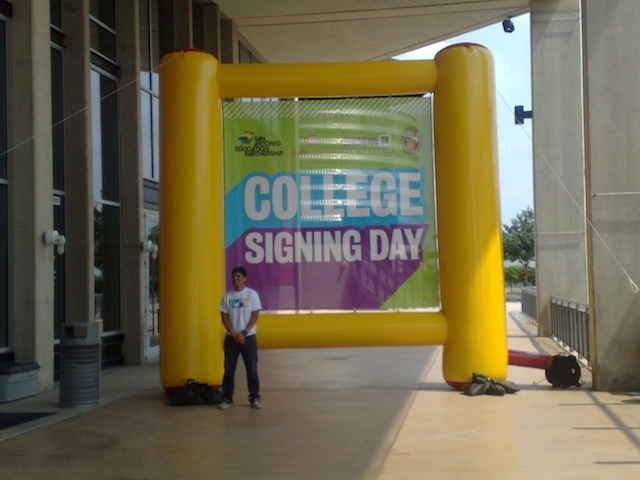