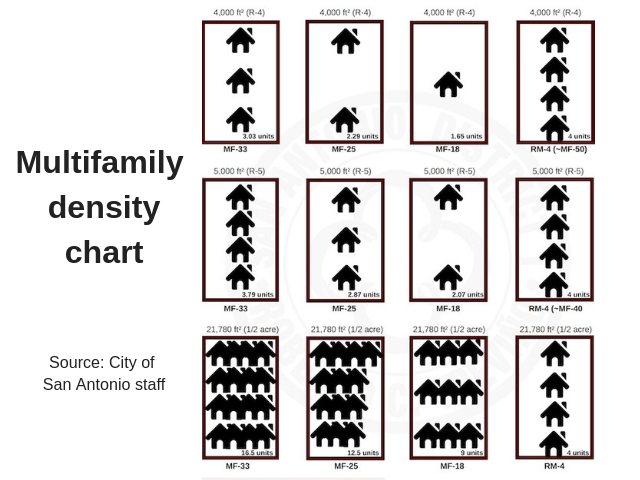 By Charlotte-Anne Lucas and Jolene Almendarez

Treviño’s motion to remove the MF-33 category from neighborhoods in the city’s Future Land Use plan failed by a 5-4 vote at the Oct. 11 San Antonio City Council meeting after a spirited discussion. (Watch video of the council discussion and vote here. )

Hours later, Treviño filed a City Council Consideration Request, or CCR, and his colleagues agreed to take up the matter at the Nov. 13 meeting of the City Council Governance Committee. (scroll down to read the entire 32-page CCR)

According to city documents, MF-33 appears to have been slipped into the Medium Density Residential category in the Comprehensive plan by city staff on May 3, 2018, after the public review process had already taken place, and just a few weeks before City Council was scheduled to adopt the plan.

Leaders of several urban neighborhoods objected to the new addition, and asked that the matter be pulled from the June 21 City Council agenda to allow more public comment on the proposal. NOWCastSA recorded video of the subsequent community outreach meetings, and the MF-33 category was given scant mention by city staff.

In fact, the planning department slide on medium density residential suggested MF-33 would not be located in the heart of neighborhoods: “Higher density multi-family uses, where practical, should be located in proximity to transit facilities.”  (Watch NOWCastSA video of the presentation here.)

MF-33 allows up to 33 units per acre with heights of four stories, and is considered high-density, more appropriate for corridors adjacent to transportation and employment centers than to residential areas with narrow streets and single family homes.

On Aug. 13, Treviño’s office sent city staff a formal request to remove MF-33 from the Medium Density Residential category and instead consider an MF-25 category, which allows a maximum of 25 units per acre.

Treviño “has concerns that MF-33 is permitted and encouraged inside of the neighborhood and excluded along corridors,” his aide Chrissy McCain wrote in an Aug. 13 email to Rudy Niño, Assistant Director of the Planning Department. “He (Treviño) also pointed out that this particular plan in its draft form encourages more dense development inside the neighborhood than on their major corridors.

“We will be requesting that changes be made to limit validation of MF-33 inside the neighborhoods and encourage it instead along corridors and connector streets.”

In addition to the impact the MF-33 category could have on neighborhoods, Treviño said the category was not officially added to the plan until May 3, after many community outreach meetings. Treviño said he requested changing the category in an email to city staff on Aug. 13.

Nevertheless, at the City Council meeting on Oct. 11, Niño said concern over MF-33 had just come up days earlier, a comment that caused confusion among other city council members about when the timeline of events occurred and what the public’s reaction was to the change.

Treviño said during the meeting: “I just want to be clear that if my colleagues are confused, it almost feels like it’s by design. And to suggest this is just something that ‘just came up’ is something I take exception to.”

He said the Future Land Use plan has always been about preserving the character of neighborhoods and respecting neighborhood plans.

Pressed on the issue by Treviño, Niño eventually admitted the MF-33 designation “has been part of a long-standing conversation with your office and also with a number of neighborhoods. I concede that.” Watch video of the exchange between the two here.

Niño said community outreach meetings indicated that public opinion was evenly split on the issue of whether to support the MF-33 designation. Niño did not provide public comment cards or other data from the meetings to document his assertion.

Letters from neighborhood associations throughout the city sided with Treviño’s amendment to limit the changes to a maximum of an MF-25 category.

G. L. Lamborn, President of the North Central Thousand Oaks Neighborhood Association said members of the association were concerned with development that is incompatible with a given Neighborhood.”

He went on to say that his association would “oppose any measure allowing or encouraging construction that is garishly out of step with our residential appearance.”

Tracy Moon, executive director of the King Williams Association, said in a letter: “The proposed MF-33 category seems more appropriate to the corridors of residential neighborhoods. Applying this zoning could alter the nature and character of our historic district.”

Treviño’s Council Consideration Request will be reviewed at 11:30 a.m. on Nov. 13 at Municipal Plaza Room B, located at 114 W. Commerce St. NOWCastSA will be recording the session.

Read it for yourself: Councilman Treviño's CCR, the neighborhood groups' letters about the issues and the email exchanges with the planning department on this issue.