The formation of a long-range master plan for Brackenridge Park is nearly done, city staff told the City Council in a B session on Jan. 18. The document is meant to help integrate the park into its evolving surroundings and restore much of it to a more natural state. Preservation of historical features, and a reduction of traffic and improved parking are also goals in the plan.

Xavier Urrutia, the city's Parks and Recreation director, briefed the council on the plan's progress. Urrutia reviewed the exhaustive process by which the city engaged the community about the master plan's development. The council can expect to review a final version of the plan in Feburary.

Early on, many residents, especially long-time park visitors, criticized the plan's initial call for decreased parking space in favor of a so-called grand lawn. Critics also dinged the city for proposing a closure of some roads and implementing some type of tram system to move visitors around the park. This and other sentiment from residents were noted in various public hearings.

VIDEO: Viewers can watch a meeting of the full council session below.

In the end, most people engaged in the process nixed the ideas for decreasing parking, closing roads, a grand lawn, and a “people mover.” Most people did support other proposals, such as restoring natural features, enhancing water quality, preserving and restoring cultural and historic aspects, and increasing park visibility and pedestrian access.

In the fall, there were a series of public events at the park, each designed to entertain and educate attendees about the park and inform them of the plan's development.

Urrutia reassured the council that the ideas that received the most public opposition are not being included in the park's master plan. Mayor Ivy Taylor and some council members applauded the city's focused community engagement effort.

"Brackenridge Park is a very important community asset," Taylor said, adding it makes sense to protect and preserve the park.

"We're happy to see this master plan go through with little community pessmism, that we didn't talk with the public," said District 2 Councilman Alan Warrick.

Warrick emphasized the need for continued public engagement on the development of parks, not just Brackenridge, which is split between his district and Council District 1.

"It's a historic park, but we're setting a historic methodology for engaging the community," District 1 Councilman Roberto Trevino said.

"This is a citywide project," Warrick added. Over time, city officials and many supporters have called large parks such as Brackenridge as parks that have a significant impact on San Antonio's population.

This has been a talking point especially in discussions about proposed projects in the city's planned $850 million bond, which voters will consider May 6. The bond includes $7.5 million in improvements for Brackenridge Park, $7 million for San Antonio Botanical Garden upgrades, $5.5 million for a San Antonio Zoo parking garage, and $2 million to expand the Brackenridge parking garage.

"It is a citywide project," District 9 Councilman Joe Krier agreed. "I see people there, from all over the city, all the time."

District 7 Councilman Cris Medina asked about another area feature, the Sunken Gardens Theatre. Urrutia said there are structural issues that must be addressed to help revive the theatre's ability to host musical events on a regular basis.

District 3 Councilwoman Rebecca Viagran said whatever can be done to protect and preserve Brackenridge Park is vital to the city and the nearby neighborhoods.

"The park is all of ours because it is easily accessible and it's in the middle of the city," she added.

**Cover Image: Children play during a sunny afternoon at Brackenride Park. Photo by B. Kay Richter. 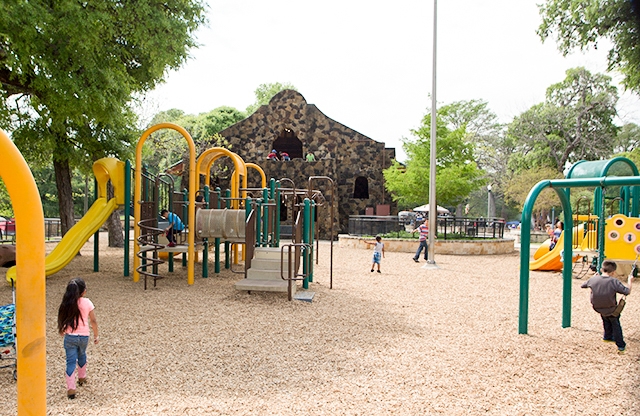