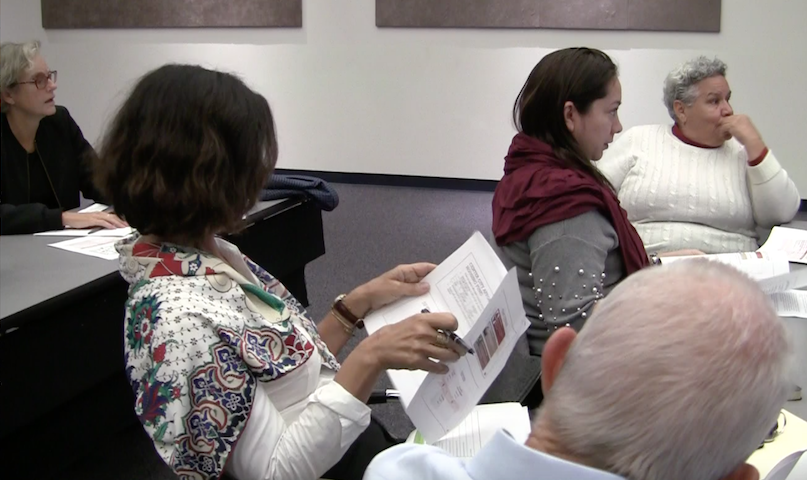 Correction: This story initially attributed details specific only to the fee waiver program to CCHIP. We apologize for the error, which has been corrected.

COPS/Metro Alliance and Tier 1 Neighborhood Coalition are lined up against a proposed housing incentive policy after city staff ignored public input and did not study the displacement impact, as is equired under the new Housing Policy Framework.

Neighborhood leaders criticized the plan and the process during a contentious, two-hour, invitation-only meeting Dec. 4 at the Central Library, led by Assistant City Manager Lori Houston.

After meeting with developers to create a new fee waiver policy, formerly Inner City Reinvestment Infill Policy (ICRIP), and revisions to the Center City Housing Incentive Policy (CCHIP), city staffers invited neighborhood leaders to hear about the proposed changes. Houston reminded attendees upfront that the policy, which was originally passed by City Council in 2012, is meant to stimulate economic development and is not an affordable housing strategy.

The invitation for the 3 p.m. meeting went out to neighborhood leaders from Mahncke Park, Tobin Hill, Government Hill, Downtown, Dignowity Hill, Lavaca, King William, Lone Star, Roosevelt Park, Prospect Hill and the Historic Westside Residents Association, and it requested that no more than two representatives from each area attend.

The new suggestions, while seemingly intended to support efforts to prevent community displacement, received immediate blowback from neighborhood representatives, who were hearing details for the first time.

Cynthia Spielman, president of the Tier 1 Neighborhood Coalition, summed up the community's apprehension. “There is a fear that (even when) things that look positive, in our experience, instead, neighborhoods often have had disastrous results. We think of them later as unintended consequences, but they aren't unintended when we keep bringing them up and then... no one pays attention to them."

Watch the entirety of the meeting in the video below, which is linked to throughout the article.

“Not really affordable by local standards”

City staff said the affordable benchmark is  80 percent of the Average Median Income for a family of four in the greater San Antonio area, or about $53,440. That is the figure used by the U.S. Department of Housing and Urban Development (HUD) to determine issues regarding federal tools and loans. But the "greater San Antonio area" also includes people living in surrounding cities and towns, where incomes are higher.

For a family of four living inside the City of San Antonio, the Average Median Income, known as AMI, is instead about $46,700. So when the City uses the HUD definition, it is nearly 100 percent of AMI in San Antonio.

The use of the numbers that do not accurately reflect residents of San Antonio was not lost on community leaders at the meeting.

Spielman was among many who pointed out that the numbers being used are “not really affordable by local standards.” And Amelia Valdez, of the Historic Westside Residents Association, said the HUD 80 percent AMI is twice the amount of the average income on the West Side.

Houston said the HUD number is being used because local nonprofit organizations, such as Habitat for Humanity and other affordable housing developers, asked that HUD numbers be used. She said federal tools and grants are based on those numbers.

When asked specifically why the number couldn’t be lower to better reflect San Antonio residents, Houston said without further explanation, “We’ve looked at that, but we’re going to keep it at these levels.”

“It could result in tremendous displacement.”

During the meeting, community leaders made it clear that there are many ways communities can be gentrified and people can be displaced.

For instance, Anisa Schell, a board member for Tobin Hill Community Association, said the CCHIP expansion includes the Pearl Brewery area just off of Broadway.

“It really does have an effect on the neighborhoods around it,” she said, an effect that the city hasn’t recognized that it doesn’t understand.

Houston conceded that there is no current plan to do a displacement impact study on all 64 projects issued under CCHIP. But she said the fee waivers are essential to stimulate economic growth in “risky” areas of San Antonio, where developers wouldn’t usually build. Neighborhoods, she said, are not eligible for CCHIP incentives.

Houston said “luxury” developments are also disqualified from applying for the incentive. Luxury developments are classified as any project for sale over $360,000 or any rental unit priced at more than $2.75 per square foot.

But Cherise Rohr-Allegrini, president of the Lavaca Neighborhood Association, said application requirements and limitations do not mean people will be able to afford to continue living in their neighborhoods.

For instance, she said the $360,000 sale cap might seem fitting in some neighborhoods but are actually destructive in others where higher property values mean higher taxes, which will price people out of their homes.

Valdez said, “What I'm saying is, I’m going to put it on the table, it’s hard times for us right now on the West Side. We barely can keep ourselves afloat.”

Respect for citizens should reflect respect shown to developers, nonprofits

For-profit and nonprofit developers were both consulted when creating the new CCHIP revisions, Houston said, so city staffers would understand what developers need to feel incentivized to build housing in San Antonio.

The neighborhood representatives at the meeting, though, asked to be given the same respect.

“I would rather have some more community input about what those policies and programs would look like,” Schell said.

Houston said the public has had an oportunity to provide input. She said she met with the neighborhood leaders at the beginning of the CCHIP revision policy and offered to go to their neighborhood association meetings.

But people said the meetings times offered by Houston were limited and did not accommodate people who had to work or care for children. Valdez indicated that there was one, so-called public meeting where she was the only attendee. And people were quick to point out that while staffers claimed the meeting they were in was public, it was actually invite-only and the general public was not aware of the meeting.

Schell said city staffers spend their days working on the revisions and unfairly expect members of the public to know the same terminology and details as they do in meetings. She said the reality is that most people attending the meetings with city staffers need more time to talk about the issue with their associations and determine what CCHIP revisions and new fee waiver program could mean for them.

The community leaders resoundingly asked for more time -- to talk to people in their neighborhood associations, to publicly hash out displacement policies and studies, and to better understand the revisions.

“I do think since the city did take the time to get input from the development community they should give the same respect to their citizens,” Schell said.