Every year on the last Saturday of March, thousands of people in San Antonio gather to celebrate the life and legacy of Cesar Estrada Chavez. This year’s march had special meaning for me, not only because it was the 15th year of the march and because it was my 11th year as one of the organizers. It was because I got to march along one of my role models.

This wonderful person is Dolores Huerta, the co-founder of the United Farm Workers. She worked for many years with Chavez to fight for the rights of farm workers across the United States in the 1960’s. They both sacrificed many years of their lives and lived in poverty to help others, especially those who needed it most.

At the time, farm workers were exposed to poisonous pesticides while they worked the fields, causing their children to be born with physical malformations and/or cancer. They had no voice or power against the multimillion dollar companies, so it took Chavez and Huerta to organize, taking on the companies to get the justice and rights the farm workers so desperately needed.

They also fought company growers to stop the use of toxic pesticides that Americans ingested daily in their fruits and vegetables. Both Chavez and Huerta put their lives on the line on several occasions; Huerta nearly lost hers after a police clubbing at a rally in 1988.

Both leaders were very courageous and strong, and they never backed down. Huerta has taught me that a woman can be a very powerful, fierce leader and have a great impact in politics and in the lives of others. She was one of the people who pushed very strongly in Congress during the 1980’s for an amnesty program for immigrants.

In San Antonio, we march every year to remember the work and changes that both great leaders accomplished for all Americans and their legacy lives on across many cities, especially San Antonio.

The Cesar E. Chavez Legacy and Educational Foundation (CECLEF) continues to instill in the community one of the major beliefs of both leaders, which is education. Even though Chavez only had an eighth-grade education, he was a self-educated man who immersed himself in books throughout his lifetime.

Huerta was an elementary school teacher who left her job to devote her life to the UFW. So it is in this belief that the local CECLEF believes in helping children to continue with their education. Every year, the foundation raises money to give scholarships to students in financial need.

I was the recipient of the Cesar E. Chavez scholarship when it was called the Cesar E. Chavez Committee, before we became a 501(c) 3 and I became a board member. I received it for three years while I got my Bachelor's in Biology and minor in Legal Studies from the University of Texas at San Antonio.

Even though it wasn't a lot of money, the scholarship helped me buy textbooks, which can add up when you're a student. It also gave me a sense of feeling that the community supported and encouraged me to continue with my education. I could feel their hopes that through education, I would one day give back to the community.

In the past, the foundation has given up to 30 scholarships in one year and is looking forward to increasing funds they receive to continue helping more students with their education.

The 15th Annual Cesar E. Chavez March turned out to be very memorable, especially when I was recognized at the CECLEF annual banquet on March 25 for devoting 11 years to the foundation. I received the award from Huerta herself. I will never forget that day. I was so surprised and grateful, but most of all, I was honored.

I hope that next year, more people will join us in celebrating the life and legacy of these great role models and leaders - Cesar E. Chavez and Dolores Huerta. 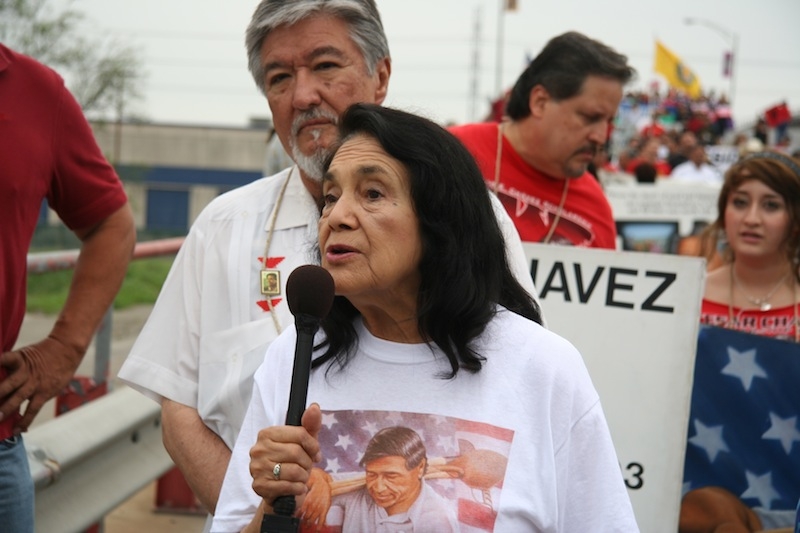