The San Antonio Neighborhoods and Livability Committee voted to jettison some controversial proposals from the Brackenridge Park draft master plan and sent city staff back to ask the people who use the park what they want. (Scroll down to replay video of the meeting.)

The move came after residents packed public hearings to criticize the both the Brackenridge Park draft plan and the process. (See earlier articles and videos from those hearings here.)

"Whether we want to admit it or not, the City has made mistakes around transparency and inclusion in this process and also in other processes," said District 4 Councilman Rey Saldaña.

The Brackenridge Park draft master plan has come under fire from hundreds of residents. The city first met with stakeholders in August 2015, but residents widely criticized various parts of the plan and the process after the first draft was made public in June 2016. (See more here.)

The draft master plan included closing park roads to improve pedestrian interconnectivity and cutting down on parking space to increase green space, but several residents fear those changes could make it harder for elderly and mobility-impaired visitors to reach their destinations within the 300-plus-acre park.

Critics of the plan also argue that the public - regular users - were excluded from the discussion process, and worried that undesirable changes would be implemented too quickly.

Xavier Urrutia, the city's Parks and Recreation director, told the committee on Monday that the city has recorded 384 attendees spread at recent public meetings about the draft master plan. A majority of the attendees at these presentations, Urrutia said, formed a consensus against the aforementioned controversial proposals. Attendees also developed a consensus of support for other strategies in the draft plan, such as restoring natural, cultural and historic features, increasing park visibility through better signage and monuments, and enhancing neighborhood connectivity and pedestrian flow.

Urrutia said much of Brackenridge Park is in need of comprehensive improvements. Assistant City Manager Maria Villagomez told the committee that much money has already been invested into maintaining retaining walls and other parts of the San Antonio River that flows in the park. She added that city staff will recommend more money in the city's 2017 budget for park improvements, but that it still won't be enough to address the existing need. That's where the city's planned 2017 bond issue could help.

“Almost every inch of Brackenridge Park is an archaeologically significant site,” said Urrutia. “Anything we do we have to do carefully and deliberately.”

More than 20 residents attended Monday’s meeting, with a handful taking to the podium at the Municipal Plaza Building to speak their minds. Much of their criticism was directed to the idea that generations of local families - including working-class Hispanics - would be negatively affected by proposed changes in the park.

Former City Councilwoman Maria Berriozabal said language in the draft plan discourages current park users. She said the draft plan only once used the word “picnic,” almost an affront to residents who regularly enjoy picnicking at Brackenridge. Picnicking in Brackenridge Park is a tradition for many locals not just on Easter Sunday and on summer holidays, but also for family celebrations and weekday lunch breaks.

“I believe your work is at the heart of having a good quality of life,” she told committee members.

“We all grew up in Brackenridge Park. Some of us hold it near and dear,” she added.

Ramirez agreed with Berriozabal that the draft plan ignores the needs of current park users and caters to the projected wants of newcomers. She expressed concern about the proposed “grand lawn,” a feature that polarized the community. She also is worried how the San Antonio Zoo’s planned parking garage may impact overall area parking, and whether users there would be charged a fee to park.

Gianna Rendon said going to Brackenridge Park should continue to be a family affair, and remain accessible to people of all ages and backgrounds. She noted how her mobility-impaired grandfather would have trouble getting around the park if parking space is reduced.

Graciela Sanchez, executive director of the Esperanza Peace and Justice Center, said the city must open up the process in discussing the future of Brackenridge Park.

“We are a people invested in San Antonio,” she added.

Sanchez said she feels critical decisions are being made behind the scenes between city staff and powerful stakeholders. She recalled the controversy over Alamo Beer Co. transforming property in the shadow of the historic Hays Street bridge into a business that she said benefits the brewery owners and not the neighborhood.

“Everything is being privatized, and these are public spaces,” Sanchez said.

George Cisneros was one of a handful of attendees to say that is okay to slow down the park planning process. He then addressed a broader issue, a fear that higher-end, infill development along Broadway is displacing long-entrenched working-class residents.

He added that only owners and developers of such properties stand to benefit from tax incentives provided by local government. Some residents feel that the future Brackenridge Park envisioned in the draft master plan would only benefit a small portion of the city's rising population.

Lynn Bobbitt, Brackenridge Park Conservancy executive director, said that the rising ride of scrutiny of the park plan would only result in a stronger park. More people know about the planning process and want to provide input, she added.

“I’m not discouraged. I think what’s come about is encouraging and exciting. We know the community loves this park,” she added. Bobbitt agreed that the process could afford to slow down.

Jennifer Martinez, Parks and Recreation Board member, said comments she has heard from users reflect not only their fond recollections of the park in the past but also of its future. In one recent conversation with a local parent, Martinez noted that the parent enjoyed how the park is accessible and the area is full of free-to-affordable, family-friendly amenities. This, Martinez said, is key to Brackenridge’s evolution.

“This park is a place of equality for all families,” Martinez said.

Saldaña said the community’s rejection of the early draft plan was “an awakening” that has compelled the city to widen the planning process.

“We need to be reminded that people don’t just buy into the outcome, they have to buy into the process,” he added.

Saldaña explained if the city significantly alters the park’s look and feel that it may give “the community a sense that things are changing and not to their betterment.”

Committee member and District 2 Councilman Alan Warrick applauded residents for making a stand on the park plan and the process.

“The fact that we’re holding a committee meeting at six in the evening shows we’re making an effort to make things accessible,” Warrick said.

Committee member and District 7 Councilman Cris Medina agreed that the city should be more methodical about the park planning process.

“We recognize what Brackenridge Park means to all of us,” he added.

Treviño said the city will encourage more public participation in a process that will impact a beloved natural, historic and cultural treasure - Brackenridge Park.

“We’re not going to do this process without you, the community,” he added.

Berriozabal and other attendees said Monday’s meeting looked like a turning point in the city’s direction on the plan, as local officials acknowledged that the public’s serious misgivings should have been given more consideration earlier on in the process. Berriozabal added that as the city proceeds with the plan, and the 2017 bond, openness and transparency will help to shore up public support. 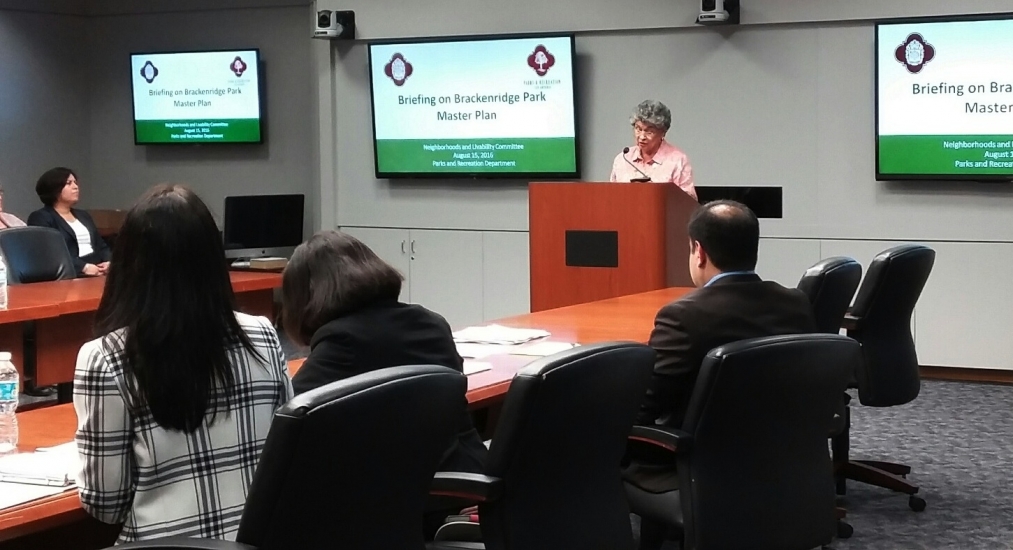