Community celebrates "No Thru Trucks" signs on Quintana Road

Six months after community members blocked traffic to tell trucks that they were going the "Wrong Way" by driving through their neighborhood, rather than using the General Hudnell on-ramp built especially for the trucks, "No Thru Trucks" signs were installed and authorities have increased enforcement against truck traffic.

The transition of Kelly Air Force Base to Port SA included a new onramp built specifically for Port SA truck traffic to access Highway 90, but residents say the truckers were not using the ramp and are driving through the neighborhood streets at highway speeds around the clock.

The demonstration culminated with residents and supporters blocking trucks from coming in to the neighborhood.

The community surrounding former Kelly Air Force Base, now Port San Antonio, has grappled with health and quality of life  issues for decades.

More recently, because Port SA serves as a truck and rail hub for materials used in fracking activities in the Eagle Ford Shale, nearby residents have been plagued by increased diesel fuel emissions, noise, traffic and road damage.

Trucks speeding through neighborhoods to deliver cargo to Port SA has created a danger for the many children going to and from local schools. Residents say trucks fail to yield to pedestrians, cause accidents and the trucks spill out silica sand onto neighborhood streets, a substance used in fracking, that is known to cause respiratory and other health problems when inhaled.

The installation of these signs is a victory for neighborhood residents who called upon the City of San Antonio and Port SA to enforce restrictions on dangerous and destructive truck traffic in their community. Although there is still more work to be done, these signs are a first step towards protecting residents from the negative health impacts and increased danger related to increased truck traffic coming in and out of Port SA as fracking activity expands in the Eagle Ford Shale. 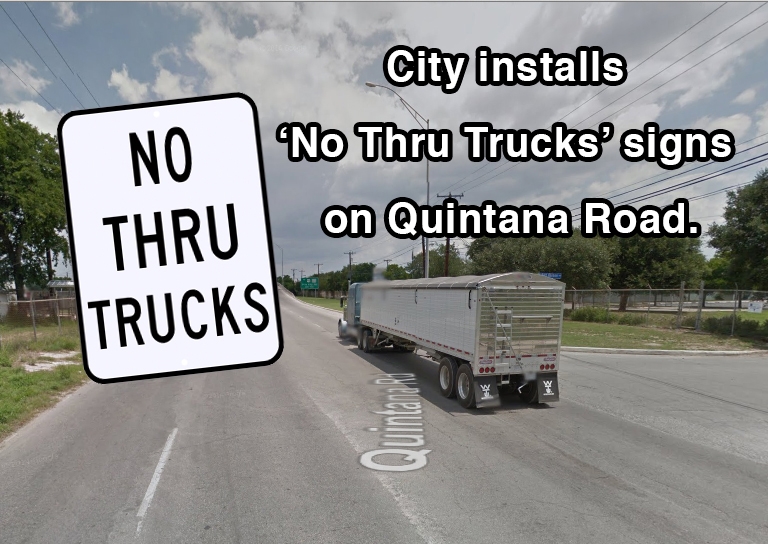