Community, faith leaders gather in the city for good

About 300 people community and faith leaders gathered at The Oblate School of Theology on April 3, 2017 for a conversation about San Antonio’s new Faith-Based Community Initiative, designed to strengthen the relationships between the city, area faith-based communities and nonprofits.

The meeting, titled In the City for Good, was convened by Pastor Ann Helmke, who was chosen to lead the initiative by the San Antonio Department of Human Services.

(See NOWCastSA’s story and video of that below.

Helmke said better connectivity between faith-based communities and the city could help more people in need.

“How can we finally get a communication system together that helps us on a daily basis to do our work...but also kind of an emergency broadcast system, so that when 400 immigrants show up, or we know they are coming tomorrow…to be able to put out that kind of emergency broadcast?” Helmke asked the group.

“This collaboration being put out by the city is to build collaboration and active partnerships,” Helmke said. “Wouldn’t it be nicer if we had a way to connect with each other that was faster, more efficient, and more effective?”

For its inaugural year, San Antonio’s Faith-Based Initiative goals include developing relationships, creating a network, facilitating a common vision and building a capacity.

It was not by accident that the convening was held at the Whitley Center of the Oblate School of Theology.

“We build relationships based on our common experience of the God we understand to be essentially relational, modeling for us how to be together regardless of religious tradition, culture, race or nationality,” said Scott Woodward, Dean of the Oblate School of Theology.

“Dare to Listen is a community initiative designed to encourage people to consider, to think, to explore, question, to appreciate differences...to reach across the fence, to build bridges,” said Mitchell.

“San Antonio could really benefit from symbolically coming to a table together and doing things, Bains said. In New York City, she said,  “there’s a city-wide Iftar dinner during Ramadan...everyone and every faith comes together and breaks bread.”

Organizing events like the Iftar dinner could help, Bains said. “I think that we could do that for our most vulnerable populations in San Antonio and really make public statements about love,” she said.

Retired University of Texas Health Science Center Neonatology Pediatrician Rajam Ramamurthy M.D. said children are a vital part of San Antonio’s future, and teaching them to be peaceful is key to a better generation.

Ramamurthy is also the recipient of the 2017 San Antonio Peace Laureate Award (see NOWCastSA's video of that ceremony below):

“I think through this initiative if we can create some collaborations where we give the adults, the teacher, the pastor, the parents, tools to bring up the children for the next generation of peace,” said Ramamurthy.

The next conference will be on the morning of May 25 and will focus on creating a resilient community and building a capacity. 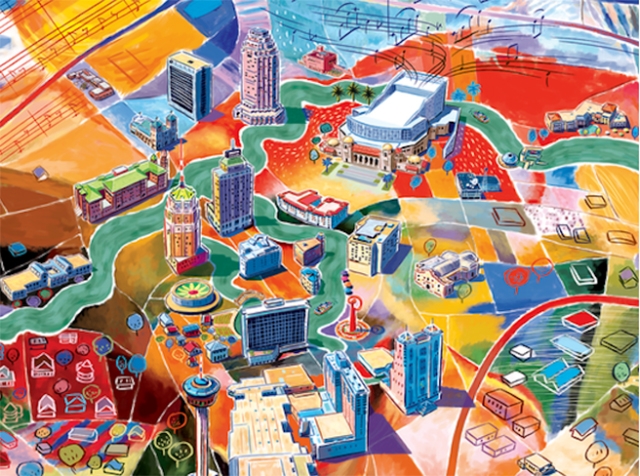