On the first day of early voting for the Nov. 6 General Election, U.S. Rep. Joaquin Castro (TX-20), and Texas State Senator José Menéndez (D-26) called on Bexar County to quickly resolve voting issues, and encouraged voters not to give up.

They said Bexar County Elections Administrator Jacque Callanen acknowledged that she was not prepared for the high voter turounout this morning and her staff was "overwhelmed" by it.

Castro and Menéndez, both Democrats who are friendly with Bexar County Commissioners, said they do not suspect ill will on the part of election administrators. "I don't think this is malicious on the part of County leaders or anyone in the elections department," said Castro. "But when it comes to suppressing votes, the shrug of shoulders or inertia can be just as harmful and damaging as active attempts to suppress votes."

Menéndez encouraged voters who got frustrated this morning to keep on trying. "Every vote counts," he said. "We're asking you please come back tomorrow...and bring people with you."

While he said he hoped for future improvements such as paper voting receipts and same day voter registration, he said there is something people can do today to help each other:

"One of the things we've had constitutents suggest is maybe we can post waiting times at different election sites...maybe can we put it online, instant media, on social media, where are the shortest wait times," said Menéndez. "We need to encourage that, we all need to be part of the solution." 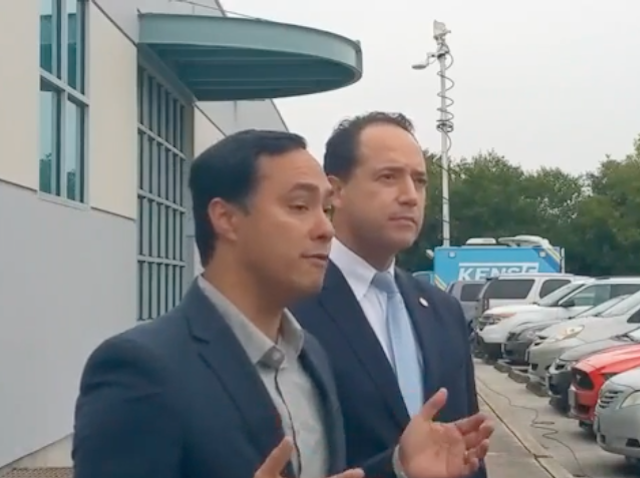