Congressmen call for end to family detention and private prisons

U.S. Representatives Lloyd Doggett (D-35) and Joaquin Castro (D-20) reiterated their call to close private prisons in Texas that are holding asylum-seeking women and children, and pledged to refuse campaign contributions from the corporations who run the prisons.

Their comments came at the conclusion of an educational Forum on Family Detention co-hosted by the Interfaith Welcome Coalition, COPS/Metro Alliance, NOWCastSA and RAICES Texas.

"We want to close the detention centers for the sake of the women and children who are still there today, but just as importantly, looking down the road, we want to make sure, for God's sake, if we have another wave of immigrants, asylum seekers, a year from now or 20 years from now, the United States government handles it differently next time and doesn't put them in jail-like facilities," Castro said.

Doggett agreed. "We need to end detention once and for all," he said. "Locking up women in detention does not work."

Nearly 200 people attended the Forum at the Whitley Theological Center in the Oblate School of Theology in San Antonio. Watch the entire webcast here.

Castro and Doggett, both Democrats who represent parts of San Antonio, were the only Congressmen from Texas who accepted the groups' invitation to the Forum.

Both were asked to respond to four questions after the presentation.

"Private prisons are influencing policy that keeps people detained for months for no reason other than profit," said Lupita Valdez of Sacred Heart Church, a COPS/Metro member. "One of the ways they influence policy is by making campaign contributions and lobbying congress.

"Will you share with us whether you have received campaign contributions from the private prison industry?  And will you pledge to say no to future contribution offers," she asked.

"I have not sought, am not seeking campaign contributions from the private prison companies," said Doggett. "I think you do have to follow the money, and I pledge to refuse such contributions in the future."

Castro also will not take contributions from private prison companies.

The GEO Group, one of the major private prison facility providers, also owns a company that makes ankle monitors, which some women have been forced to wear when they were released.

Valdez noted that women who are being released until their court dates now "face a different kind of detention. They must wear a modern-day 'ball and chain.' Ankle monitors are burdensome and heavy; their batteries are worse than our cell phones, so they require recharging several times a day; they carry the message that the women wearing them are criminals, as opposed to refugees; and ankle monitors are a source of profit for a private prison company.

"Will you work with us to find a better, more dignified way of treating refugees," she asked.

"I think ankle monitors are inhumane, that's not the way to treat refugees," Doggett responded.

Castro said he opposes using ankle monitors, in part because they are not necessary. "The numbers show that the overwhelming majority of these folks are coming back for their court hearings when they are supposed to, and that's what's important - that there be a process for them to make their claims for asylum."

A federal judge recently told the Department of Homeland Security to stop imprisoning the asylum-seeking women and children, but the Obama administration is contesting that decision.

Castro and Doggett both pledged to tell President Obama they oppose the decision to fight the judge's order.

"This administration should be implementing the judge's decision, not fighting it" said Doggett.

The Congressmen were also asked about HR 2808, a bill titled “Protecting Taxpayers and Communities from Local Detention Quotas Act,” which would prohibit Immigrations and Customs Enforcement (ICE) from negotiating a contract with a private prison company that guarantees the government will pay the company for a minimum number of immigration detention beds.

"Yes, I support HR 2808, and no, I don't believe it goes far enough," Doggett said. "I'm pleased that it would prohibit negotiating these bed mandates and quotas, it is a good start, but we need to end the quotas in both the private contracts and in the Department of Homeland Security appropriations bill."

While Castro also supported HR 2808, Doggett said that was not enough to overcome opposition in the U.S. House of Representatives.

Both men praised the IWC volunteers in the audience who have visited the women and children in detention, helped fund bonds to free them and supported them after their release.

"I applaud the courage of those who are living their faith and exercising it in responding to this situation," said Doggett.

Castro said he brought a Congressional delegation to San Antonio "because this has been the epicenter for advocacy - this has been the backbone of support for those women and children and the efforts to get them released from detention centers."

Doggett called for the struggle to continue. "There is so much opportunity and hope out there, that is what brings us together tonight - not only our faith, but our hope and belief that enough of us are engaged working together ... and it is what can end detention once and for all." 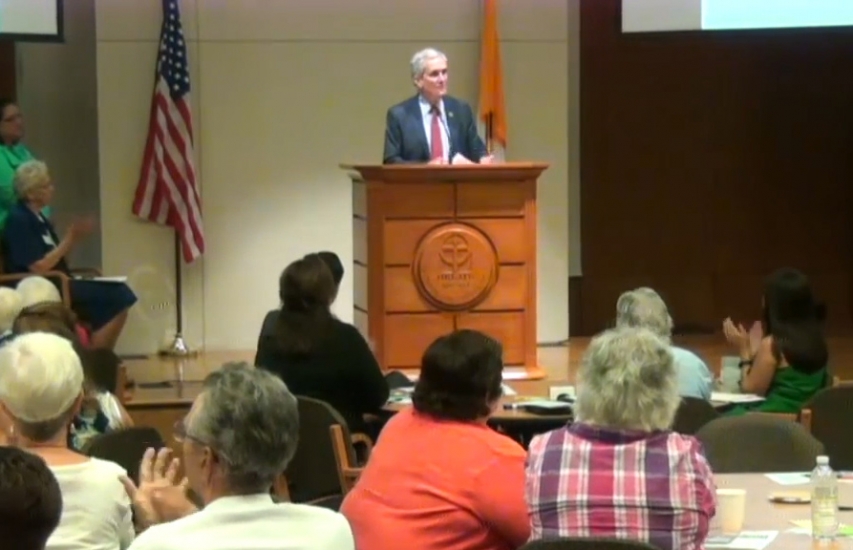