Margie Arnold’s 21+ years in the Air Force and her 18+ years of volunteering for the San Antonio Conservation Society and NIOSA have served her well as she again takes on the more-than-full-time volunteer position as chairman of “A Night In Old San Antonio®” which will occur April 23 to 26, 2019.   As chairman, she oversees an “army” of 10,000 volunteers that in turn entertain 85,000 NIOSA guests.

Already hard at work on 2019 NIOSA, her calendar rivals that of any CEO; a typical day consists of meeting or calls about details ranging from foods, coupons, appliances, ice, fire extinguishers and signs to souvenirs—just to name a few.

When asked about the highlights of her first year, she instantly replied:  “I am deeply grateful to our volunteers, led by my four selfless vice chairmen and NIOSA Treasurer.  I am incredibly thankful it was completed so successfully and safely: Successfully, in that we had multiple nights of record attendance and revenue, even with the thunderstorms on Wednesday and safely, in that we had no incidents and the new bag screening procedure was universally accepted. Those new procedures will now be SOP for all future NIOSAs.”

NIOSA is the top fundraiser for historic preservation in the nation and truly lives up to its motto as a “Celebration for Preservation.”   This four-night festival in the heart of downtown San Antonio celebrates the city’s diverse cultural legacy for more than 85,000 revelers annually.  Through the magic of 200-plus food, drink and atmosphere booths; 13 continuous live musical acts; two traditional ethnic dance troupes; children’s games; decorations; souvenirs; and costumed volunteers, NIOSA brings the city’s heritage alive in 15 cultural areas that celebrate the city’s past residents and settlers.

In the past ten years alone, more than $12 million has been netted at NIOSA to fund the Conservation Society’s mission to “preserve historic buildings, objects, places and customs relating to the history of Texas and all that is admirably distinctive to the state.”  NIOSA proceeds support restoration and preservation of historic properties and parks throughout the city and neighboring counties, as well as education and advocacy programs and projects such as the Heritage Education tours, seminars, community tours, scholarships, resource library and house museums.

Arnold has a lengthy history with NIOSA as a volunteer - serving as NIOSA Chairman in 2018, and before that serving as a NIOSA Vice Chairman from 2015-2017.  Prior to that ,she served as Area Vice Chairman of Haymarket for two years, and as a Vice Chairman and Area Chairman of Clown Alley for eight years.  She also volunteered in a souvenir booth, the Anticuchos booth, the Finance Room, and Surplus Foods.  She has served the Conservation Society in numerous capacities since she was elected to its Board of Directors in 2013. She served as its Treasurer for 2015-2016, and also has chaired the Advance NIOSA Member Ticket Mailout, Historic Preservation Month and Seminar, Properties Restoration and Utilization, and Community Building Grants committees.

After her Air Force career, Arnold started working for the Conservation Society in 1998 as an independent contractor doing accounting work, which segued into the NIOSA bookkeeper position in 2000. When 9/11 occurred in 2001, she chose to serve her country again as a Department of Defense and Homeland Security contractor until 2015.

Founded in 1924, the San Antonio Conservation Society is one of the oldest and most active community preservation groups in the United States. Beginning with efforts to prevent historic structures from being razed and to preserve such unique sites as the city’s Spanish Colonial missions, the society has been responsible for saving most of the historic attractions that now make San Antonio one of the top tourist destinations in Texas.  The Society was integral in the recent Missions’ nomination as an UNESCO World Heritage Site initiating the UNESCO nomination process in 2006 and continuing to support the nomination until its success in 2015. 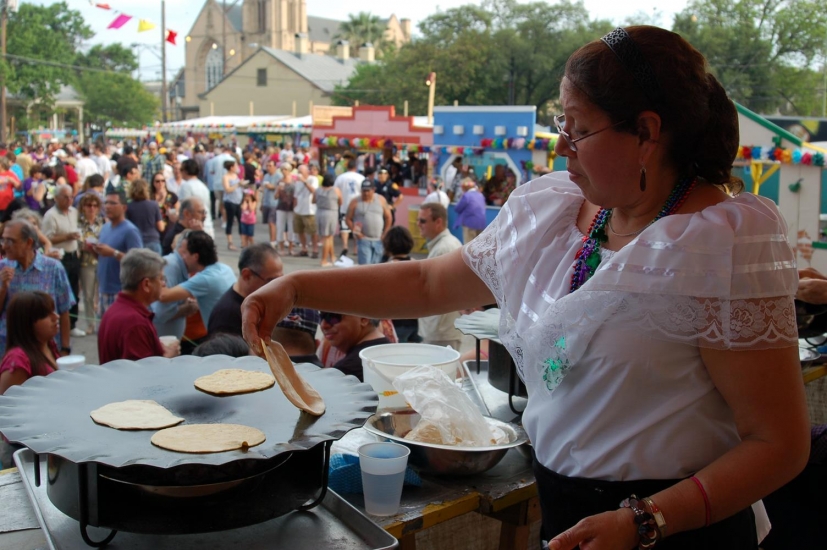