Parking was scarce on South Rosillo Street as San Antonians congregated into St. Alphonsus Parish Hall for a COPS/Metro Alliance meeting focused on the upcoming election.

View photos from the meeting here.

The standing-room-only COPS/Metro meeting conveyed the heightened political concerns and desires of San Antonians for their nation and city at large. If it's a trend, the packed parish bodes well for the city. Last year, San Antonio's dismal 14.12 percent voter turnout for the mayoral election was barely up from 2009's 11.61 percent turnout.

Communities Organized for Public Service (COPS) and the Metro Alliance, formed through the merger of the East Side Alliance and the Metropolitan Congregational Alliance, is a confederation of unions, schools and religious institutions. COPS/Metro Alliance's extensive membership includes leaders from various racial, ethnic, and religious backgrounds creating a political front that acts on behalf of neighborhoods and families. Now celebrating is 40th anniversary (video here) the organization is as robust as ever.

Increasing voter turnout is a key goal, but ensuring that San Antonio voters are educated on the issues is equally important. Indeed, Jesus Ramirez of the Archdiocese of San Antonio, stressed in his Sept. 12 bilingual presentation at the  COPS/Metro Alliance meeting that voters should refrain from being single issue voters.

“Issues like immigration, healthcare, education, the environment, and capital punishment are not non-negotiable,” Ramirez explained to the crowded parish. “This [the COPS/Metro Alliance meeting] is about the importance of acting locally. Voting and being politically active with a value system.”

C.O.P.S-Metro Alliance organizer Surya Kalra told the group to look within. “You have a lot more power than you realize,” she told the audience.

This coming November, SAISD is hoping voters approve a $450 million bond package to renovate 13 schools that have not been updated for a number of decades. The bond's funds will be used to repair and modernize heating and air conditioning units, plumbing, expand classrooms, and general facility upgrades that will prioritize repairing buildings that are more than 30 years old. Alongside this, SAISD proposed the Tax Ratification Election to generate an additional $32.1 million for school funding.

That $32.1 million would include $15.6 million raised in local revenue and $16.5 million in matching state funding. The additional funds, SAISD reports, would be used for operating costs like expanding after-school and summer programs, upgrading classroom technology and increasing the wages for lowest paid employees. C.O.P.S-Metro Alliance leaders talked about how minimal the cost would be to residents and how enormous the benefits would be for both the students and city at large.

The COPS/Metro Alliance leaders said that by voting for the Tax Ratification Election they would be simultaneously putting public employees on a path toward living wages while increasing after school and summer school attendance from 5,000 students to roughly 20,000 students. 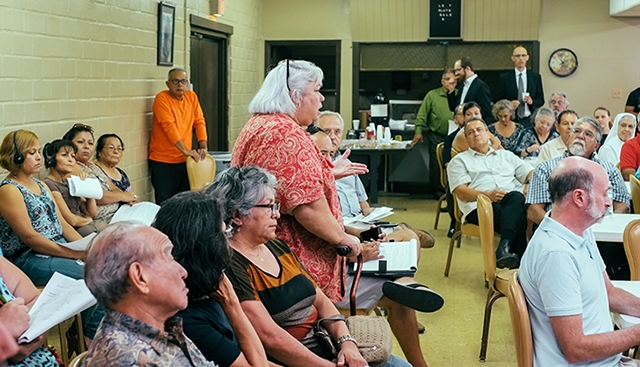