Leaders of COPS/Metro Alliance, together with other Network of Texas Organizations, will celebrate more than 40 years of organizing for change on Saturday, April 30, from 3 p.m. to  4:30 p.m. at the Thomas Edison High School Auditorium, 701 Santa Monica Street, San Antonio.

The assembly of more than 1,000 COPS/Metro Alliance leaders and local and statewide representatives will commemorate the legacy of the group and its accomplishments. (To see NOWCastSA’s living oral history map of COPS/Metro Alliance go to this link.)

Communities Organized for Public Service (C.O.P.S.) was founded in 1974 as a coalition of 26 parishes in mostly Hispanic, low-income West Side and South Side of the city.

”I can say unequivocally, C.O.P.S. has fundamentally altered the moral tone and the political and physical face of San Antonio," said former San Antonio Mayor Henry Cisneros in 1988.

In 1989, C.O.P.S. was joined by Metro Alliance, created by a merger of the East Side Alliance and the Metropolitan Congregational Alliance.

COPS/Metro Alliance improved neighborhoods and built a safety net for the most vulnerable. The groups transformed politics and continue to hold elected leaders accountable. (Click here for a NOWCastSA YouTube playlist that includes accountability sessions.)

Founding president Andy Sarabia says COPS/Metro “has been a vehicle which has taught regular, everyday people to learn how to converse, listen and organize themselves around common interests. Together effectively changing the political culture of our beloved city... Imagine San Antonio’s ZIP codes 78207 and 78258 working together, crafting an agenda for the future of San Antonio. Now that would be powerful!” 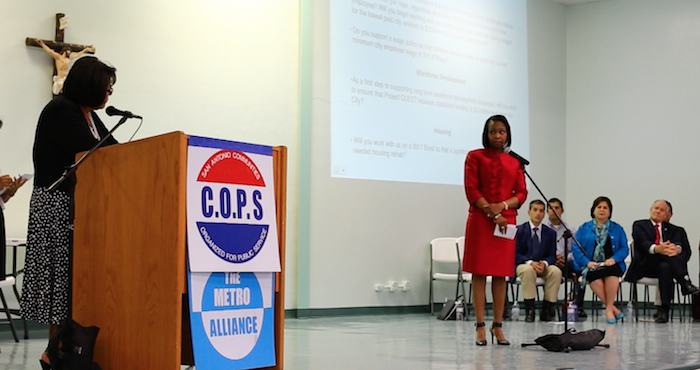