Members of COPS/Metro Alliance say the city’s bond-funded effort to encourage affordable housing in distressed areas is flawed, and hope the proposal will be retooled to meet current homeowners’ problems.

The grassroots group held a press conference on the front steps of City Hall on Wednesday, Dec. 14, prior to the City Council’s B session review of the housing bond part of the city’s planned 2017 bond.

Readers can watch the Dec. 8 Neighborhoods Improvements Bond Committee meeting below and read the full story regarding their recommendations for the City Council by following this web link.

Speakers at the news conference agreed affordable housing and redevelopment is necessary in many parts of San Antonio. But, they added, the bond’s “neighborhood improvements” category does not adequately address their worries.

Specifically, COPS/Metro Alliance urged the city to help homeowners repair and improve their existing older houses. Resident Rodrigo Rendon spoke of being hit by a car. Since then, as he struggled to recover, it has been a challenge to keep up with home maintenance.

He failed to get help from CPS Energy's Casa Verde program, which offers free weatherization and other energy-aving measures in older, eligible homes.

“We’re not looking for handouts, we’re looking for a sustainable program for people like myself, to make our homes livable again,” he said.

The Rev. Michael DeGerolami said, in his work, he has met many residents who live in older, deteriorating homes in the inner city. He said the city should try to better help them in some way.

“Do something to really help the people in the inner city and help provide suitable suitable homes for citizens of San Antonio,” DeGerolami said.

The neighborhood improvements bond would have a $20 million allocation within the $850 million total bond.

If approved by voters, the city’s Office of Urban Development (OUR SA) would use funds to acquire properties within 13 designated areas as recommended by a citizens’ bond committee. Eleven of 13 areas are inside Loop 410. They can be found on this map.

(Note that the former fire academy site, Interstate 10/Loop 410, Blanco Road/West Avenue and Naco Perrin all were removed from the final list, while two new areas were added: Culebra and Callaghan roads; and Oak Hollow along Prue Road.)

The money would enable environmental remediation, removal of dilapidated structures, cleanup, and infrastructure improvements on those properties. The council and its housing committee would review each acquired property. before purchase. OUR SA then would put recommend redevelopment projects through a request for proposals (RFP) process, with further review from the council and its housing committee. The urban renewal agency then would implement contracts for approved projects.

The areas are also included in an urban renewal plan, which the council will consider for adoption soon. The council is scheduled to officially include the designated areas during its A session Thursday, Dec. 15.

*Guidelines for the city and potential developers, such as a ratio of plans between nonprofit and for-profit developers, possible incentives, and what will constitute affordability.

COPS/Metro Alliance also proposed that Mayor Ivy Taylor and the council convene a gathering of stakeholders, including for-profit and nonprofit developers, banks, credit unions, congregations and community groups, to “craft a better and larger” proposal. Additionally, COPS/Metro Alliance suggested that neighborhood associations and community groups be part of process to ensure compatiblity of redevelopment projects, and the formation of a citizens' oversight committee to monitor the whole process.

Part of that recommendation, COPS/Metro Alliance members said, would support changes in the city charter. The charter currently does not allow the city to use bond money to directly affect housing.

By state law, indirectly, bond funds could only be used for new construction and not existing homes. A city charter commission is expected to look at a range of possible future amendments, including one that could allow the city to directly spend bond money on housing, but years from now.

Still, COPS/Metro Alliance members hope the city will find a way, more immediately, to support homeowners in need of repairing and rehabilitating their home.

“If the current bond proposal is not the right one for San Antonio, it is better to table it, fix it and bring the right solution to the community,” organizer Maria Tijerina said.

“We are here because we want to be part of the solution.”

The city does have, as Deputy City Manager Peter Zanoni told the council, limited resources for eligible homeowners. Some of those resources, such as Community Development Block Grants, are federally funded.

For the most part, during the B session, Mayor Taylor and council members expressed support for the overall effort to encourage affordable housing citywide. But they do want questions and other issues cleared up before formally calling for the bond election in February.

Zanoni noted that apartment rental prices in San Antonio, as a whole, are rising. He said the housing bond, as currently constructed, is designed to revitalize distressed areas and provide "much-needed workforce housing."

The owners of targeted properties may sell to the city's urban renewal agency on a voluntary basis. The acquired properties would be resold at "fair value" to the approved developer(s). Zanoni noted that the city would do everything possible to prevent displacement or relocation of current residents on a property targeted for redevelopment. Proceeds from property sales would go back into the program.

Jim Leonard, co-chair of the citizens' neighborhood improvements committee, said it is possible that not all areas will end up seeing redevelopment through the bond program because market forces will help developers determine whether they should or could build affordable housing according to the city's criteria in a designated area.

Council members did receive a copy of a list of recommendations made by COPS/Metro Alliance. Taylor and a few council members felt some of the points made during the press conference were germain to the current discussion. District 5 Councilwoman Shirley Gonzales, who represents one of the poorest areas in town, said she is worried that housing envisioned in the program would still not be enough to close the financial gap for individuals or families earning $31,000 or less a year.

Depending on the area, the envisioned affordable housing could range from single-family homes to multi-plexes, townhomes, multi-family apartments and mixed use. Gonzales also expressed concern that properties in the most blighted areas may still be unattractive to developers and, eventually, see no benefit from the program.

"This doesn't help people in my district," she added.

Other council members acknowledged that many residents may not fully understand the intent of the housing bond proposal. However, members such as District 4's Rey Saldana said it's a worthy objective.

"The bond can do many things to address existing needs in these neighborhoods," he added. 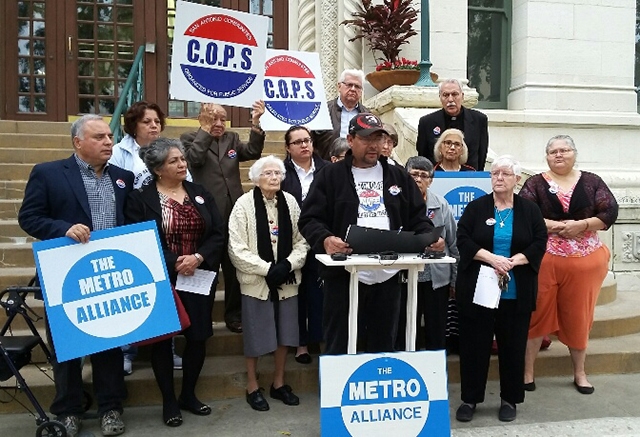