C.O.P.S./Metro’s main goal at the workshop was to get people on board with having the minimum wage raised to a livable wage of $15/hour in San Antonio.

The meeting was passionate with members of the community cheering on several occasions at the prospect of increasing the minimum wage to help boost San Antonio’s economy from the bottom and middle out.

Amongst those who spoke at the workshop was Dr. Heywood Sanders, a Public Administration Professor at UTSA. During his talk, Dr. Sanders pointed out how San Antonio always seems to have “money for whatever some folks want,” when talking about The Alamodome project in the 1990s and alluding to the current streetcar situation in San Antonio.

Sanders also presented graphs showing how city staff has year-after-year, since 2008, underestimated the amount of taxes it would generate for the following years in the three main areas San Antonio generates revenue — property tax, sales tax and through CPS Energy. Underestimating future revenue has been especially true of sales tax and CPS Energy, as it is naturally harder to predict.

Underestimating future tax revenue is a problem, according to Dr. Sanders, because by consistently underestimating the amount of “next year’s” revenue, the city ends up not allocating as much money as it could have to public services, year after year.

Amongst those also speaking at the workshop was union leader and teacher Ed Ramos and Prof. Victor Carmona, who teaches Moral Philosophy at Oblate School of Theology.

After the speakers finished, the almost 200 residents at the workshop — made up of people from the churches and unions — discussed at their respective tables if they were for or against advocating for an increase in the minimum wage (at least for public employees as of now); and if so, estimate how many people they thought they could bring to the next meeting.

In the end, all tables agreed to the cause of Economic Justice in San Antonio, including raising the minimum wage, and pledged to bring more than 700 people to the next Economic Justice action assembly, which is scheduled by C.O.P.S./Metro Alliance to be on Nov. 16, 2014.

For more information, go to: http://www.copsmetro.com.

Also, see slideshow of Average Per Capita Income for all ten districts in San Antonio as of 2013 and see related stories: 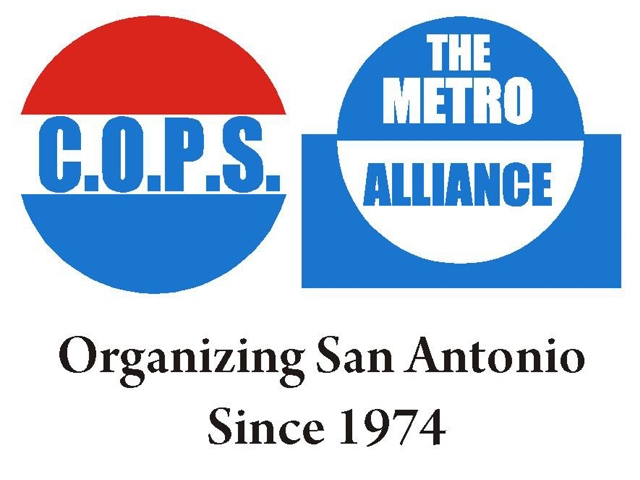