Members said they’d rather see money focused on repairing and improving owner-occupied homes citywide. Now, member parishes and institutions plan to persuade local officials and City Council candidates to see affordable housing as a priority issue ahead of the May 6 elections and beyond.

Speaking to more than 50 people at the Holy Redeemer Church parish hall, organizer Walker Moore said he and other COPS/Metro Alliance leaders frequently hear about the need to fix up older, owner-occupied homes.

The city is prevented by its charter from directly spending public funds on the development of new housing or rehabilitation of existing homes. Rather, the city relies mainly on federally funded Community Development Block Grants (CDBG) to support neighborhood improvements.

But of the $20 million of CDBG money available for 2017, $1.5 million was being allocated for rehabilitation of owner-occupied homes locally. Organization members said they often see homes in bad shape, especially on the West, East and South sides.

Sr. Gabriella Lohan described one East Side home where a woman in her 90s lived with her son. The home is in rough shape in various ways, she said.

“They’ve asked the city to help. Nobody comes to help,” she added.

“It’s a disgrace and something needs to be done about it,” he added.

She added homeowners who may be eligible for such programs still must meet a range of criteria before they are approved for work on their house.

Moore also explained how some residential developers take advantage of tax credit-based programs and initiatives toward new housing. But organization members said they see it as money that could be better spent on owner-occupied homes.

“So, we’ve got lots of problems,” Moore said, adding that it is unfortunate the housing bond is aimed only at new construction.

The city’s bond contains six individual propositions. One proposition, if approved by voters, would allocate $20 million to the city’s Office or Urban Redevelopment (OUR SA) under the “neighborhood improvements” category.

The OUR SA agency would buy vacant or abandoned properties from among 12 pre-selected areas of distressed; all but one of those areas are inside Loop 410.

Those properties would be cleaned up and have improved infrastructure. The properties then would be marketed to developers who must abide by specific criteria to get their affordable, workforce or mixed-income residential project approved by the City Council.

COPS/Metro Alliance held a press conference in December 2016, voicing concern with the affordable housing proposal. But one of their original worries appears to have been addressed. They had pressed local officials for a layer of accountability.

The council in December approved creating a Neighborhood Improvements Advisory Committee. Members representing neighborhoods would be appointed by the council. Moore recalled COPS/Metro Alliance’s initial fear that, without such a panel to oversee bond-funded projects, the city would be writing developers “a blank check.”

This spring, COPS/Metro Alliance leaders plan to ask their member parishes and other institutions to build up momentum. The idea is to “shift” - as Moore called it - the public discussion toward owner-occupied home issues. Organization members hope to have the discussion capture the attention of mayoral candidates and others running for the council this spring.

“There’s an opportunity for us to make hay, if we do our work right,” said Moore.

Moore told the crowd that COPS/Metro Alliance historically has addressed local issues such as adequate, affordable housing, but has not done so in a comprehensive way in recent years.

"This is our way to get our foot back in the door,” he added.

"We’re being called out once again to deal with the problems that exist. Money should go to housing, and that should be a rallying cry,” he added. 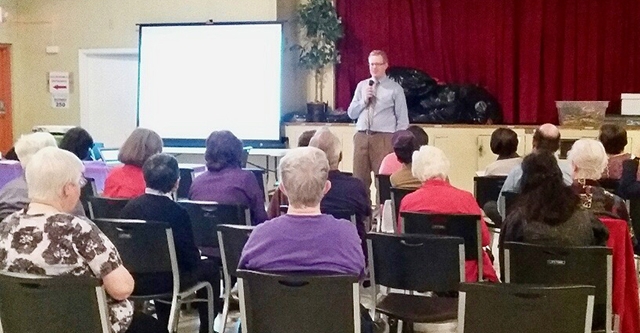