Scroll down to replay full video: Leaders from COPS/Metro, a coalition of churches, schools and unions, asked candidates for Congress and the Texas Legislature to support the coalition’s agenda on issues from public school funding and predatory lending to immigration and workforce development during its General Election Accountability Session Oct. 16, 2018 at Our Lady of Guadalupe Church in the San Antonio suburb of Helotes.

Prompted by questions from COPS/Metro, District 23 Congressional Candidate Gina Ortiz Jones, a Democrat, pledged, if elected, to pass legislation outlawing separation of immigrant families at the border, pass legislation providing a path to citizenship for DREAMers and to seek $2 million in federal funding for Project Quest’s workforce development program. COPS/Metro leaders said Will Hurd, the Republican incumbent, did not respond to multiple invitations to participate.

Earlier in the evening, Ana Esparza, a COPS/Metro leader with St. Bonaventure, talked about the inadequate funding in her school district and the impact on the students in the community. “We tried passing a TRE (tax ratification election) this past year, but it
barely failed because residents feared an increase in property taxes,” Esparza, said. “We would not be in this position if the state government was paying its fair share.”


COPS/Metro also took a stand against Proposition A, a measure on the ballot in San Antonio that would expand the types of issues subject to a referendum and lower the number of signatures to 20,000 to place an issue on the ballot.

Watch full video of the event 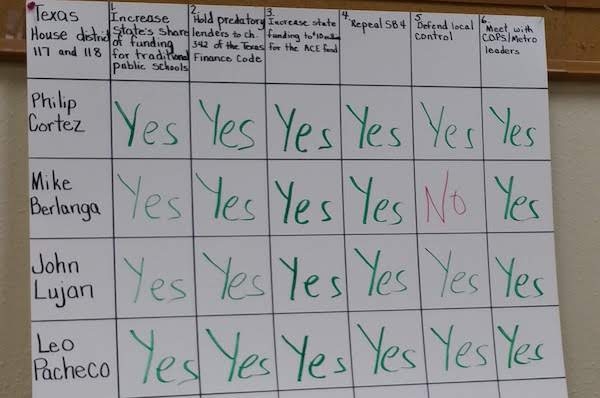