Counter to its promise, SA Tomorrow is scrapping neighborhood plans

In direct contradiction of a city ordinance and the promise of the SA Tomorrow Comprehensive Plan, city staffers are systematically eliminating long-standing neighborhood plans designed to protect the character and future of San Antonio’s urban core communities.

The news came as an unwelcome surprise to city council members at the Comprehensive Plan Committee’s April 19 meeting where they were being briefed on the $1.05 million SA Tomorrow Year Two consulting contract that is up for approval in May.

At the meeting’s outset, several residents and District 7 Councilwoman Ana Sandoval said the Comprehensive Plan process has failed to adequately include and engage residents and their ideas and concerns, and is methodically discarding their neighborhood plans.

Four days earlier, representatives of 22 neighborhood associations gathered at a Tier One Neighborhood meeting to plan a response and try to save their plans from extinction by the Comprehensive Plan. Watch complete NOWCastSA video of that meeting here. 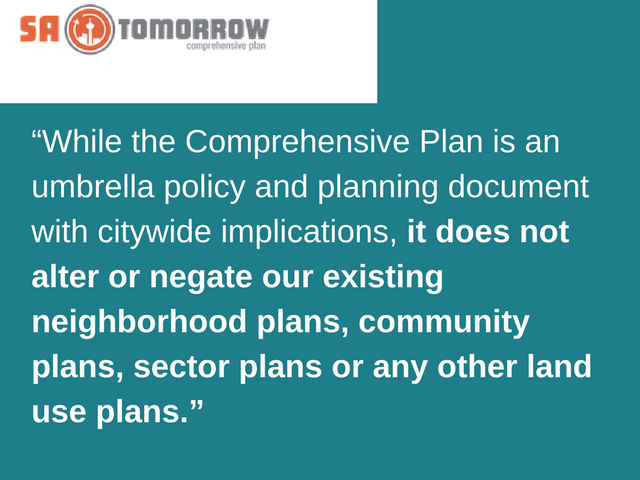 In its first chapter, the Comprehensive Plan link promises not to eliminate Neighborhood Plans.

“While the Comprehensive Plan is an umbrella policy and planning document with citywide implications, it does not alter or negate our existing neighborhood plans, community plans, sector plans or any other land use plans,” it says in Chapter One.

When City Council approved the Comprehensive Plan on Aug. 11, 2016, it unanimously adopted an amendment by District 1 Councilman Roberto Treviño to protect and incorporate neighborhood plans.

From the amendment: 1) “On page 17.10, include “Neighborhood and community plans should be respected, as appropriate, as they are integrated into the Sub-Area Plans.” 2) On page 17.14, include additional language related to neighborhood plans that strikes “replace” and adds “incorporate” so that the whole text reads, “The Community Plans should integrate and will eventually incorporate.”

“That’s not the way we understand the ordinance that established this,” said Grimes. He added when Phillips returned to the neighborhood association’s regular meeting April 17, “there was overwhelming opposition to abandoning the neighborhood plans that we spent hundreds of hours developing over the years.” (Click here to watch complete video of that meeting.)

In response, to Grimes' statement, Treviño pressed Planning Department Director Bridgett White for clarification on the Neighborhood Plans, each of which was adopted as an ordinance by city council and carries the weight of law. (Click here for a list of all 55 neighborhood plans )

“We've said in our process, and I want you to say for the record, because you can't say it enough, I want to be clear, that neighborhood plans are not going away,” Treviño said.

“That is incorrect Councilman,” White responded. “The neighborhood plans, when we do a sub-area plan, the neighborhood plan will go away. The land use will be incorporated into the plans and will also then have neighborhood profiles and priorities. But until we get to that sub-area, the plan is in place.”

“The neighborhood plans will be considered in the planning process of the sub-area plan,” White responded.

White said that the lengthy and detailed neighborhood plans would be reduced to a brief “recognition” and profile in the sub-area plans.

He was interrupted by Committee Chair, District 5 Councilwoman Shirley Gonzales. “No!” she exclaimed. “I mean, we don't know it. I mean, like no, right? I mean, we’re like…”

Gonzales turned to White: “There is still a tremendous disconnect between what you are doing and what the community feels like is happening.”

“I want to get back to some of the key points that Councilwoman Sandoval brought up,  and that’s, how we get there is really even more important  because we have to protect, maintain those authentic values that are within those neighborhood plans, and we need to make sure that we are reassuring and providing a real high level of communication that our communities can feel comfortable about the progress,” said Treviño.

Sandoval said her support will depend on improved community engagement. "I don't think we want people walking away from our processes feeling like their input wasn't helpful or meaningful," Sandoval said.

“When these things (consultant contract) come up for approval, I will want to know, how can you convince me the community was engaged in a meaningful way, and that the folks who are involved were from the area,” Sandoval told White.

“I want to make sure we have a quality engagement component, not just checking the box… I want meaningful public participation that is going to strengthen our decision-making,” Sandoval said.

Treviño directed White to give the committee a proposal on incorporating the neighborhoods and their plans to avoid future problems.

“And I ask you in the action plan, please lay out for us how our neighborhoods and their plans are going to be a part of this process. This is a request we’ve been making since we started all this,” Treviño said. “I think the idea is we can do an analysis that is much more thoughtful and much more considerate of what we’re planning for our future.  If you have community members who are concerned about how were are moving forward, and we’re not clear about it, that then we’re going to be right back in this same place again.” 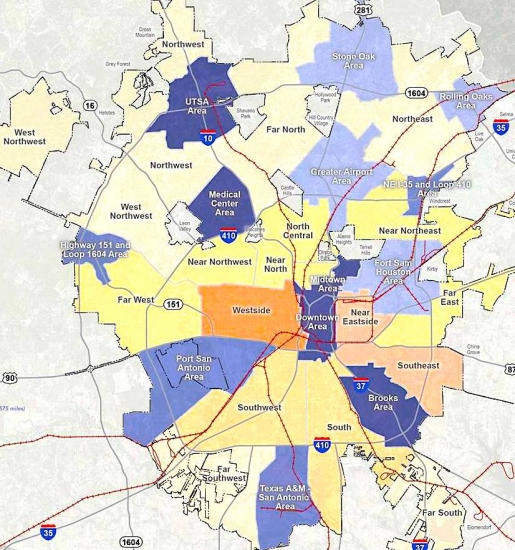