Updated Video: Highlights of citizenship ceremony for members of the military

They’ve already signed up to defend this country. Hailing from points across the globe, today, they became Americans.

Eight members of the U.S. military traded in their Green Cards for certificates of naturalization to become the newest citizens of the United States Friday in a moving ceremony hosted by the Mexican American Unity Council at its San Antonio headquarters.

The special citizenship ceremony was the official kickoff of the 2010 National Council of La Raza convention in San Antonio.

Janet Murguia, NCLR president and CEO, welcomed them with a heartfelt speech and applauding them for their service to the country.

"You have already given so much to this country in your service to the U.S. military," she said. "That is a testament to what you will contribute in this new stage of your lives."

Tearfully, she added, "We welcome you with open arms. And we thank you as you keep up your good work."

Airman Flomo, a native of LIberia, said, "I come from a country where civil war is the norm. Today,  I stand here, proud to wear this uniform. We are now all Americans. I thank you."

The eight then stood, raised their hands and swore allegiance to the United States. The audience broke into wild applause as the soldiers and airmen individually came forward to receive their certificates of naturalization.

Spec. Khaldy, arrived in the United States 22 years ago as an 18 year old accompanying his sister.

"Since that day, I fell more and more in love with America," he said. "This is a day I thought would never come."

The new citizens then led the crowd of about 130 people in the pledge to allegiance. At the finish, the room echoed in applause.

At that moment, their foreign names and accents became part of the American fabric, their names added to the mosaic of American names.

The NCLR convention continues through Monday.

This story has been updated several times. Photos by Heather DiMasi. 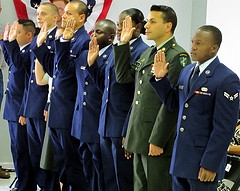