If you can't go in person for the unveiling of Phase I on Dec. 18, take this multimedia tour of the Mission Reach project as it transforms the San Antonio River on the city's South side, connecting neighborhoods and people ...

The river has always been there. And now it's changing in ways that are part engineering, part alchemy.

Jason Stevens and his wife, Leslie Raymond, watch backhoes rip dirt from the banks of the San Antonio River downstream from Roosevelt Park. To them, it sounds like music. "Some residents are worried that the project would raise property taxes or home values too much," Stevens said. "But we don't see drawbacks. We've seen what was a ditch turned into a park. Soon, it will be a place where neighbors can come together."

The eight-mile transformation of the river through the South Side from a weedy concrete ditch to a more natural-looking landscape of hiking trails and bike paths is the Mission Reach part of the San Antonio River Authority's ambitious river improvement project that creates a 13-mile linear parkway.

More importantly, Mission Reach will tie the city together from the river’s source at Incarnate Word University on the North to Mission Espada, just below Interstate 410 on the South.

Civic and business leaders see Mission Reach as an economic and psychological godsend for a South Side community that has long been ignored.

"The North Side has always seen the South Side in a negative light, a place of crime and bad things," said Candie Beltran, a lifelong resident and president of the Roosevelt Park Neighborhood Association. "This project will change the South Side forever, reconnecting the city and breaking own all those barriers between North Side and South Side."

The river has always been there. Native Americans, who camped and hunted along its banks, knew it as 'Yanaguana," which translates as "refreshing waters." Spanish explorers came in 1691, naming it in honor of Saint Anthony. They returned to set up an outpost in 1718. For centuries, the river served as the city's main artery of life and culture. Fifty years ago, a federal flood control project smoothed and straightened the river along the South Side, concreted the banks and turned it into a large ditch.

Planning for the overall project began in the late 1990s to improve the river north and south of the existing San Antonio River Walk, a Depression-era project that is now a downtown tourist must-see.

Museum Reach, the northern portion of the project, was completed in May 2009. It ties the river from the San Antonio Art Museum to downtown, and has already given birth to a renaissance of the the old Pearl Brewery into a complex of cafes and living spaces.

A three-mile extension now completed runs from the River Walk south past the Blue Star Art complex on Guenther Street to the start of Mission Reach near the old Lone Star Brewery.

The finished South Side project, scheduled for completion in mid-2013, will serve as a 13-mile linear park of hiking trails, bike paths and neighborhood access that runs nearly the length of the city. Change doesn’t come cheap. The tab for the entire project is $384 million, with the Mission Reach portion costing $271 million.

Earlier cost increases, as well as delays in release of federal funds for the project had some on the South Side fearing Mission Reach would be another unkept promise.

County Judge Nelson Wolff, a child of the South Side, knows too well how the area was left behind as San Antonio grew and prospered. Other parts of town got the medical centers and business headquarters. The South Side got the sewage treatment facility and meat-packing plant.

People had concerns that, once the section through the North Side was done, money would run out for the South Side,” Wolff said. “We wanted to make sure there was money to get it done. We wanted to remove all doubts."

As the project came closer to reality for the South Side, the county kicked in $127 million, then pledged an additional $97 million of county funds to ensure Mission Reach would reach completion.

A major part of Mission Reach is undoing work begun 50 years ago by the U.S. Army Corps of Engineers that straightened long portions of the river as part of flood control – and left the river an eyesore.

For years, the San Antonio River was the city’s backyard, forgotten,” Wolff said. “Now, it’s going to be the front door to the South Side."

The Mission Reach will restore the river to a more natural state, by planting native grasses, plants and trees and reclaiming more than 113 acres for aquatic habitat.

Mission Reach will link the river more directly with South Side neighborhoods, giving residents better access for recreational use. Also, the project calls for construction of "portals" at each mission, marked with special stone gateways, that will link directly to the river, making it easier for visitors to reach.

Cindy Taylor, president of the South San Antonio Chamber of Commerce, stresses that Mission Reach has already served as a catalyst for new development such as transformation of the old Mission Drive-In of Roosevelt Avenue into a 1,400-square-foot retail center and space for a new city library.

Mission Reach will prove to be the most important growth generator for the South Side,” Taylor said. “But the key importance is that it is controlled growth, emphasizing quality of life on this side of town. It’s 13 miles of green space that reconnects the city. And it’s long overdue.

For more information on Mission Reach and the San Antonio River Improvement project, go to www.sanantonioriver.org/. 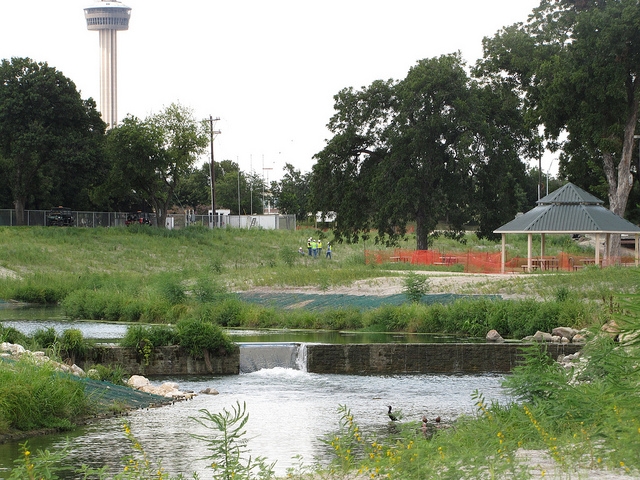