Defenders dig in for battle over Alamo Plaza

The battle lines are drawn over Alamo Plaza.

Leading the charge to defend the iconic public space is the San Antonio Conservation Society, which has collected 7,500 signatures on its Petition to Save Alamo Plaza.

Under the proposal to be considered by San Antonio City Council on Oct. 18, the city would give up control of Alamo Street, the Plaza and the open space within the footprint of the original Alamo compound to the Texas General Land Office. The area will be gated to restrict access, and will no longer be a public forum. The General Land Office has said the First Amendment will not apply within the property it controls.

The Conservation Society petition pushes back:

“No fences! No locked gates! No vanished historic elements! No street closures! Don’t let the State dictate how you will access and experience Alamo Plaza; it belongs to to all of us,” the petition says.

“Great cities have memorable plazas: open spaces within the urban fabric that remain versatile in their use. Great cities embrace their history, preserving their built environment AND their cultural history,” the petition says.

The Conservation Society posted a document raising several questions about the proposed lease agreement between the City of San Antonio and the General Land Office. "The lease agreement negates almost every aspect of local control the City has historically exercised over this vital area of downtown," the document says (read more here).

District 9 City Councilman John Courage joined the Alamo Plaza defenders in an email to supporters on the eve of the council vote. “My vote on the lease agreement will be a ‘No’ unless we are able to maintain the plaza as a free and open space,” Courage’s email said.

According to the San Antonio Express-News, Councilwomen Shirley Gonzales and Ana Sandoval also expressed concerns, and Councilman Clayton Perry referred to the barriers to accessing Alamo Plaza as “my line in the sand.” 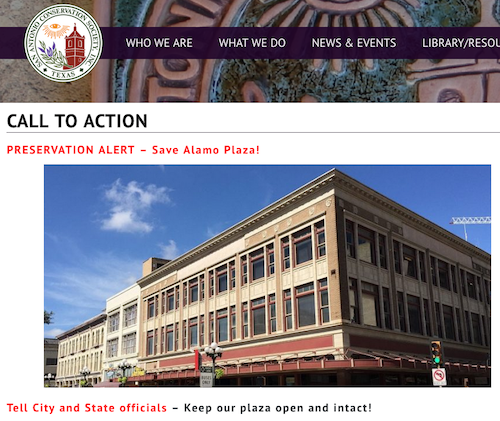